After getting its own live-action movie greenlighted last year by American production company Legendary Entertainment, the most popular Pokémon might only be a few weeks away from putting its name on a mid-range Android smartphone.

Before you’re overrun with excitement though, let us stress Sony Pikachu is probably an internal codename and nothing more, especially considering the traditional rivalry between the Japanese gaming and mobile tech giant and compatriot Nintendo, which is the sole owner of the Pokémon trademark and, presumably, all associated monikers.

We have a pretty good idea of how this Sony “Pikachu” will be called once it goes official too, likely following in the footsteps of the original Xperia XA. It’s either the XA 2 or XA (2017) therefore, or perhaps XB, with the same mediocre 5-inch 720p display in tow, according to a pair of equally credible pre-release benchmarks. 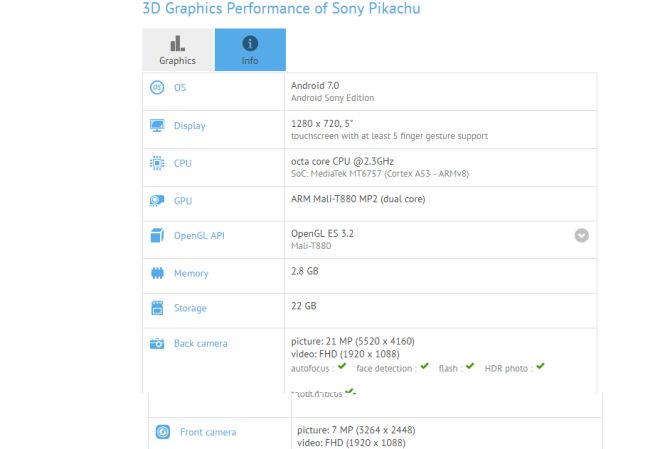 On the bright side, last year’s humdrum 13MP rear-facing camera should apparently be upgraded to a 23-megapixel unit, while the Helio P10 processor and 2GB RAM get promoted to P20 and 3 gigs of random-access memory.

You’ll also be able to choose from 32 or 64GB internal storage options, with microSD support probably on deck as well, and Android 7.0 Nougat running the modern software show out the box. Bottom line, this won’t catch beat them all, but priced aggressively enough, it could score its 15 minutes of fame at MWC, alongside the slightly higher-end 2017 Xperia XA Ultra edition.