You don’t have to be psychic to guess Sony must be hard at work on a bevy of next-gen Xperia smartphones, including a long overdue redesigned flagship with trend-following thin bezels and a 2:1 aspect ratio.

Unlike the presumed XA1 and XA1 Ultra sequels however, this mysterious Xperia XZ Premium follow-up is breaking cover today thanks to an unverified and unverifiable source.

We have what looks like a presentation slide (in Chinese) of a device carrying the model number H8541, featuring the near-complete spec sheet of a high-end 5.7-inch Android handset.

The whole thing is a little too detailed and too good to be true, which typically means it’s not legit, but then again, if this were a fan-made hoax, we’d surely see the as-yet unreleased Snapdragon 845 processor listed here. 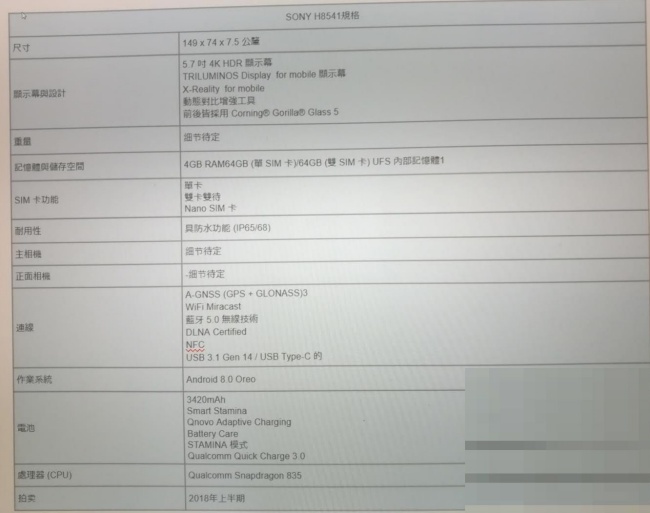 Instead, the H8541 is expected to pack a rapidly aging Snapdragon 835 SoC paired with 4GB RAM and 64GB internal storage space, which sounds like a classic Sony disappointment.

On the decidedly bright side of things, the 4K HDR-enabled 5.7-incher is said to measure 149 x 74 x 7.5mm, which would make it significantly shorter, narrower and thinner than the Xperia XZ Premium. Compared to the competition, it would also be thinner and roughly as tall as Samsung’s Galaxy S8, but slightly wider.

All in all, the physical measurements certainly fit our expectations for a bezel-shrinking 2018 Xperia high-ender, and H8541 could follow the G8141 designation of the XZ Premium. The rest of the features seem reasonable as well, including a 3420mAh battery with Quick Charge 3.0 capabilities, Android 8.0 Oreo software, NFC, USB Type-C, and IP68 certification. No words on cameras just yet.