There’s a Snapdragon 845 processor inside a pre-release prototype of the Sony H8266 smartphone expected to follow the Xperia XZs and Xperia XZ1.

Sony’s high-end Android smartphone lineup has always been a little messy and confusing, and it certainly doesn’t help us understand the Japanese company’s plans the way rumors and leaks are coming from all directions lately.

There appear to be at least three powerful Xperias in the pipeline, although seeing as how the XZ Premium and XZs were announced back in February, followed by the XZ1 in August, we don’t reckon all three will be unveiled at the 2018 Mobile World Congress.

Instead, we only expect a flagship-grade H81xx sequel to the Xperia XZ Premium and a slightly lower-end XZs follow-up carrying model number H82xx to see daylight in the early stages of next year.

Basically confirmed to sport a conventional Full HD screen with a 16:9 aspect ratio in a user agent profile a couple of weeks ago, the H8216, also known as H8266, H8276 and H8296, was further revealed as featuring a Snapdragon 845 processor, 4GB RAM and 3130 mAh battery earlier this week. 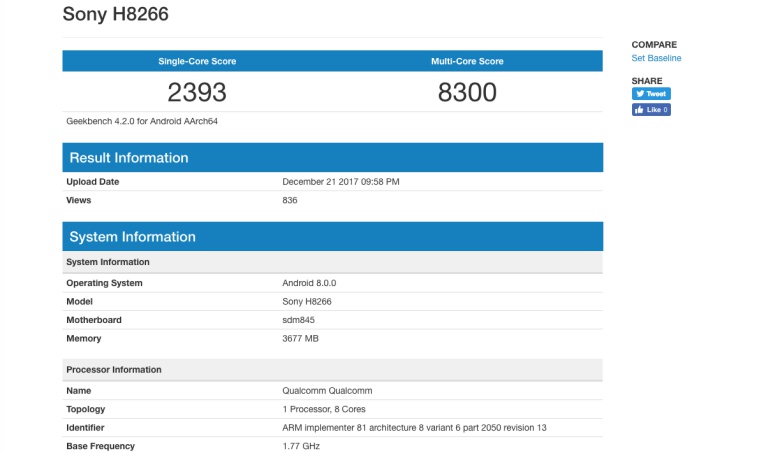 But that surprisingly detailed info came from a rather sketchy source, so it’s nice to be able to verify some of it today thanks to the all-knowing folks over at Primate Labs. Their “leading” processor performance analysis tool was just used to assess the raw speed of a no doubt advanced Sony H8266 prototype.