A likely Sony Xperia XA1 Ultra sequel has been benchmarked with the same 6-inch Full HD screen in tow, but an improved rear camera and two selfie shooters.

After surprisingly launching a fairly modest Xperia R1/R1 Plus duo designed for India, Sony is unlikely to unveil any other new phones by the end of the year. The Japanese OEM’s high-end and mid-range lineups are already pretty crowded… and confusing, while finally moving to a revamped flagship design probably requires a little more prep time.

But that doesn’t mean next-gen Xperias aren’t in testing already, and a sequel for the jumbo-sized XA1 Ultra may have just been publicly benchmarked. Intriguingly codenamed the “Avenger”, this carries an H3213 model number that seems to follow the G32xx designation of the aforementioned 6-incher.

The display size, Full HD resolution and “traditional” 16:9 aspect ratio are unchanged, according to GFXBench records, but under the hood, Qualcomm supplies a (not so) mysterious octa-core 2.2 GHz CPU replacing MediaTek’s Helio P20. The accompanying Adreno 508 GPU makes us quite confident we’re looking at a popular mid-end Snapdragon 630 SoC currently found inside devices like the Moto X4, Nokia 7 and HTC U11 Life. 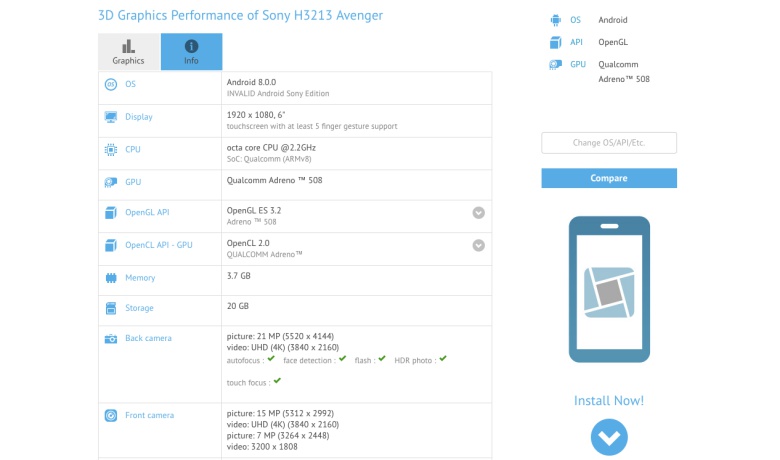 The truly interesting part of the prematurely revealed spec sheet are the cameras however, including a 23MP rear shooter with 4K video recording capabilities and two front-facing sensors. The main one apparently sports 16 megapixels and is capable of shooting 4K content too, while the secondary lens “settles” for 8MP.

This could be Sony’s very first smartphone to offer a dual cam setup, also featuring 4GB RAM, 32GB internal storage, and Android 8.0 Oreo software. Of course, pre-release benchmarking info isn’t always 100 percent accurate, so it’s probably best to wait for a CES or MWC announcement early next year before getting too excited.