It’s a feature that’s been introduced into a beta version of the latest Marshmallow AOSP. And it’ll help the battery not destroy itself quickly.
Published 22 June 2016, 05:59 EDTUpdated 02 April 2021, 09:52 EDT 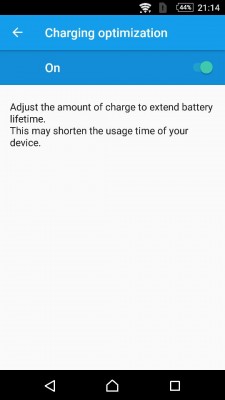 They can charge fast. Real fast. And for too long, too. That’s what makes them go “sizzle.” Or, worse yet, “boom.”

They can charge slowly. Real slowly. Like, when you absolutely, absolutely need power before you hop on the bus in three minutes and your phone still says two percent.

One thing for sure is that they can only last for so long. And batteries deteriorate faster the hotter they get. Sony’s thinking of doing something about it with an additional feature to its Marshmallow AOSP beta firmware for the Xperia Z2 and Z3 called “Soft Charging.”

It’s a simple on/off toggle that’s likely paring down the charging current — which should keep the battery’s temperature down as a byproduct — and that should help the cell in the long-run. Of course, effect number two is that you’ll have to wait even longer for your phone to charge.

Soft charging seems like a great idea for those overnight soaks. Do you think it should be a feature taken up elsewhere?