Check out the killer specs on the Snapdragon 805 tablet for developers, shipping in just a few weeks.
Published 04 April 2014, 16:31 EDT

Qualcomm announced its Snapdragon 805 all the way back in November, and we’re still waiting for it to show up in commercial hardware. Rumors have suggested that Pantech might be first to take advantage of the 805 with its Vega Iron 2, but that’s not yet confirmed. When will we actually be able to get our hands on this advanced silicon? Well, it’s clearly not a consumer-focused product, but a Snapdragon-805-based Mobile Development Platform Tablet is set to become available for devs in just a few weeks.

A couple years back we looked at an earlier MDP/T, when Qualcomm was then introducing the S4 Pro APQ8064. In fact, compared to that $1300 tablet, this new 805 MDP/T is practically a steal, priced at just about $800.

We realize that we shouldn’t even be tempting ourselves with a developer device like this, but the specs are just too good to ignore: 10-inch 2560 x 1440 display, 3GB of RAM, 64GB storage (with microSD expansion – and it comes with an 8GB card), and a 13MP main camera. Up front there’s not just a 2MP front-facer, but a pair of dedicated cameras for capturing 3D in-air gesture input, helped out by an IR light source. There’s even support for an ultrasonic stylus. Color us impressed. The only big downside is the meager 3400mAh battery.

Enough with the teasing; what does this tablet’s release mean for you? Well, even if’s not the sort of thing you’ll be picking up at your local electronics store, the MDP/T is still important because it’s going to get devs started at crafting apps designed to take full advantage of all the 805’s processing power. That means that when 805-based hardware starts becoming popular, there should be plenty of software ready to really show it off. 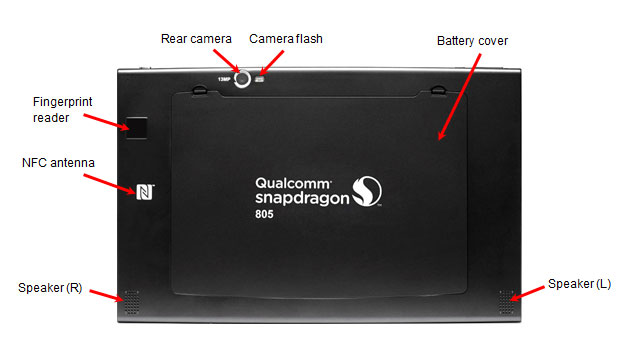