Here are the main advantages of having a Snapdragon 800 SoC

The Snapdragon 800 is an amazing processor, but why would you want to get something so powerful? Let’s take a look!

Just so we’re all on the same page, a System on a Chip (SoC) is an integrated circuit which combines all the core components of an electronic system into a single chip. Depending on its use, it might include digital, analog, and mixed-signal processing, and typically includes various radio-frequency functionality. Blah blah blah. It’s the chip that powers your phone or tablet. Got it? Good, let’s get into the really interesting stuff!

SoCs are made by manufacturers including (but certainly not limited to) Intel, Texas Instruments, Apple, Samsung, Qualcomm, and more. Today’s industry leader is arguably Qualcomm’s Snapdragon 800. Here are the advantages this little miracle of engineering has, and why you might want to make sure this SoC is in your next smartphone and tablet.

Innards of the Snapdragon 800

To get a good idea why the Snapdragon 800 is such a great little package, let’s look at its insides, shall we? Yes! Let’s! 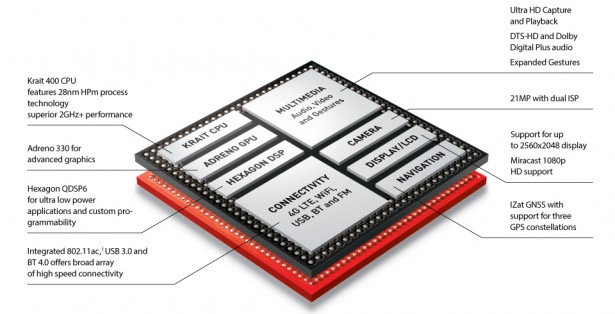 Integrated circuits carry electricity through them. Electrons like to travel freely, but there’s no such thing as a “zero-resistance” circuit. Electrons have to travel through something. When they do they generate heat. This heat slows things down (both physically and through thermally controlled throttling of the chip’s clock speed), and it wastes precious energy (not in a “tree-hugger” kind of way, more like “hey, my battery isn’t big enough!”). To combat this (and to save money in raw materials, too), chip builders make their circuits small. In the case of the Snapdragon 800, its transistors measure only 28nm.

That’s small. How small is it? I’m glad you asked! A sheet of paper is about 100,000 nanometers thick — almost 3600 times thicker than what we’re talking about. A strand of human DNA  is 2.5 nanometers in diameter — that’s only ≈10 times smaller than the technology inside the Snapdragon 800! By comparison, the original transistor built by Bell Labs in 1947 was large enough that it was pieced together by hand. 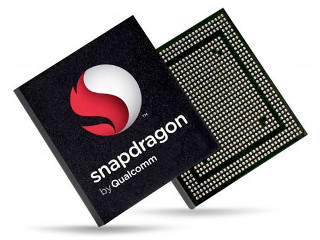 The Snapdragon 800 itself is capable of UHD video capture and playback, and supports cameras up to 21 MP. If you’re a camera buff, whether you’re into moving pictures or stills, this chip is brings a lot of muscle! Of course it’s ultimately up to the OEM who builds a system based on this chip to pair it up with a camera that will suit your needs.

Are you more the type who likes to look at images and watch movies shot my others than create them yourself? The Snapdragon 800 supports resolutions up to 2560 x 2048, Miracast 1080p, and support for both 1080p and 4K external displays. Your videos are going to look amazing!

It includes support for both USB 2.0 and the super-fast and faster-to-charge USB 3.0. We haven’t seen USB 3.0 in very many devices yet, but whether we need it or not, it’s coming.

Of course I’ve saved the best for last! With speeds of up to 2.3GHz running on each of its four cores, high-speed data delivered by 802.11ac or 150Mbps over LTE, devices powered by this chip are fast. They’re really fast! And to top it all off, with advanced power management, we’re promised the best battery life we’ve seen to-date. I’m not holding my breath, but I’m hoping it’s true!

Who needs all that power?

We were recently asked why someone would need all that power inside a smartphone. Why not go with a Snapdragon 600, or even a 400? It’s a valid question.  Aren’t 800’s more appropriate in tablets and even netbook/laptop computers? On the surface, yes, absolutely, but once you peel back what’s going on with apps these days, you might want to reconsider.

When you look at an app on a smartphone versus a tablet, you would be correct to say that a tablet generally needs more processing power. Why? Stereotypically, tablets have bigger screens, which gives the impression that they have more pixels to power. Remember that as screen sizes double, the amount of pixels to compute goes up by a factor of four. 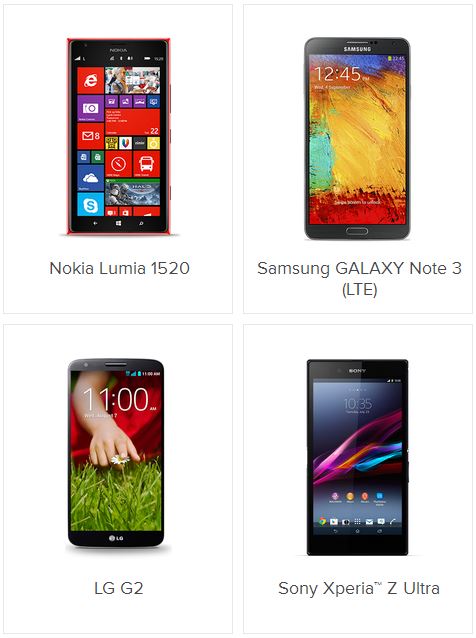 Not long ago I had the opportunity to take the original Android for a spin — the T-Mobile G1. It was every bit as fast and snappy as I remembered it to be when it was brand new.

Then I started installing apps. The apps weren’t nearly as fast as I’d remembered them. Sure, they looked nicer and had new features, but they were so slow in comparison to their older versions.

Some of this can be chalked up to nostalgia and selective memory, but a lot of it is because apps keep getting bigger, better, more feature-filled, and capable of doing things we might not have imagined when the original version of an app was released. The same goes for operating system updates.

In other words, as apps and operating systems improve, we need more powerful hardware to run them.

To combat this, we need to do our best to future-proof our current hardware. Many of my friends have gotten “inexpensive” phones and tablets because they’re “cheap”. I’ve opted for high-end devices, even though they’re “more expensive”. When one looks at the numbers, a different story is told. Some of these friends have gone through three phones at a cost of US$200 each in the last year, because their old phone was “too slow”. (That’s $600 for those of you keeping track.) My Nexus 4 cost me $360. If you don’t count the repair cost to fix my cracked screen, my “expensive” phone was almost half the price of their “cheap” phones. Why? I bought hardware that was blazingly fast when I first got it, and is still plenty fast for me today. We haven’t even tried to figure in the cost my friends spent “waiting” on their “cheap” phones. After all, time is money.

While we could go into technical details all day long, the bottom line is that (at least for now), the Snapdragon 800 is either at or very near the top of the pile when we talk about SoCs. Any phone or tablet that you buy that’s powered by this beast will be amazing for you right now… and your investment will pay off again and again the longer you’re able to use it.

A new leak has now surfaced online from a credible source, and says that the Galaxy Z Flip will be priced at an eye-watering $1,400 upon its debut.

A new leak has now surfaced online from a credible source, and says that the Galaxy Z…