The Apple Watch holds strong in the market after a great holiday season while the market in general has blossomed from a year ago.

It may seem like a dull period for smartwatches with nothing exceptionally big, new and inspiring having appeared this trade show season — though major releases targeting women were needed to bring them into the market. Maybe our editorial attention spans were just too short after having to inspect over a year-long parade of smartwatches. But this is a growth market and research firms have the metrics to confirm it. 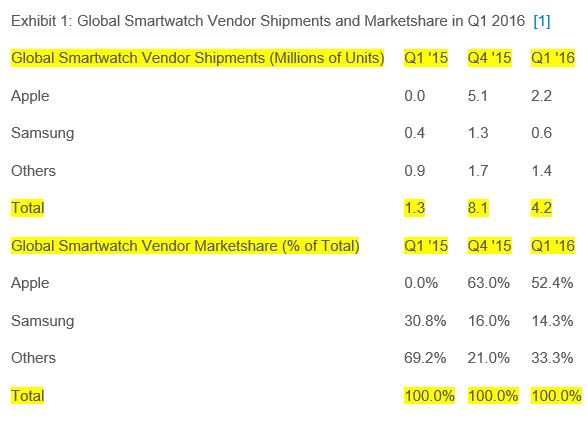 Strategy Analytics measured 4.2 million total shipments for this past winter quarter, 223 percent better than the 1.3 million in the period last year. 2.2 million — or 52 percent — of those shipments were of the Apple Watch while Samsung captured 600,000 units for 14 percent of the market. Apple had a share percentage of 63 in the holiday quarter while Samsung was at 16. The Gear S2 devices may be proving to be the only real healthy competition, but with Apple putting the price chopper on, Cupertino is definitely determined to sustain in the field.

Android Wear falls under the “Others” category, which is quite unfortunate for the platform, but Neil Mawston, the firm’s Executive Director, said that “competition from LG, Motorola and others is ramping up fast,” and most of those players release Android Wear devices. We don’t know exactly what other operating systems come under the umbrella, but “Others” did improve to 1.4 million shipments for the quarter, a 55 percent jump year-over-year and good for a third of the market.