Why haven’t we seen a smartwatch for women?

Smartwatches are heavily geared towards men. They’re big, bulky, and masculine. Read on to learn why we have yet to see a smartwatch for women.
Published 16 January 2014, 17:30 EST

Few will argue that wearables aren’t the next big thing. Fitness trackers, smartwatches, and face-mounted displays were in full force at CES last week. And the term “wearables” is plastered all over every tech site on the Web.

While not everyone quite understands the usefulness and importance of peripherals for smartphones with glanceable, easily accessible information, the attention the few important devices are getting in this brand new market is telling of just how ready we are for the next big thing.

Several of us here at Pocketnow have been following the blossoming smartwatch market since before the Pebble Kickstarter campaign and Google Glass upended the space. In fact, I watched the inPulse smartwatch by Allerta – the same people behind Pebble – very closely through its trouble-filled launch. And I very nearly pre-ordered one, but luckily made the right call not to, after the product suffered countless delays. 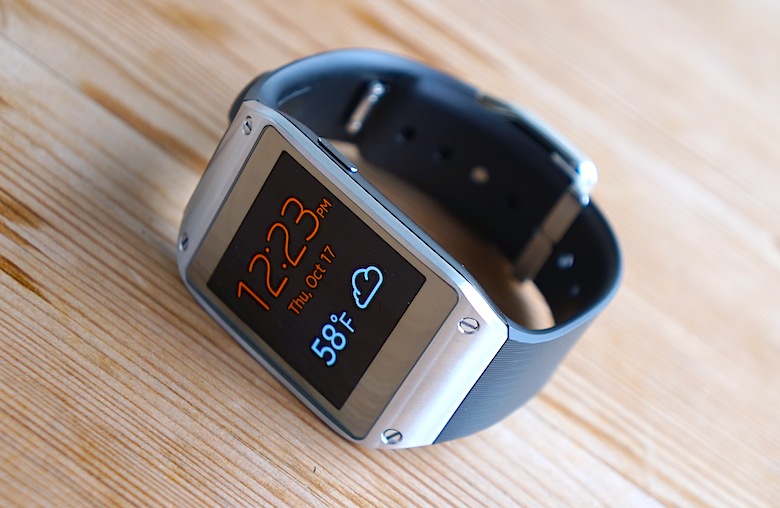 Fast forward a few, short years, and the landscape has changed quite a bit.

Pebble is no longer the only company making a smartwatch. Samsung, Archos, Sony, ZTE and a handful of lesser known makers have already created wrist-mounted notification systems. Apple, Google, and practically every other notable mobile company are also rumored to be making smartwatches of some sort, as well. And for that, we are especially excited.

Unfortunately, while wearables had its first major push at the Consumer Electronics Show in Las Vegas this year, the trade show didn’t yield many impressive wrist-mounted equipment. We did, however, get Pebble Steel, which is easily the most fashionable and beautiful intelligent watch yet. But Pebble Steel paired with the dozen or so watches we deliberately chose not to cover at CES are very telling of a problem in the wearable industry. 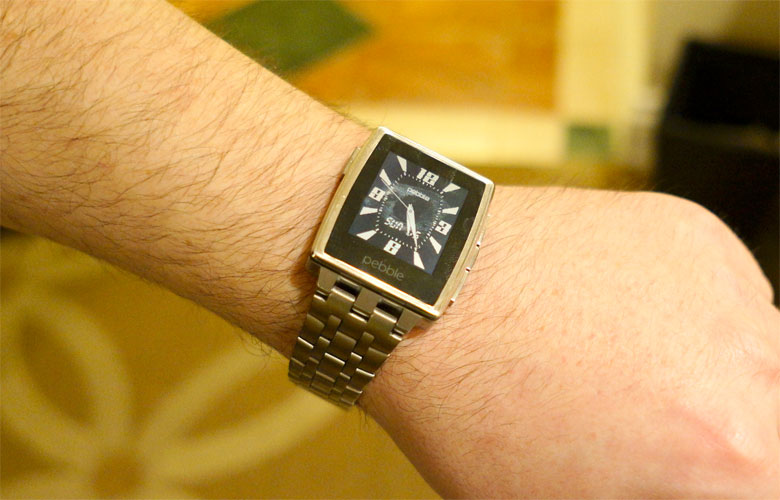 The tech space is still heavily skewed towards men.

That’s no secret. The brunt of our readership and viewership is men. Our team consists entirely of men. And, by comparison, the male demographic is more interested in technology.

But that hardly means women aren’t interested in technology, don’t read our site, or don’t want to work with us. There are plenty of reputable women in the industry, and we have a handful of “regular” female commenters. And, believe it or not, I have a handful of female friends who love technology and geek out just as hard as I do over new products.

While the bias towards men in this industry has been a growing problem all along, this wearable sector is about to blow it wide open for one, simple reason: fashion.

While fashion and technology have been loosely related for years, by way of computer and cell phone cases, you don’t wear your phone (unless you’re one of the die-hards unwilling to give up your belt clip, in which case fashion is unbeknownst to you). 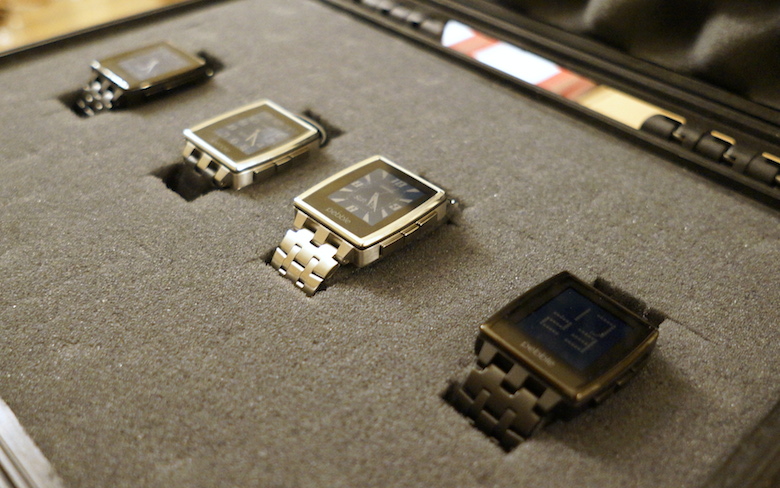 Wearable technology, on the other hand, is directly tied to fashion. And when fashion is brought into the equation, gender-specificity becomes an issue.

Ever since my Pebble arrived in April, I’ve had just as many women as men show interest in the device incessantly buzzing on my wrist. A question about why my watch is buzzing and displaying messages always leads to more questions about what the device does, its price, and if it’s worth the money. Almost every female who has ever asked me about Pebble as always followed-up with another very important question: “Is there one with a smaller face?”

Before anyone jumps down my throat for being an ignorant sexist prick, I understand some men want a smaller Pebble, too. And some women are just fine with the Pebble in its current state, accessorizing with an aftermarket watch band. But that’s not the issue; where the wearable industry is headed, however, is.

The original Pebble, which I’ve seen a handful of women wearing, is less of an issue. Its silicon band and (sometimes) colorful faceplate is infinitely more gender-neutral than its successor, Pebble Steel.

During the time I had to play with Pebble Steel and try it on, the matter slipped my mind. But going through the pictures just hours later, I couldn’t help but think, “What about women?” With its brushed steel or PVD coated frame, masculine, hard lines, and wide leather band, Pebble Steel is largely targeting the male demographic while alienating females who might want a high-end smartwatch.

That’s not to say some women wouldn’t mind wearing Pebble Steel. But there’s a definite and clear disconnect between the technology and fashion markets.

Walk into a watch store. There is a dividing line down the center. Women’s watches – which typically have smaller faces and narrower bands – are on one half, and the bulkier, more masculine men’s watches reside on the other half of the store. Sometimes, there is some gray area between the two. But there is typically a distinction between men’s and women’s watches – they’re largely still fashion items.

To my knowledge, no notable smartwatch maker has made an effort to appeal directly to women buyers yet. And that’s truly unfortunate. 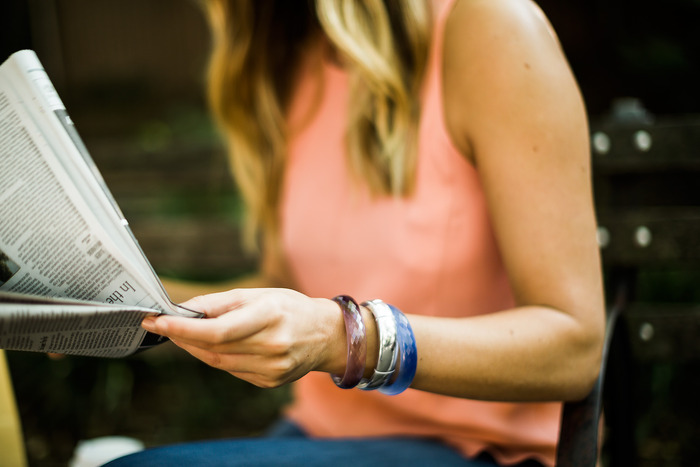 MEMI – a smart bracelet made by women, for women – popped up on Kickstarter in late October. And the $100,000 campaign succeeded 30 days after its start. There is a definite demand for such a product.

MEMI is a start. But it’s not a smartwatch. It’s a “smart” bracelet. It has no display and only buzzes when people you mark as important call or text. Oh, and it’s only compatible with iOS – no Android or Windows Phone support.

To answer the question why a smartwatch for women hasn’t happened is pretty simple. Size constraints are a problem. Manufacturers are cramming some serious technology in devices which were previously only meant for keeping time. Every cubic millimeter counts, and shaving down the face size causes even more problems.

Pebble bragged to us about cutting the bezel away on the Steel. Hats off to them, too. Pebble Steel is beautiful and a turning point for the industry. But just because it’s difficult to make a smaller smartwatch doesn’t mean every new watch has to be big, bulky, and blatantly masculine. Women and men with smaller wrists want smartwatches, too.

I’m not one of those people. Pebble Steel looks right at home on my wrist. But there are plenty of people who feel the current state of smartwatches is one-sided and gender-specific.

How difficult would it be for Pebble to add some more curves to the face of Pebble Steel and make a narrower band option?

Women out there, would you wear Pebble or Pebble Steel? What about Galaxy Gear, a Sony SmartWatch 2, or any of the current offerings out there? If a narrower, smaller Pebble or other smartwatch were available, would you buy into the new wearable field?