Why are smartwatch flat tires still a thing?

From the time it came out, I loved the Moto 360. I was stoked as I was able to represent Pocketnow at Motorola’s headquarters in Chicago for its debut. Of course, I was immediately saddened that I had to then mail the Moto X and Moto 360 to Joe Levi, leaving me empty and alone. Ok, so it wasn’t that bad, but it felt like it and I’m a human being, ok? Sorry. Got a little lost there. I’m back now.

But one thing that has always bugged me about the Moto 360, and the second generation of Moto 360 and my current Moto 360 sport, is that darn flat tire. You have to remember that little trip over to Motorola HQ was all the way back in 2014. It was a different time. That was almost two and a half years ago! Haven’t we evolved past the flat tire by now? Apparently not, because my Moto 360 Sport still needs air. And it’s not just the Moto 360; other OEMs have unfortunately followed suit.

But before we go off into a rant about how a Moto 360 would be better than a Moto 290 (give or take), it should be mentioned that Motorola has already considered a perfectly round bezel and rejected it, based on some reasonable and rational objections. The main reason there is a flat tire is because that is where sensors are located. If you look closely at the flat tire – and be forewarned, once you see it, you’ll never un-see it – you’ll see a tiny dot in the middle of it. There’s your sensor.

The flat tire is where those sensors and other electronics are housed. The reason the flat tire exists is because if those sensors and electronics were pushed down that would increase the bezel around the screen – think Pebble Time Round – if it’s not too painful that is. And that is Motorola’s first argument for the flat tire, or the “Shelf” as they call it. The screen to body ratio on the Moto 360 is crazy high – over 70%. This is particularly attractive on the Moto 360. The bezel is super thin, which makes for an attractive timepiece. But what’s Casio’s excuse then? 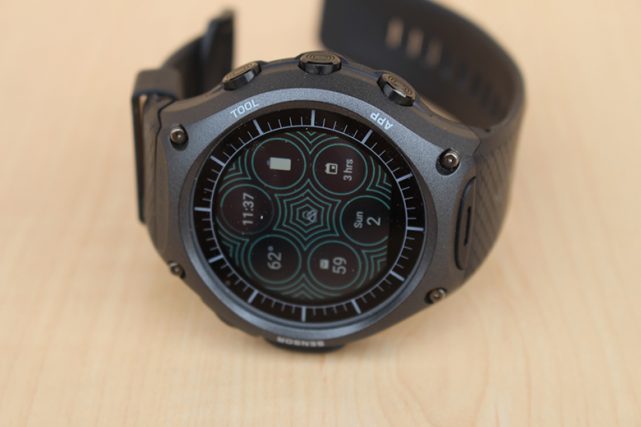 Motorola goes on to explain that those sensors are the reason for the flat tire.  Motorola also wanted to focus on making the watch customizable. Finally, Motorola cited customer preference, according to another article.  Of course that last one is entirely subjective – and frankly doubtful, but what do I know. The point is that Motorola set out to make a smartwatch with an extremely thin bezel, succeeded, and showed other OEMs that it was acceptable. And here we sit today, with a brand spanking new Casio watch with that same flat tire.

But I was hoping that by now, we would have set the flat tire aside. The flat tire is one of those eye-catching features that you have a hard time seeing past, and not in a good way. It mars the face of an otherwise attractive watch. Especially when you’re using a round watch face, and it dips below that flat tire. Nothing is more infuriating than only seeing the top of the number “6” at the bottom of a classy looking watch. It’s really irksome. 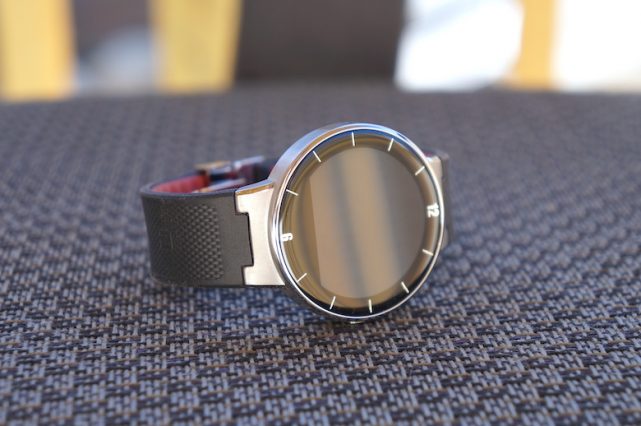 In the eye of the beholder

I get the desire to have a super thin bezel, I really do. It’s one of the things I liked about the watch and one of the things I hate about watches like the Pebble Time Round, may it rest in peace. But I’m convinced that this is why Apple has yet to release a round smartwatch. The bezel on those things can be fairly large. But when you look at a watch like the Samsung Gear S3, suddenly that bezel doesn’t seem too thick – though it is thicker than the Moto 360.

The bottom line here is that we really should move past this, but it keeps popping up, even in brand new devices. But maybe I’m wrong and customers don’t care about the shelf. What about you? Do you find the flat tire to be an eyesore on round smartwatches. Perhaps you like the super thin bezels the flat tire enables? Sound off below in the comments and let us know where you stand on this.