Read why we could be looking at a massive upswing in the popularity of smartphone stylus support.
Published 02 July 2013, 07:04 EDT

I absolutely adore stylus support for smartphones, tablets, laptops – pretty much any screen that you carry around. I’m ecstatic that Samsung’s experiment in reviving the tech with the Galaxy Note really paid off, and the once-lowly stylus is finally becoming a prominent feature again.

For fans of the stylus like me, we’re already in a much stronger place than we were just a few years ago, but there’s now the potential for things to get even better. One week ago, Sony announced its Xperia Z Ultra phablet, and if this handset ends up working as well as I expect it to, it could conceivably revolutionize the stylus landscape.

Back before Sony made the Xperia Z Ultra official, during those days when we still referred to the phablet by the codename Togari, an interesting rumor surfaced, suggesting that not only would the once-Togari-now-ZU support interactions with a stylus, but it would do so in pretty novel way – for current-generation smartphones, at least.

Old-school touchscreens, like for the majority of Windows Mobile’s run, used resistive technology. You can recognize these displays by the thin membrane just over the screen, which you physically depress to trigger an input. Since all these systems detect is physical contact, they work equally well with fingertips as with a stylus, or really any old thing you wanted to point with.

But resistive touchscreens are rife with issues, and the industry quickly jumped ship for capacitive systems once they became available: the age of multi-touch was born. Since capacitive touchscreens measure electrical charges, they don’t do much good with the sort of solid plastic stylus we’d use on resistive screens. The quick-and-dirty solution has been the production of the sort of ugly, broad-tipped stylus available now, which is able to trigger the capacitive sensors in today’s phones.

Samsung developed a much more elegant solution for the Note, but it came at a price: using a Wacom digitizer and pen – alongside a capacitive sensor for fingers – allowed for the use of a fine-tipped stylus, but now instead of a cheap plastic stylus, you’re out $40 if you lose or break your S Pen.

Suffice it to say, that Togari rumor had me excited. Would we finally see a phone that combined the flexibility of a resistive screen with the modern benefits of a capacitive sensor? Sure enough, when Sony announced the ZU it confirmed that impressive stylus support… though not without a few catches.

The Tech That Makes It Happen

When I first heard those rumors I pondered a little about how Sony might pull off this trick. An optical sensor sounded like one possibility, and some readers chimed-in to note that a theory that Sony could use an infrared-based optical system from Neonode was gaining traction. After all, Sony’s already used that tech for some of its e-readers. 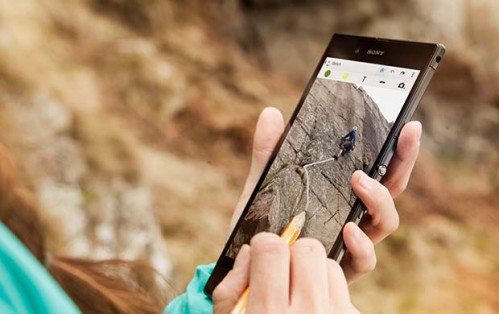 Sony didn’t go into much detail about how the ZU’s touch sensor works during its announcement, but did reveal that stylus support would extend to “any pencil and selected stylus or pen (capacitive stylus or metal pen with tip diameter over 1mm).”

That’s interesting for a number of reasons. While that tip size limit might make sense for an optical system, the fact that we’re even talking about material types strongly suggests that’s not what we’re dealing with. Sure enough, it quickly came out that Sony wasn’t using any Neonode optical tech, but just an improved capacitive sensor.

In a way, that makes even more sense. Manufacturers have been dialing-up the sensitivity of touch panels for a while now, giving us tricks like hover events and panels that work even when you’ve got gloves on. For the Xperia Z Ultra, the metal tip of a pen or the conductive graphite semimetal core of a pencil are enough to trigger an input.

While the fact that this system won’t function with every material under the sun is a significant setback, it still leaves us with a lot to work with; pencil stylus support alone is a huge deal, but the real trick is going to be delivering stylus-capable touchscreens to phones where stylus support isn’t a key selling point.

That is, I want to see every touch panel pulling this trick, regardless of whether the device is phablet-sized, or even comes from the manufacturer with its own stylus. Added costs should be minimal, especially when compared with a proprietary technology like Neonode’s, letting the feature go largely unused without consequence, should an owner prefer finger-based touch input.

But by merely making such stylus support available, we could be opening the floodgates when it comes to developers releasing stylus-optimized versions of apps. Buttons need no longer be so large, as we could tap away on the smallest on-screen elements while retaining accuracy.

At least, that’s the dream. Even if it’s slow to happen, I’ve got a good feeling that we’ll be seeing more and more devices like the Xperia Z Ultra arrive, all ready to change our perceptions about the role of the stylus in modern phones.

Samsung Galaxy Z Fold 2 5G will come in a Mystic Black and Mystic Bronze colors, and a Thom Browne edition is reportedly in the making as well.

It will sport a 144Hz refresh rate display