A glimmer of good news for the world’s most profitable smartphone brand in one of two major markets it’s still having trouble controlling. Just as it reportedly comes closer than ever to striking a deal with the Indian government for local iPhone production, Apple takes a commanding share of 62 percent in the so-called “premium” segment during Q4 2016, finishing the year in tenth place overall.

Of the record-setting 2.5 million units sold over the course of the full calendar year in India, no less than a third came in a “landmark” fourth quarter, when the iPhone 7 launch greatly boosted the iOS family’s appeal.

But 2.5 million sales are nothing compared to Samsung’s market-leading 25 percent slice of an ever-growing 300M+ pie. And while domestic vendors completely lost their mojo during the holiday season, more than 83 million of yearly shipped smartphones were “Made in India”, as well as 75 percent of the Q4 total. 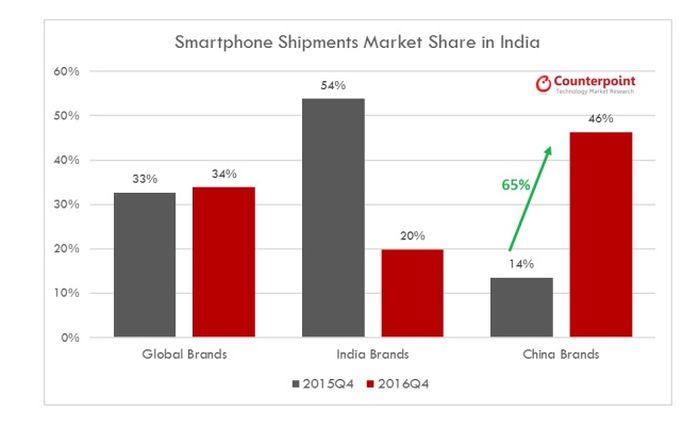 The sky would therefore be the limit for Cupertino’s regional progresses with enrollment in the aforementioned program, and possible resulting iPhone price drops. The sky, as well as a robust group of budget-focused Chinese brands, which raced to capture a combined 46 percent of year-end shipments, up a staggering 65 percent from a modest overall share of 14 percent during Q4 2015.

Vivo somewhat surprisingly led the glory-hungry pack, followed closely by Xiaomi, Lenovo and OPPO, with Lenovo (Motorola included) in third place for the year, behind Samsung and Micromax, and ahead of Intex and Reliance Jio, plus its own indigenous rivals.