The latest smartphone OS marketshare numbers are in from Kantar and they refer to the three-month period that in April 2013. Check out the numbers!
Published 04 June 2013, 02:39 EDT

The latest smartphone OS marketshare numbers are in from Kantar and they refer to the three-month period that ended in April 2013. Google’s Android is still leading the chart of OS percentage share of smartphone sales, with its 51.7%, up from 50.3% in the same period ending in April last year. However, it’s growth is much slower than the one at which iOS is trending, up from 39.1% last year to 41.4% this April. Last year the gap between the two was 11.2% and this April it is down to 10.3%; not a spectacular decrease, but a steady trend, at least in the US.

There is also good news for Windows Phone fans as the Microsoft-platform has finally passed the 5% threshold. It grew 1.8% in a year from 3.8% to 5.6% (though stationary at 5.6% compared to the previous period of 2013). The biggest marketshare loser appears to be BlackBerry who lost nearly all of its marketshare. Down at 0.7% from 5.3%, it is now competing with the leftovers of Symbian, currently ranking fifth with 0.6%.

Fore more details make sure to follow the source link where you can also find numbers concerning network operators.

Update: The situation is fairly similar worldwide. Android and iOS are on the top two spots and Windows Phone is in third (except for Spain). Check out the numbers below, per eight countries plus USA, and an average for EU5. Worldwide averages of USA, China, Australia, Japan, and EU5 look like this, based on Kantar’s numbers below: iOS 32.64%, Android 59.66%, Windows Phone 4.08%, below the 5% threshold. 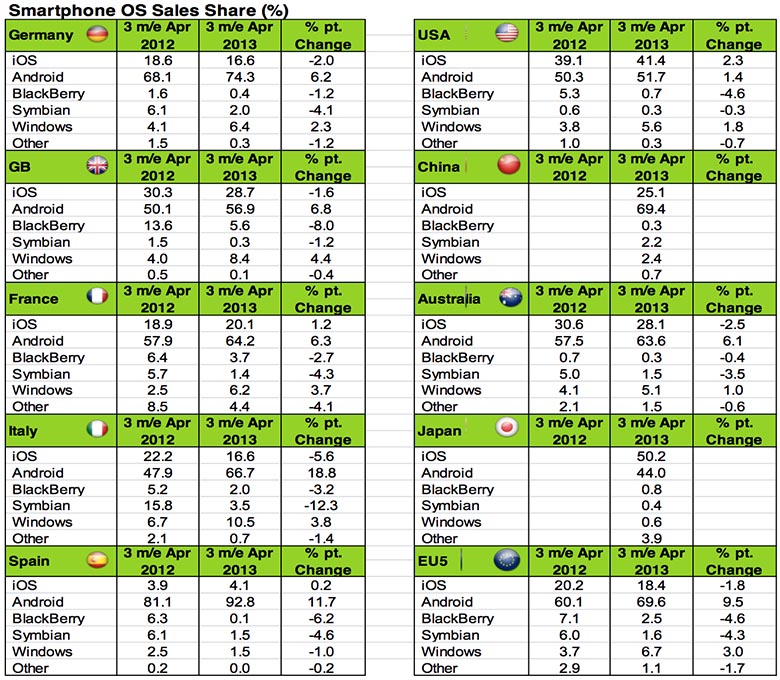 The variant benchmarked on Geekbench carries 8GB of RAM.