Stop calling it optical zoom when the optics don’t zoom

Optical Zoom is when the optics “zoom” or change positions in order to change the field of view and how the light entering the lens hits the image sensor
Published 16 January 2019, 06:00 EST

The whole multiple-camera zoom thing started with the iPhone 7 Plus back in 2016. Phil Schiller mistakenly calls it Optical Zoom even though it’s actually just switching between multiple cameras that have lenses with different focal lengths. Saying that switching between multiple cameras is “Optical Zoom” is completely incorrect and that should be obvious to anyone who knows what optical zoom means. Apple has once again spread their reality distortion field and is perpetuating incorrect information to sell products. 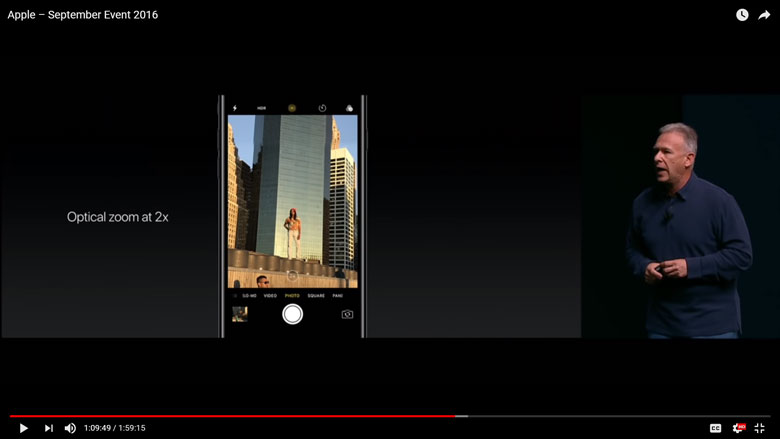 A couple years later, everyone has added multiple cameras to their smartphone offerings and many manufacturers are still saying that this is optical zoom when it’s much more complicated than that.  The iPhone 7 Plus’s multi-camera zoom is kind of like optical zoom in the sense that both cameras are the same so a photo from the telephoto camera/lens combination should have the same image quality as a photo from the wide angle camera/lens combination, and it’s only like optical zoom for those two focal lengths. Any type of zoom between those two focal lengths or higher than the 2x focal length is just digital zoom.  Apple calls it software zoom, but that’s the same as digital zoom.

That’s pretty complicated to understand already, but today things are much much less straight forward now that we have triple cameras with all sorts of different image qualities.

What is optical zoom?

Optical Zoom is when the optics “zoom” or change positions in order to change the field of view and how the light entering the lens hits the image sensor (or film in the old days). It’s a physical mechanical movement with no software involved. That’s not at all what happens with multi-camera zoom and the results are often not remotely similar either.

Humans use different words to describe different things so that we can communicate that they’re different.
It used to be that we had digital zoom and optical zoom. Everyone knew that “optical zoom” was better because it didn’t degrade the image quality (nearly as much). Now we also have multi-cam zoom which combines switching cameras with digital zoom… and CAN degrade the image quality in certain potentially-confusing circumstances. It’s not as black & white as digital vs. optical.

So now we’ve got 3 zoom types:

The 3rd type of zoom is Multi-Camera Zoom 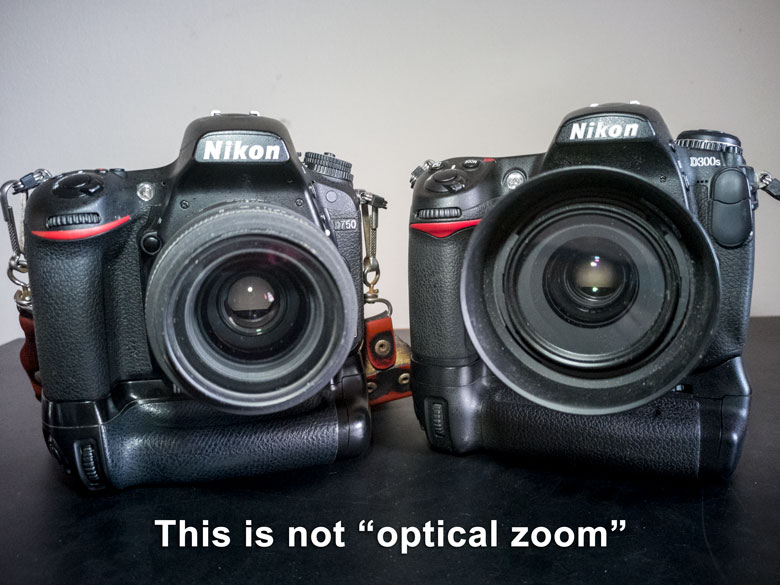 Many professional photographers often use “multi-camera zoom” by carrying two or more full-sized DSLR camera bodies with different lenses attached. That’s exactly what these phones are doing.  Photographers often go one step further and add different optical zoom lenses to each camera. It’s very common to have one camera body with a 24-70 mm optical zoom lens, and a second camera body with a 70-200 mm optical zoom lens attached.  That gives the photographer the ability to quickly switch between multiple cameras that have different focal length ranges.  Still, nobody would say it’s “10x Optical Zoom” when you have a 24-70mm lens on one camera and a 70-200mm lens on another. 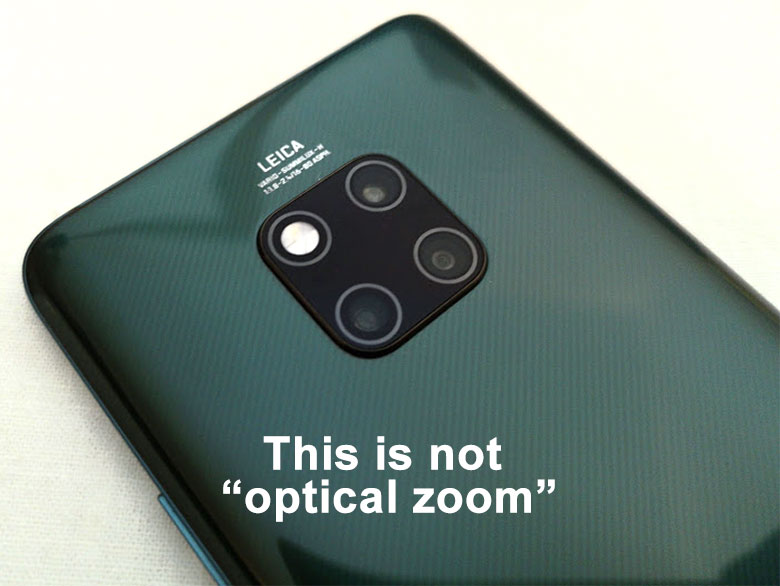 To be clear, the multi-cam zoom implementation on phones like the Mate 20 Pro, LG V40 ThinQ, and other multi-cam zooms phones, DO NOT achieve the same result as an optical zoom lens/camera combination.  It’s better than digital zoom, but it’s still not optical zoom. If these manufacturers are calling it “optical zoom”, then they’re probably trying to trick you just like how AT&T is trying to trick you into thinking your phone has 5G by changing the status bar icon.

Don’t fall for the marketing BS

By confusing “multi-cam zoom” with “optical zoom”, phone makers are implying that the optics are changing the field of view while maintaining a single image resolution/size/quality, when in fact they are not… the act of switching between multiple cameras is what’s changing the field of view (in combination with digital zooming to fill in the gaps) and the resolution/IQ is varying since you’re also switching between camera sensors. If all three cameras on the Mate 20 Pro had the same sensors then it would be CLOSER to the effect of optical zoom, but that’s not the case either. Like digital zoom, you’re losing image quality as soon as you move away from the primary 40Mp camera/lens combo.

You wouldn’t call an OLED display an LCD when there aren’t any liquid crystals in it, right? Then why would you say a camera has optical zoom when there’s clearly no physically moving/zooming optical hardware?  It’s like a chef confusing “grilled chicken” with “fried chicken”. Yeah, they’re both “cooked chicken”, but they’re very different processes with different results.

Some manufacturers have been describing their cameras as having “hybrid zoom”. That’s not descriptive enough though. Hybrid of what?  All point-and-shoot cameras for the past 20 years have had a combination of optical zoom where once the optical zoom reaches its limit, you can switch to digital zoom right away.  Is that “hybrid zoom”?  Yes, it is.  Using digital zoom in between the gaps of switching between multiple camera/lens combinations that have different focal lengths isn’t really hybrid zoom since there is no optical zoom happening… it’s just plain old digital zoom up until the switch over. Well, you can improve digital zoom with better up-sampling algorithms, but that’s still digital zoom.

Don’t get me wrong… multi-cam zoom is 1000 times better than optical zoom when it comes to miniaturization and durability! It’s much easier to get a fixed-focal length prime lens to have great image quality than it is to make an optical zoom lens with great image quality. Many professional photographers carry two cameras each with a fixed-focal length prime lens of different fields-of-view for that reason. The new multi-cam zoom features we’re seeing in new smartphones is a very smart innovation and I love it, but people should know that it is a totally different thing and has plenty of limitations/advantages that make it very different from optical zoom.

As compared to the 5G variant, the Galaxy A32 4G has a bigger display, a 64MP main camera instead of a 48MP one, a higher refresh rate, and more pixels on the selfie shooter.

The device will be powered by the Snapdragon 888 SoC.

We expect the highest-end variant, the Redmi Note 10 Pro Max to feature the high…