Remember when smartphones came with a ton of accessories?

Unboxing videos are shells of their former selves, because no OEMs bundle cool accessories anymore. Wax nostalgic with us with some smartphone memories.

Nobody likes a cheapskate. It’s why we have fun derogatory labels like “tightwad” and “skinflint” for those friends of ours who insist on dividing the bar bill by how many mozzarella sticks they actually consumed, rather than by the cost of the plate. Whatever other merits they might have, penny-pinchers just aren’t fun to have around.

That’s no less true in the case of huge multinational corporations than with people. But where a cheap social friend is pretty easy to jettison when he gets annoying, it’s a little harder to make up for the shortfalls of dealing with a cheap company. Specifically, a cheap mobile technology OEM. Because when you buy a new smartphone or tablet these days, some of those companies put an invisible bill right in the box – a placeholder for the tens or hundreds of dollars you’re going to need to spend on accessories to get the most out of your new device.

It wasn’t always this way. A big part of the joy of unboxing videos used to be in unwrapping the bundled accessories within. Pocketnow is kind of an old site, so we have a pretty intense archive of unboxings to draw from. Check out this one from 2008, brought to you in glorious 360p shakycam:

Now, as this was about four years before my arrival at Pocketnow, I admit that I have no idea what’s going on here. I don’t know who “Ms. Jenna” is, nor anything about the head-mounted camera rig she’s evidently making use of. The only two things I’m sure of after watching this are that jump cuts existed as far back as 2008, and this phone came with a metric s-ton of accessories. As called out in Jenna’s original post which accompanied the video:

Just look at that rundown: that’s a lot of added value in the box. Sure, a lot of it is pretty standard -you sort of need a battery to make your phone work- and some other accessories would maybe get used once every six months, but in this case the sheer quantity of bundled accessories serves its own purpose: it makes you feel like you’re getting a lot of bang for your buck. That’s important when the full retail price of the device in question is $549.

Contrast that with a more modern unboxing of a comparable device, that of Samsung’s Galaxy S 4 Active:

Just in case you’re sneaking this article at work, or you’re in the doctor’s office and forgot your headphones at home, or you just don’t want to watch my tired face unboxing yet another device, allow me to describe what the Galaxy S 4 Active comes with in the box. Are you ready? Here it comes.

No, there’s nothing missing from that single-item list. The Galaxy S 4 Active, one of the most advanced smartphones on the market today, which retails for even more than the Touch Diamond did upon release ($594.99 vs $549.99) includes nothing but a wall wart and USB cable in the box. Oh, and a health and safety guide, in case you forgot how to use a smartphone without blowing yourself up.

Now, the counterargument to all this snarky indignation is obvious: today’s smartphones don’t need as much included in the box, so it’s pointless to include a lot of the accessories that used to come standard. A stylus wouldn’t make much sense bundled with a capacitive device like the Galaxy S 4 Active (unless it was the laughable C Pen), and since the phone already bears a standard array of ports, it doesn’t need the headphone, charging, and syncing adapters that older devices did. And while CD-ROMs make sweet Frisbees these days, companies have better uses for their precious pennies. I get that.

But what about nicer, cheaper touches? Sure, you can nix the adapters and the setup disks (and, seriously, the “health & safety guide” can take a hike), but how about tossing in a microfiber shammy to polish up the display between greasy encounters with an ear and a cheek? Apple included one with the original iPhone but didn’t persist in the practice for long, and smaller players aped that devolution: the original Palm Pre came with a cloth, but many of its sequels didn’t.

The Pre is a good example of another gradual erosion of in-box extras, actually: remember the sweet orange-and-black pouch it came with?

That thing was pretty useless in practice, but along with the BlackBerry pouches of the time, it was a subspecies of a much more utilitarian accessory category for all you dorks out there: holsters.

Working at a carrier that catered to the blue collar crowd for a half-decade taught me a few things about holsters: they were ugly, they were cumbersome, and they were bloody useful, man. People loved their holsters, even when they were constantly falling apart due either to rough treatment or manufacturing defects. They’d just come back into the store and plop another $14.99 on the counter so they could walk out with a new one, because people who do real work don’t have time to fish around in their pockets for their phones, amirite?

And many OEMs -Motorola in particular- catered to that desire for carryability, by bundling holsters right in the box with many Nextel phones. Not all of them enjoyed this luxury, but the more expensive ones did. Today, that practice has all but ceased. Doesn’t it make sense to bring it back, though? To include more when customers pay more?

Things aren’t all bad. I mean, at least we still get chargers; HTC hasn’t (yet) followed through on its threat to omit them from smartphone boxes, so the world hasn’t turned completely on its head yet. And some OEMs who ship phones with horrible battery life still occasionally throw consumers a bone when they’re called out on it: Samsung offered deeply-discounted or free extra power packs for the A500 (2003), Blackjack (2008), and Galaxy Nexus LTE (2012). Others, like Nokia, occasionally toss fun stuff like charging plates or NFC tags into their boxes too, so there’s still some good in the world.

But it seems the days of a truly luxurious and feature-packed unboxing experience are behind us. It’s still exciting to pop the seals and lift the lid on a new device for the first time, sure -and peeling off the screen protector remains a favorite moment of mine- but without more fun stuff to mine from the packaging, many modern unboxing videos just aren’t as exciting. This is, I suspect, part of the reason some unboxings are being rebranded as “first looks” and “hardware tours” – because there’s just not enough in the packaging to keep us excited. While it’s not necessarily a surprise to see, in the world of narrowing margins and commoditization that the smartphone landscape has become, it’s still a shame. Because when you’re dropping hundreds of Benjamins on a device you’re going to funnel all your communications into for the next two years, taking it out of the box for the first time should feel like a special moment. And that’s not as likely when all you get alongside the phone is a charger, a warranty, and a flyer telling you how to buy more crap. 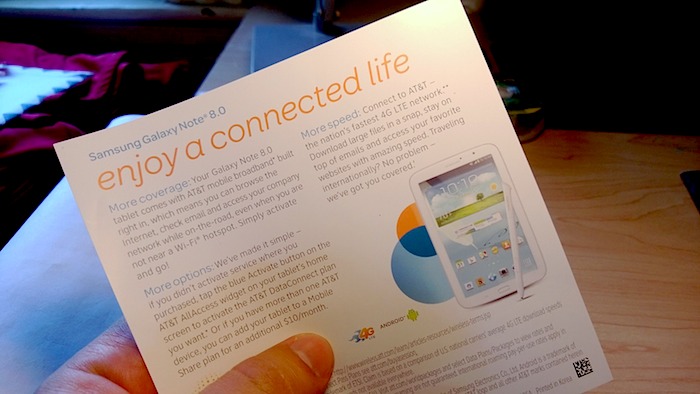 Want to read more about today’s smartphone accessory shortcomings? Check out Jaime Rivera’s piece on the nightmare of in-box add-ons, then join us in the forums to talk more about the old times, the days ahead, and the right-now in mobile technology. (Thanks for the heads-up, Grman Rodriguez!)