In recent years, our phones have evolved into the “universal remote control” – not for our televisions, but for our homes. That’s where the Pocketnow Smart Home series comes in! Thanks to a combination of sensors and Internet of Things innovations, taking your old-fashioned home and turning it into a smart home isn’t as difficult, or as expensive as you might think – and it’s all controllable from your phone, phablet, or tablet.

If you’ve been following our smart home series, we laid its foundation with the Almond+ smart router by Securifi; we added a smart lock by Sesame; and we walked you through how we added a handful of door/window sensors, a couple motion sensors, some flood sensors, smart plugs, and even a connected light bulb. Since then we’ve added even more connected light bulbs. Now we get to talk about where the real fun – and the real power – of a smart home comes in.

Automation is a relatively simple process to understand, but getting everything in place – laying the foundation – can take some time. Once that’s all done, after your hub is installed and you’ve paired your sensors and devices, it’s time to make them do “things” – smart things – which can be done by through rules and scenes. 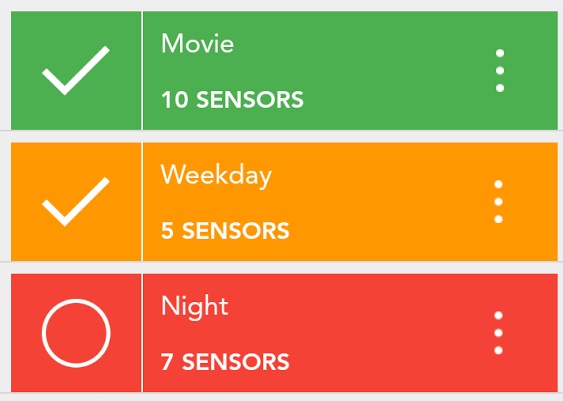 In an “old fashioned” house, you turn lights off and on by throwing a switch. Sometimes that switch is triggered by a hard-wired motion sensor or photocell, but most of the time it’s just a switch on the wall. Smart homes can be different.

I have three lights on the exterior of my garage, one on a back porch, another in an outside stairwell, and one on the front porch. I want to turn all those lights on when it gets dark, then turn them all off around 10pm. In a “normal” house I’d have to walk around the house, into the garage, and downstairs, flipping several on switches on when it gets dark, then repeating the process to turn them off before bed. Setting up a scene let’s me group all these lights together, and with one tap I can turn all the lights on, or all the lights off.

Another scene might dim the lights in the livingroom when you’re sitting down to watch a movie. Another might turn all the lights off in the house, lock the doors, and lower the temperature – again, all with a single tap. Scenes really are powerful, and they’re easy to set up.

Rules are kind of like scenes, but they’re triggered automatically based on some condition – or set of conditions – being met.

A perfect example of this covers a situation that happened to me earlier this week. I was called home to water in the basement. Melting snow and rain made their way through a vent into our storage room. A flood sensor placed at the base of that vent would have alerted us to the problem almost immediately. Instead, the problem existed for two days before we noticed it. At that point we had to hurry and clean out waterlogged moving boxes, vacuum out water, and take corrective measures to ensure that water would be properly diverted away from the house.

Until we were certain the source of the problem was resolved, we put the hose of our shop vac down in the hole in front of the vent so it could be quickly switched on. We ran out of time that day, but if the problem continued, I formulated a plan. I’d install the flood sensor in the hole, plug the shop vac into a Peanut Plug, and configure a rule to turn the shop vac on any time the flood sensor detected water.  Luckily, it looks like the problem is fixed. 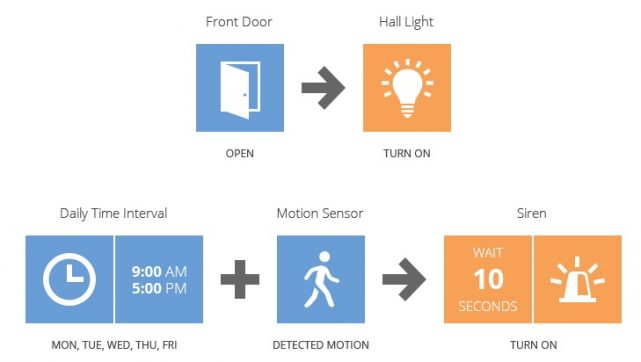 I’ve got another rule that turns on my exterior lights in the evening, and off again when I go to bed. Another rule could turn on a space heater when a temperature sensor detected freezing temperatures. Another could turn on an exhaust fan when high-humidity was reported by a humidity sensor. Porch lights could be turned on for five minutes after the front door is opened, or when motion is detected on the walkway. Pretty cool, right?

Configuring rules might sound overwhelming, but they’re basically just if-this-then-that events – very similar to the IFTT service that we’ve talked about in the past. Unlike IFTT which is based on single condition triggers, Almond+ can use multi-factor triggers, such as the one one above: If it’s between 9am and 5pm on a weekday and motion is detected, then wait ten seconds and sound the siren. Alternatively, rules can be simple: if the front door is opened, turn on the hall light.

“With Almond smart routers, it’s simple for users to integrate and control all of their favorite connected devices from one central Smart Home hub. The idea is to reduce multiple control points in a smart home and provide a hassle free experience to the consumer. Rules and Scenes further provide users the flexibility to create sophisticated automation rules. Rules are stored on the hub as well as in the cloud, making Almond the only home automation hub that gives the option to control over the Internet or purely through home LAN.” – Rammohan Malasani, CEO, Securifi

With smart routers (such as those from Securifi), a few simple sensors and devices can easily be setup to work together to help automate your digital lifestyle!