My new house is going to be intelligent, and controllable from my smartphone

We have smart phones, smart cars, and now the smart home is finally becoming a reality for the average homeowner.

We have smart phones. We have smart cars. Some of us even have smart homes – but the smart homes of yesterday usually have to be professionally wired and programmed. Thanks to modern technology, the capabilities of smart homes are changing, and the interoperability of devices with each other, and controllability from our smartphones and tablets is finally within reach of the average person.

Unfortunately, all these different components that go into a smart home are fairly disconnected from each other. We rely on services like IF (formerly IFTTT) and apps like Tasker to build recipes and connect all the separate components. Sometimes, with the right configuration, this orchestration can be beautifully executed, but more often than not, users are left with disconnected appliances, each controlled by their own app – and most of them are woefully unaware of each other.

If you don’t already know, I’m in the process of having a home built and will be moving before the end of the year. Some of the objectives of the house are to be very energy efficient, and (fairly) automated. I’d like the blinds to lower after sundown, and raise around dawn. I’d like the windows to open at night and close again before the temperature gets too warm (and the A/C shouldn’t turn on while the windows are open, and the windows should automatically close when it’s storming).

You get the idea.

To achieve a “smart home” you’ve got to have devices that can report status and/or take action.  These days you’ll probably equate devices like this to the Nest Learning Thermostat and Nest Protect devices. Both of those were designed by ex-Apple employees and the company was recently acquired by Google. These devices monitor your home’s temperature, humidity, whether there’s smoke in the air, and even they even have occupancy sensors to determine whether or not you’re home. Additionally, the thermostat does what you’d expect it to (control your HVAC system), but since it’s connected to the Internet it knows when it’s going to be hot, cold, humid, or dry outside your home, and adjusts its schedule accordingly. What’s more, these two devices talk to each other to help determine whether anyone is actually in the house, and the Nest Protect will even tell the thermostat to stop the fan if there’s smoke in the air. Smart. 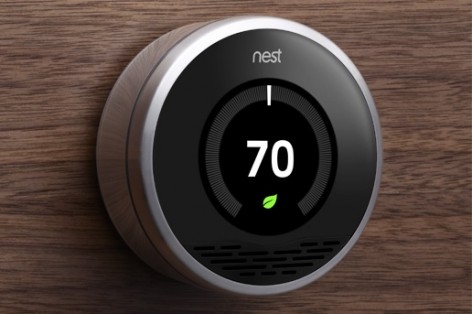 More traditional sensors include (but are in no means limited to) door sensors, motion sensors, glass-break sensors, and water sensors. These have generally been associated with a home security systems in the past. In fact, many home automation systems got their start from security systems.

When you connect an Internet connected doorbell/intercom with a camera and smart lock, all of a sudden you can “answer” your door from anywhere, giving the impression that you’re home, even when you’re half a world away. Nest even works with some brands of light bulbs to turn on when nobody is home to give the impression of occupancy, just for added safety.

Other devices include such things as a propane tank scale (to tell you how much fuel you’ve got left and remind you to pick up another tank before your next barbeque), a connected egg tray (to tell you when you’re running low on eggs, and even when they’re getting old), and even an app-enabled piggy bank to tell you how many coins you’ve got stashed away.

Washers, dryers, dishwashers, garage door openers, automatic sprinklers, powered window openers and window shades, light bulbs and strips, switches, outlets, and more devices are all joining the fray. It’s getting everything in one place that’s easy to configure and control that’s the trick.

Getting things to talk to each other and respond accordingly is a whole ‘nuther ball of wax.

Part of the issue is the lack of a solid standard – or too many competing standards, depending on your perspective.

The Nest thermostat and Protect talk with each other, but they do so using a proprietary protocol that others can’t directly hook into. What if a person has another brand of smart thermostat? Shouldn’t those people be able to benefit from the intercommunication that turns the fans off when smoke is detected? 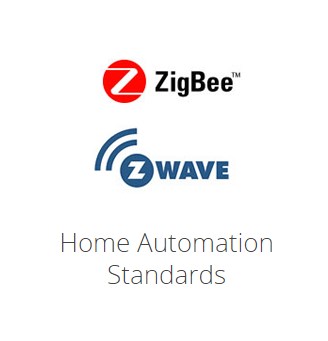 Carry that example one step further: upon detecting smoke, if the house is occupied, all the lights on the path to the exits could be turned on, the sprinklers in the yard could be turned on, and the doors could be automatically unlocked, potentially saving lives. That can’t work without devices that talk to each other.

As things sit today, some devices communicate over Bluetooth, WiFi, or some other standard such as Zigbee, X10, Zwave, or even proprietary protocols from Lutron and Kidde.

Apple’s HomeKit and Google’s Android @Home Project Brillo/Weave and “Works with Nest” are attempts by the major players to jump into the home automation game – not by making all the products themselves, rather, by building the platform upon which an ecosystem of products can be built.

Samsung is trying the same thing with SmartThings, and other players are trying to bridge the gaps by building
“hubs” that support multiple devices types and protocols. 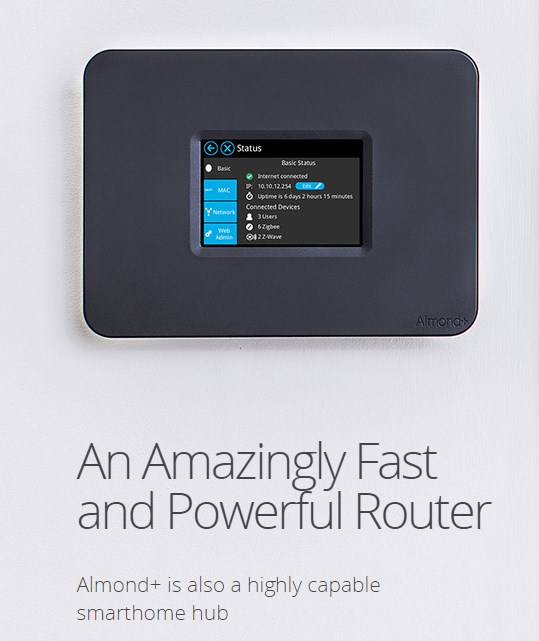 That might seem like it’s trying to do too many things at once, but with innovative touch-screen controls, an Android app, all crammed into a single package, the Almond+ was a great buy at only $US99 – despite having to wait from February 2013 to August 2014 for the device to arrive. These days the same device will cost you $249.

I haven’t used it yet, since the house is still being built, but that’s “Plan A”.

My builder recommends Wink. It’s been around for a while and is gaining a lot of traction. It, too, supports various communication standards, and it’s got an app as well.

Unlike the Almond+, Wink itself doesn’t have a screen (which isn’t necessarily a bad thing) – it’s configured via the app interface (something you can do with Almond’s app as well). The Wink Relay does have a screen, but it’s $300 and is really meant to be more of an extender than the base hub.

The Wink hub doesn’t do as much as Securifi’s Almond+, but it’s priced at $50. That’s not terribly important to me because I already have the Almond+, but to someone just getting into the smart home”game”, that’s a $200 gap!

There are a few other hubs out there. VeraLite, SmartThings, and Iris being forefront among them – each with its own pros and cons.

Do you have a smart home? What automation hub did you select, and why? Does it meet your needs? What are some of your complaints with it? Head down to the comments and help me (and everyone else who’s considering making their regular home just a little smarter) make the right choice!

Also, what sensors/devices from which manufacturers are your favorites, and why? I’m going to need a bunch of ’em, so let me know what you like and what you don’t like! I’ll see you down in the comments!