Do you use Skype for modern Windows on a tablet or PC? There’s a lot of nice features that will be going away soon if they haven’t already.
Published 15 July 2015, 01:40 EDT

As you may already know, the Skype team at Microsoft somehow decided to discontinue the “modern” full-screen touch-friendly version of Skype for Windows 8 before any reasonable replacement was available. I received an email on June 16th, 2015 that said, “From 7 July, 2015 you’ll no longer be able to sign into the Skype for modern Windows app.” After July 7th, the modern app was supposed to forward you to a website where you can download the x86 desktop version of Skype. The big advantage here would be that Skype no longer would have to keep developing two versions of the app for the same Windows platform. The desktop version has always had more features, although many (such as Facebook chat and Facebook newsfeed integration) are also being removed. However, there are some major advantages to the “modern” Windows 8 version of Skype that we thought we would be losing on July 7th (Unless you have Windows RT in which case you get to keep them.)

With the modern version of Skype, you could instantly see any notifications you might have missed right on the Windows lock screen. Skype’s x86 desktop app isn’t that capable.

The Skype Modern app for Windows 8.x asks you if you want to allow it to run in the background when you launch it for the first time. If you enable that, a low-memory resident process will stay running and allow you to receive messages and incoming calls without having the whole program running. The background process takes about 0.1Mb of RAM. The desktop version of Skype can be set to launch when you boot up, but in my version, that will constantly use up about 150Mb of RAM. On a small tablet with only 1Gb of RAM, that’s a huge amount of memory that could be used for other tasks. Even when fully loaded, the Skype for modern Windows app still takes up a lot less RAM.

Right from the start screen you could see snippets of messages you might have received on Skype while you weren’t looking. The Skype for Desktop Windows program does not have a live tile for such convenience.

Skype wants you to think that the desktop version of Skype is going to be touch friendly on a Windows Tablet. It isn’t. Not even close. 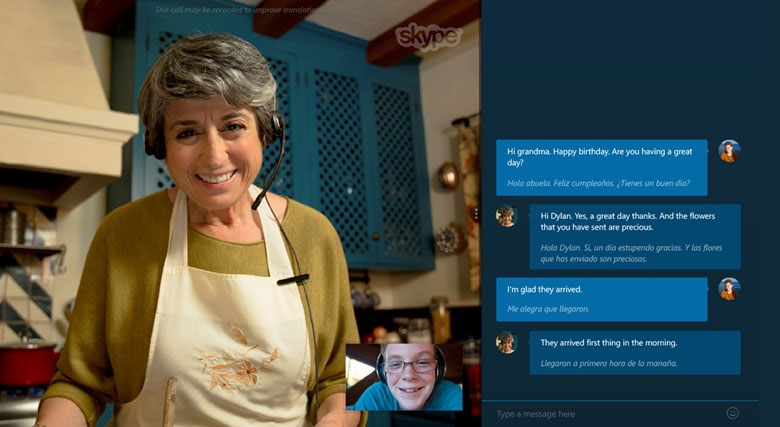 If Skype on your Windows tablet is still working, count yourself lucky! Be sure to voice your concerns over losing these features at the Skype Community Forums, Windows Uservoice, and/or Skype Customer Service. In the meantime, you can also download the Skype Translator Preview which has most of the same features of Skype for Modern Windows.

Granted, the Skype for Modern Windows app had a lot of other issues. You can’t see if someone’s status is set to Away, sending pictures usually doesn’t work, you can’t screen share, and you’re not likely to get your friends’ profile pictures to load, but still some of the features listed above are pretty nice to have! Now, come Windows 10, there is talk that Skype will be integrated with the Messaging, Video, and Calling apps. Those should all be of the “Universal”/”Modern” style which would support live tiles, low memory, and connected standby. However, those apps won’t even be available at the launch of Windows 10… AND of course Windows 10 won’t be launched until the end of this month; long after Skype was intending to shut it down. Hopefully Skype will do the smart thing and wait until there’s a suitable replacement for their Modern Windows app before pulling the plug.

TSMC has finally and officially announced its plans to build a new factory in Arizona, which could create around 1,600 new jobs

The upcoming iPads will be fitted with fast chips but Apple might cut a few corners to keep the price in check, following a strategy similar to iPhone SE.