Is Cortana catching up to the competition, or does the competition now need to catch up to Cortana? It’s an interesting fight. Find out here.
Published 17 April 2014, 07:00 EDT

The big news dropped at Build two weeks ago. Cortana is coming to Windows Phone. This personal digital assistant (see what I did there) would bring a top-notch voice control system to Windows Phone to compete with other platforms (read: Siri and Google Now). Is it possible we see Cortana catching up to, or even surpassing it’s rivals? As of Monday we were allowed to start talking about it. And oh boy have we started talking about it.

As a matter of fact, nearly every editor at Pocketnow has written an editorial about Cortana and more generically Windows Phone 8.1. Some have loved it, some have been rather passive aggressive about it, and others have seen both sides. This just goes to show you how polarizing this topic is and how needed it was for Windows Phone. Siri started the revolution; Google Now built upon it, and now along comes the hologram of the future.

Some have criticized the Windows Phone update calling it (and rightly so) “catching up” (cough-cough-Jaime-cough) to the other heavy hitters. They’re absolutely correct. Windows Phone 8.1 brings the platform right up to stand toe to toe with iOS and Android in terms of environment. There’s nothing wrong with that. The platform was behind in many ways but it not any longer. Do I criticize Microsoft for that? Absolutely not. It had to catch up before it could surpass because frankly there was a lot to catch up on.

But now, it’s gotten me thinking – Now that Cortana has sat down at the table with Siri and Google Now, just who is at the head of the table? Putting aside platform usability, app gaps, etc, just looking at the assistants themselves, who’s catching up to whom now?

A couple of things need to be said here. First of all, Cortana is still in beta. It’s very in beta. I tried the “Facebook – what’s up with….” command that Joe Belfiore demonstrated on stage and got search results instead of the Facebook app. This is why we don’t believe demos, people. But anyway. We’re going to move past that because it’s a Beta. But the idea of Cortana is a great one. If Microsoft drops the ball on that idea, well, that’ll be another editorial. And not a pretty one. But for now, as I said yesterday, Cortana needs to stand on how she is now, not how she might be in “the coming weeks” (it still hurts to write that).

I’m not impressed with digital assistants who can tell me ‘where to hide a body’ or ‘what does the fox say?’ Those are cute and plucky fun-to-show-off-at-parties features, but they’re really not going to help you get a heck of a lot done. In my mind, getting things done is where Cortana shines and it’s really for two main reasons.

It’s all about the apps

Third party app integration is essential to a phone. When you’re using a smart phone, you’re not just using the operating system. You’re using the apps. The same argument that makes Windows Phone supposedly “inferior” to Android and iOS (lack of apps) make Cortana head and shoulders above Google Now and Siri (lack of app integration). Siri and Google Now both do a good job interfacing with the apps that Apple and Google have made, but when it comes to third party apps, they pretty much fall on their faces.

Siri can update Facebook and Twitter and search in Wikipedia, but that’s Apple adding those functions, not Facebook, Twitter, and Wikipedia. Maybe you’re thinking, “Who cares? As long as they’re there!” Maybe you’re also thinking it with the proper usage of “they’re” and “there” and if you are, I salute you. But the distinction is huge. By that model, Apple gets to decide what works and what doesn’t. Google Now does the same. But Cortana goes the extra step and allows developers to decide for themselves whether or not they want Cortana integration.

The second reason is the digital notebook that allows you to really let Cortana know who is who and what is what. One thing that sometimes frustrates me about Google Now is the complete irrelevance of some of the cards it decides to show me. Don’t get me wrong, I think the fact that it’s showing me cards by itself is awesome, but how many times to I have to dismiss the nearby places to eat card until enough is enough? I’ll find Dunkin Donuts on my own, thank you very much.

Just how powerful that notebook is remains to be seen by my own eyes, I understand. I’ve had Cortana on my phone for approximately 3 hours as of this writing. It’s very possible that the digital notebook is just as silly as Google Now when it comes to “anticipating my needs”. Time will indeed tell. But the fact that it allows you the granular control over your needs and interests is a pretty cool concept over all. 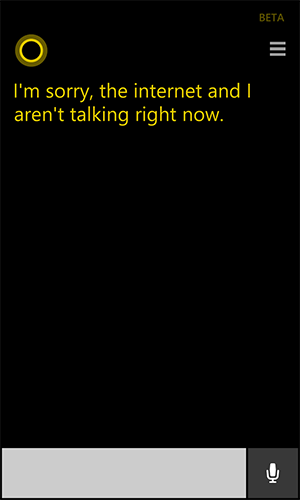 There are some ways in which Cortana does not shine. One notable example in this with the lady is her ability to learn who my family is. I had to teach her who my wife was by saying “Text my wife”, then Cortana asked, “Who is your wife.” Well, naturally – she didn’t know who my wife was. But Facebook does, and Cortana is connected to Facebook. Plus, I had to teach her who my Dad and my Mom were. Well, if he’s my dad, and Facebook says they’re married…on second thought, it is a brave new world and there’s no guarantee that my dad’s wife is my mom. Overall though, we addressed the “smartness” of Cortana yesterday, so we won’t dwell.

Siri is wonderful for her ability to read aloud just about anything – texts, emails, tweets, etc. whereas as Adam Lein reported Cortana tends to default to “show” much more often than “tell”. But at the same time, this is a Beta, so it’s important to keep that in mind. Sure all three services will undoubtedly be updating and expanding in the months and years ahead, so it may turn into quite the foot race. For today, while Google Now remains in the lead in terms of overall function that is brought to the table right now. But, the idea of Cortana is the yardstick by which I will be measuring others. It will be up to all three assistants, including Cortana to catch up to those standards.

Tentatively called Samsung Galaxy Z Flip 3, the device will be cheaper, but it will only arrive after the first quarter of 2021.

The Moto E7 is powered by the MediaTek Helio G25 processor and comes equipped with a 4,000mAh battery that supports 10W charging.

Once the transaction concludes in 2022, Slack will integrate into Salesforce Cloud and…

Today's deals come from Samsung, B&H, and Amazon, where we find the Samsung Galaxy Note…

Wyze Watch's frame is made out of aluminum alloy, which is a pleasant surprise since…