What Sharp’s new smartwatch screen could mean for battery life

The smartwatch market is already full of some healthy competition, and with new devices like the Apple Watch over the horizon, that’s only going to get fiercer. Right now, the various players are competing in terms of software features, hardware style, and price, but for all the success they can find in those fields, there’s one issue that nearly everyone continues to struggle with: battery life. Companies have attempted to mitigate the issue with the largest batteries they can manage to squeeze into their wearables, as well as giving their hardware convenient wireless charging capabilities, but even that only goes so far: we still need to cut down on power consumption. Smartwatch screens can be some of the biggest power hogs these products face, but Sharp has a new component it thinks might be able to help out in that regard, with its incredibly low-power new LCD.

The one-inch display is pretty limited compared to conventional LCD panels. For one, there’s no backlight, relying on reflection alone. While that spells problems for low-light situations (unless a manufacturer pairs the screen with a frontlight) it does promise incredible readability in direct sunlight. It’s also much less colorful than full-featured LCDs, only displaying eight shades.

In addition to that reflective construction, the screen also saves power by employing some integrated semiconductor storage, saving on power needed to update the image being displayed. All told, Sharp says that its system draws something like 1/1000th the electricity of a standard LCD. Those trade-offs are still very real, but if the power savings turn out to be really that substantial, it may be worth it.

As of now, Sharp has yet to announce any wearable manufacturers that may be using its new screen in future smartwatches. 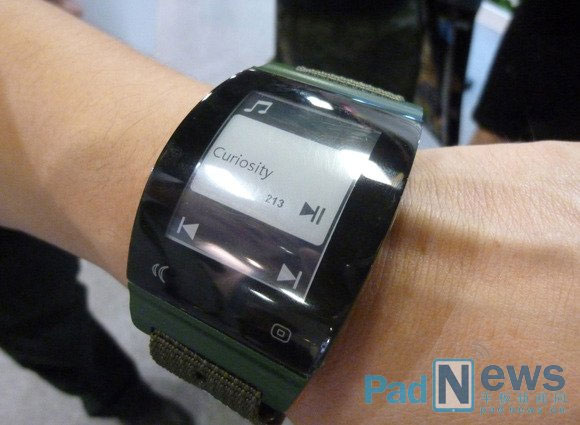