There aren’t many mid-range “full screen” smartphones around right now, but while Sharp appeared to hype up the China-first Aquos S2 like a true flagship, it turns out the slim-bezeled 5.5-incher packs a Snapdragon 630 processor in its “standard” edition.

Needless to point out that’s probably still a way faster silicon than the SD435 inside the LG Q6, with a limited “Collector’s Edition” Sharp Aquos S2 further upping the power ante to the Snapdragon 660 also found under the OPPO R11’s hood.

But let’s circle back to undoubtedly the main selling point here, namely “Free Form Display” technology. This facilitates the digging of small holes “precisely in the screen for the front camera and receiver”, which ends up looking awfully similar to how Andy Rubin’s Essential Phone minimized its own top border. 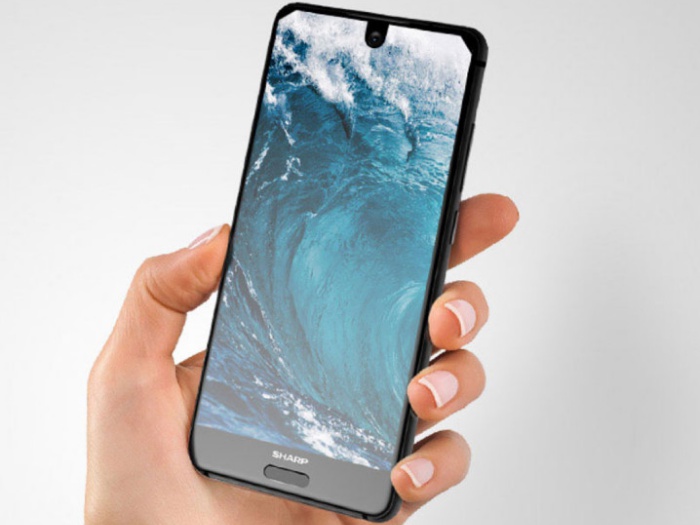 It’s not radically different from Apple’s oft-leaked iPhone 8 design approach either, though the “chin” on this Aquos S2 is large enough to accommodate a physical fingerprint scanner and Sharp logo. The world’s narrowest fingerprint reader, for the record, but still, you have to wonder if Foxconn’s subsidiary is truly committed to the 100 percent bezel-less screen smartphone goal.

Of course, the Aquos S2 has a few other things going for it in addition to an advertised screen-to-body ratio of roughly 85 percent. Specifically, Full HD+ display resolution (2040 x 1080 pixels), up to 6GB RAM and 128GB internal storage, microSD support, plus the obligatory dual rear-facing camera setup. With Dual Pixel technology, 1.4 micron size and 12 megapixels, the primary lens sounds identical to the Galaxy S8’s single back shooter, while a secondary 8MP sensor enables various neat background blur tricks.

Lastly, you get an 8MP front-facing cam, premium glass and metal construction, Android 7.1.1 Nougat software (with something called Smile UX on top), a 3020mAh battery, slim 7.9mm profile and USB Type-C connectivity. All for the sensible price of CNY 2,499 ($372) in a Snapdragon 630/4GB RAM/64GB ROM configuration, or a much heftier 3,500 Yuan ($522) with extra power, memory and storage. No words on international availability.