A smattering of shady Galaxy S8 specs from Weibo, including a 30-megapixel camera

At least one techie Weibo account has dropped a fairly in-depth specifications list of what we should expect from the Galaxy S8 that should be coming relatively soon.

By the way, it’s just a screenshot of a two-column list that looks formatted perhaps for a blog. Even KJuma, a well-known entity around these social parts, is asking a couple of other techie Weibo members if they think the list is a bluff — though she hasn’t gotten an answer back. You’re free to believe or disbelieve all this as you wish, though. 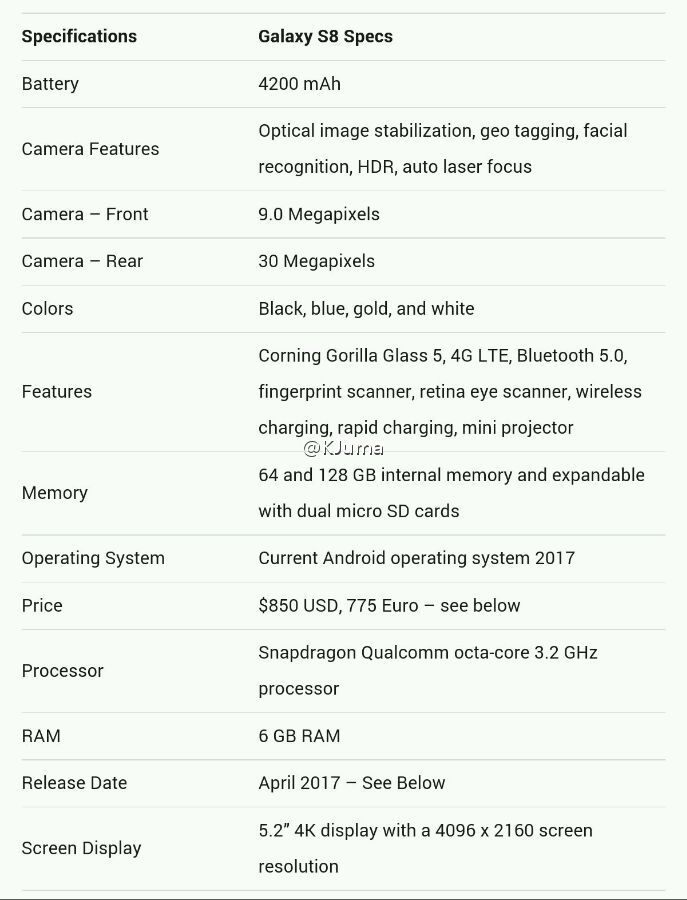 The big digits you’ll see are a 30-megapixel rear camera paired with a 9-megapixel selfie shooter. It’s powered by an yet-to-be-realized “Snapdragon Qualcomm octa-core 3.2GHz” chipset. If you have doubts about the image processing systems on Snapdragon chips, even though the 820 only has support for up to 25-megapixel pictures, the 810 could support up to 55-megapixel shots. If we’re talking about Exynos chipsets, the rumored 8895 inside select Galaxy S8 phones would also have to support 30-megapixel output. The Exynos 8890 in this year’s flagships only supports a 24-megapixel maximum.

Other bits worth mentioning include Gorilla Glass 5, Bluetooth 5, a retina scanner (carried over from the Note 7), Samsung’s first flagship implementation of 6GB RAM and storage options of 64GB and 128GB with dual-microSD support. Oh yeah, and there’s that 5.2-inch 4K display. Previous rumors have pointed to a model around that size and then another larger one, both possibly with “edge” screens.

Now, the skeptical side of us truly believes that we’ve reached La-La Land at this point, but there’s one grounding connection to make. That’s with the expected price of $850 or €775. Holy moly, is that asking quite a bit for a Galaxy S phone these days. That said, if we expect Samsung getting a bit desperate to throw things at the S8 to see if they stick where the Galaxy Note 7 never had a chance to stick because of a nasty little recall episode, then it’d be fair to expect a play in shared price territory.

Thing is, if what we’re hearing about Samsung’s desire to expedite the release of the Galaxy S8 in wake of said recall, the rumored release date just doesn’t jive — it’s in April. Samsung introduced the Galaxy S7 in late February and pre-orders were already being fulfilled in the US before March got started while a global rollout was officially marked on March 11.

There you have it — our dreams and our doubts about the S8, at least over a little slip of digital paper. We’re willing to torch it if you are, though.

Putting those M1 Pro and M1 Max chipsets to their maximum potential.