Sell Your Used iPhone for the Most Money on Swappa

On top of that, Apple usually discounts the older models once the new iPhones are official. This means that if the price of a brand new 2017 iPhone officially drops $100, the price of a 2017 used iPhone will drop even more. If you’re looking to sell, or to upgrade, don’t waste too much time! You’ll lose money.

Which begs the question: how much money can you get for your used iPhone?

Our friends over at Swappa have compared their prices against services like Gazelle and Decluttr. While it largely depends on the phone being sold (model, storage), in general, Swappa prices are 85% higher than Gazelle, and 52% higher than Decluttr. Swappa is the best place to sell your gently used mobile devices because you’ll get more than Gazelle or other similar site. Not only is Swappa great place to sell, but it’s a great place to buy, especially now that the new Galaxy Note has been announced and new iPhones are on the way out. For example, now is the best time to buy the iPhone 7 and iPhone 8, and also the Note 8. These phones are from last year, but they still have great specifications that can run even the most demanding apps and games.

To give you an idea, look below to see how Swappa prices compare against Gazelle and Decluttr for the iPhone X and iPhone 8. They’ve got plenty of price comparisons for the rest of the iPhone models out there, so make sure to check Swappa out to see how much your used iPhone is worth.

How much is a used iPhone X worth?

How much is a used iPhone 8 worth?

Additionally, check out the chart below to visualize the differences in prices across all models, compared to the two services. 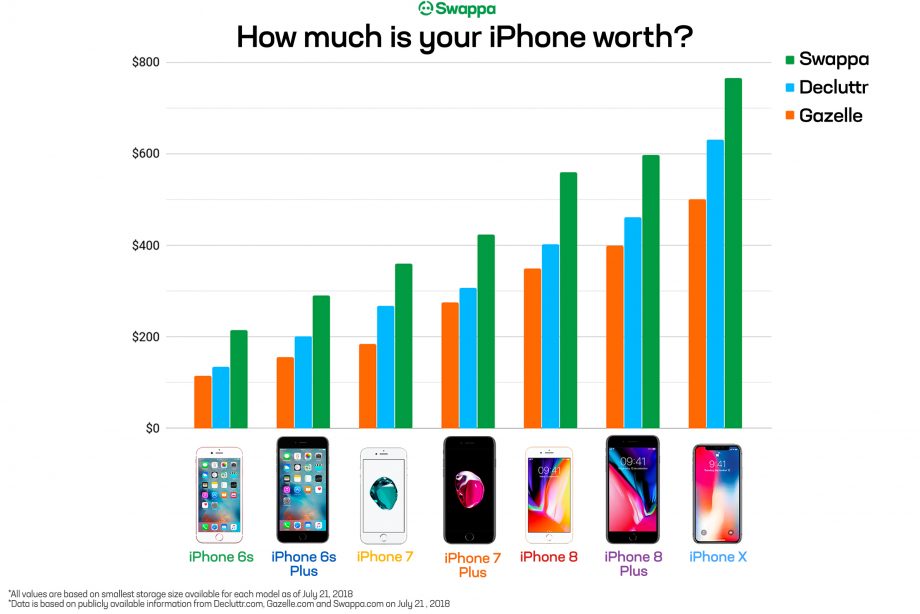 In addition to the charger, the Samsung Galaxy S21 series’ retail package will also miss out on the bundled headphone.