Want to wirelessly connect your Windows 10 Mobile to a bigger display and keyboard/mouse easily and inexpensively, well that’s what the ScreenBeam Mini2 Continuum Edition is made for.
Published 03 January 2017, 07:12 EST

The big unique feature for Windows 10 Mobile is “Continuum”. Actually that may be its only unique feature these days as most of Windows Phone’s other innovative and unique features were removed from the platform with Windows 10. Anyway, Continuum is the phone’s ability to connect to a larger display either wirelessly or wired and run a full screen higher-resolution Windows 10 style secondary interface that takes much better advantage of the secondary display as opposed to just mirroring the phone’s display. Combine this with Microsoft’s Universal Windows Platform designed apps and you’ve got phone apps that suddenly behave exactly like their upscaled counterparts would on a larger screen. The mail app grows a reading pane. The calendar show much more data, etc. 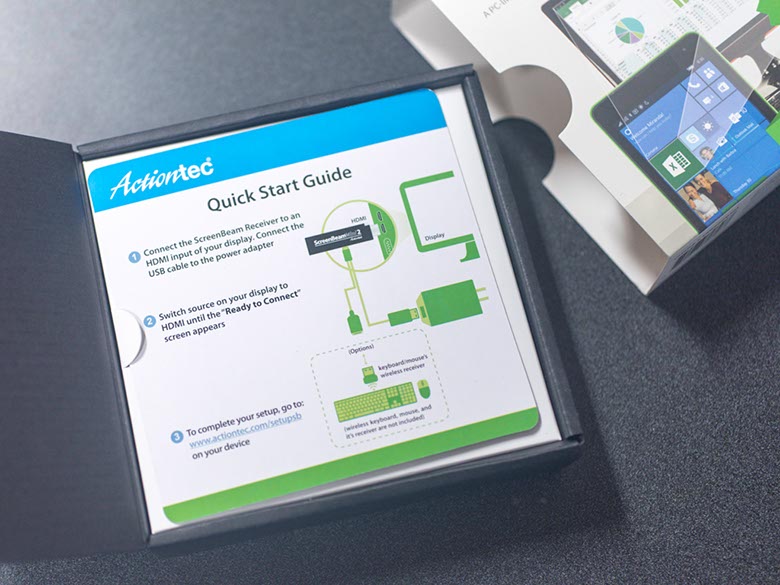 The Quick Start Guide gives away all the details. Basically, you plug the Miracast stick into an HDMI port on a TV or monitor. Then you plug the USB wire into an AC outlet or powered USB port.  Then, there’s the special USB input port on the wire where you can plug in any USB keyboard and/or mouse. That includes wireless receiver dongles for wireless keyboards and mice. 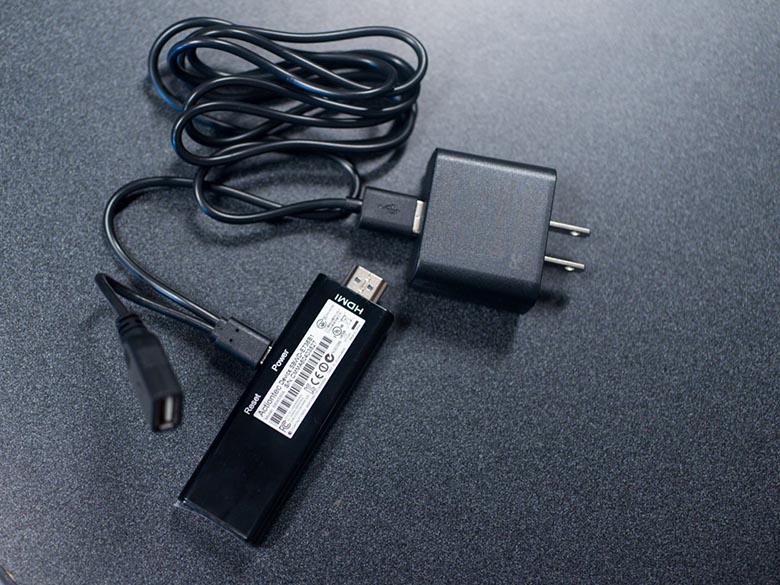 The whole package is very portable and very easy to install on any HDMI compatible TV screen, monitor, or projector you might come across. 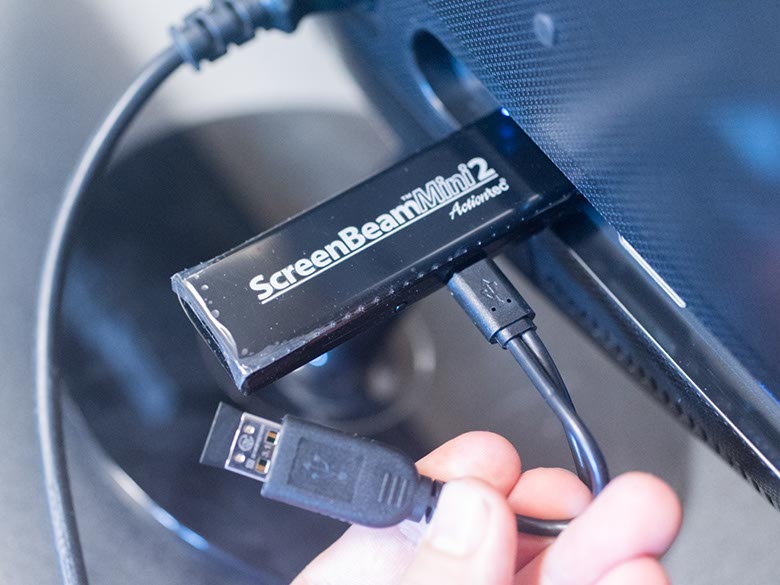 In the above, you see a wireless dongle for a mouse plugged into the ScreenBeam Mini2 hardware. 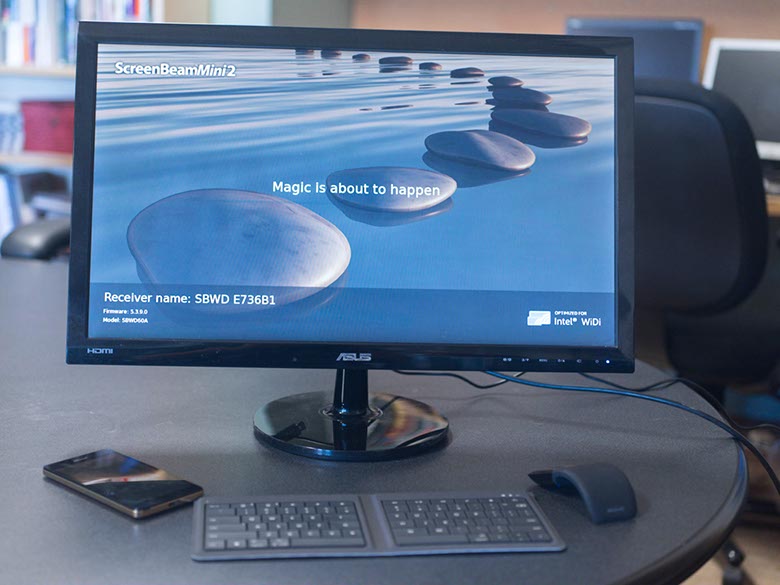 After plugging it in, switch to the proper HDMI port input and you’ll see a screen like the above with all the info about the ScreenBeam Mini2 wireless display adapter. 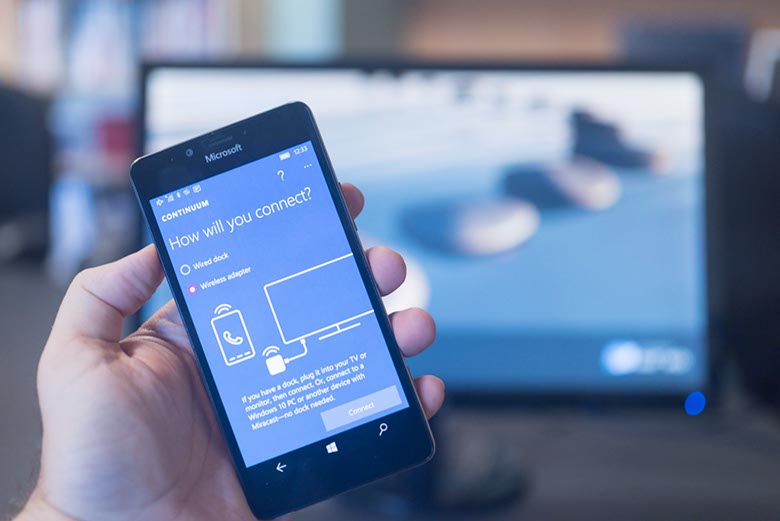 On your Continuum compatible Windows 10 Mobile phone, simply go to the Continuum app, select the Wireless Display option, choose the ScreenBeam Mini2 from the list and it will connect. 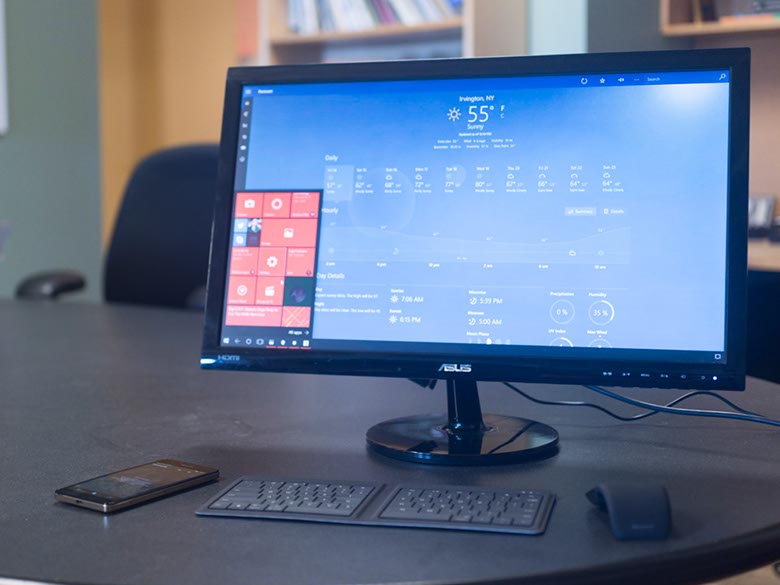 And just like that you’ve got your phone running a full desktop style Windows 10 operating system. Your start menu is about the same size as it would be on your phone, but now you’ve got a huge amount of space for your UWP apps to take up.  The taskbar now shows icons for active applications too, just like on full Windows 10. 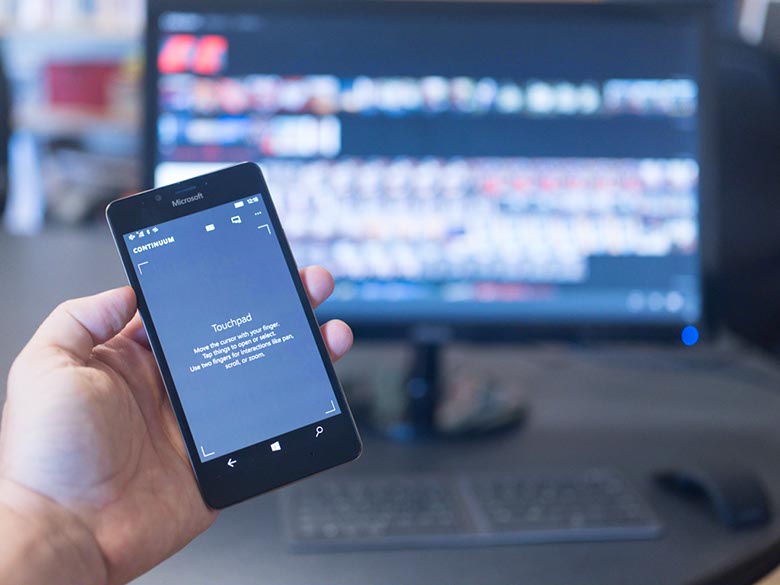 On the phone side of things, the touch screen becomes like a trackpad that you can use to move your cursor around on the larger screen. It’s very easy to use and works great if you don’t have a mouse plugged into the ScreenBeam Mini2 hardware. If you want, you can navigate away from this screen on your phone and use any other app just like you would if it were not connected to a big HD display. 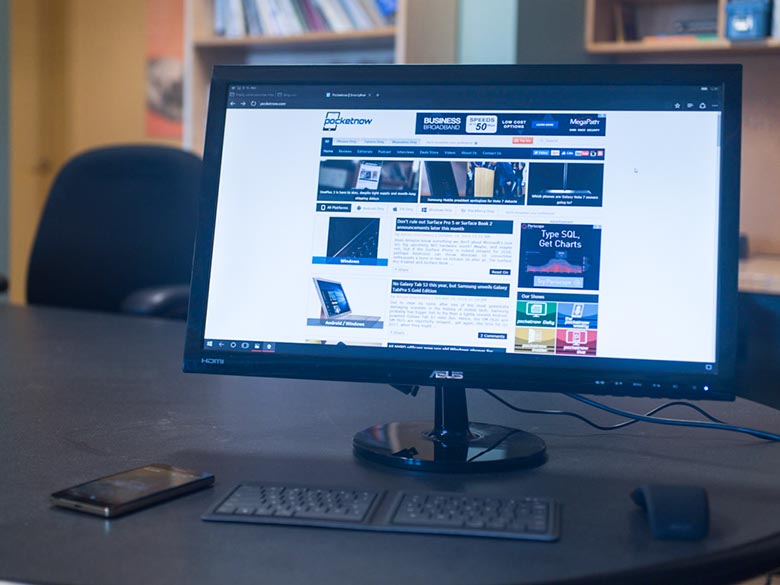 Since Windows 10 Mobile has the same Edge web browser as full Windows 10, in Continuum we get full sized websites just like you would on a desktop PC. 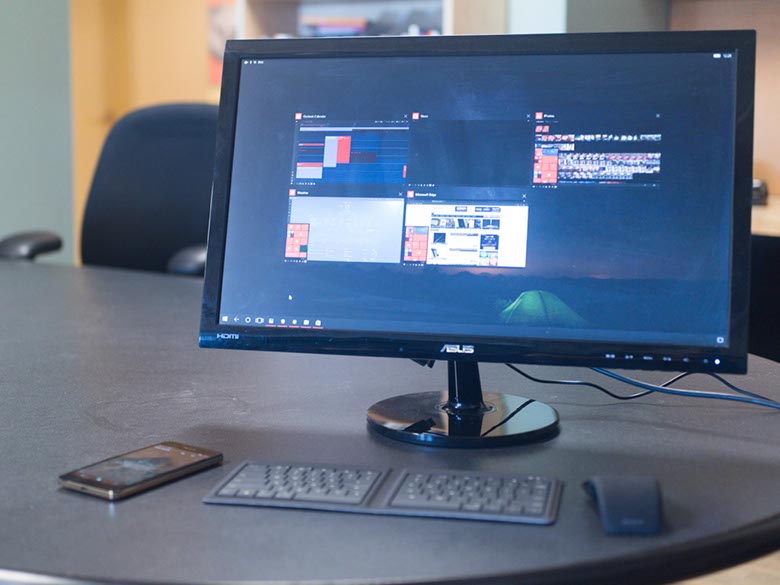 The task switcher button (and Alt + Tab) works exactly the same as the full Windows 10 desktop PCs.  Well, not exactly the same. These application windows cannot be snapped to the sides of the screens, nor is there an option for multiple desktops. Application windows are required to be full-screen as well, so you won’t see multiple overlapping Windows at least in its current incarnation. 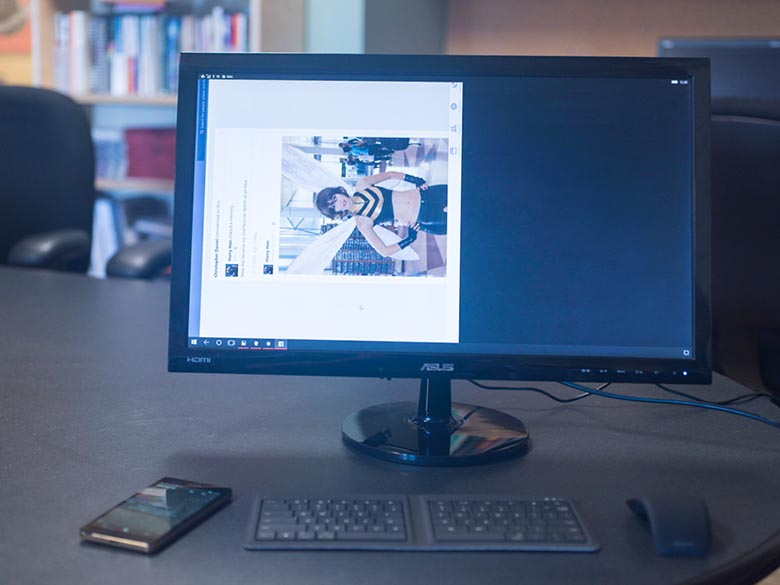 Some apps aren’t completely compatible with Continuum either. Here we see the Facebook UWP app not behaving quite right. 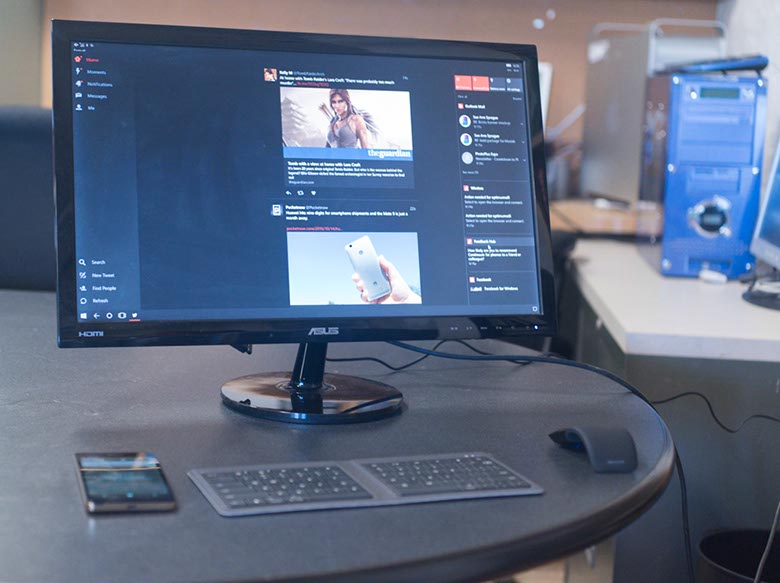 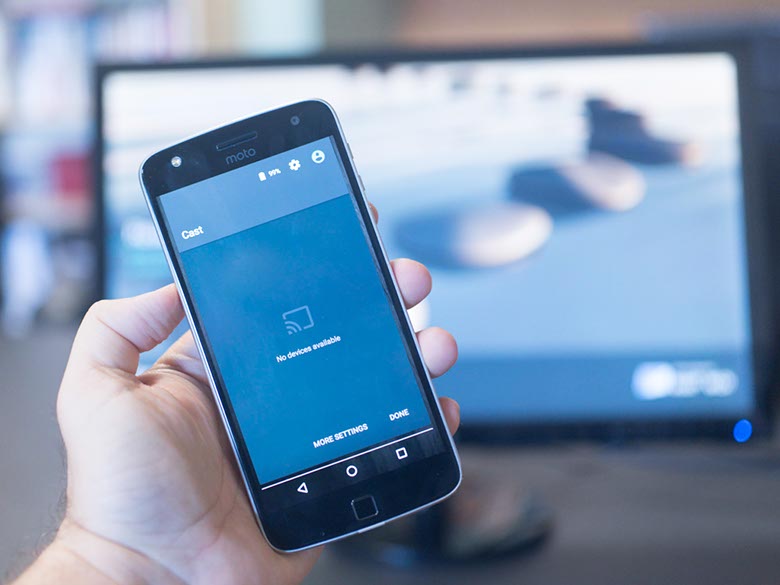 You can use the ScreenBeam Mini2 with other devices too.  However, I was unable to get Android to recognize the device. 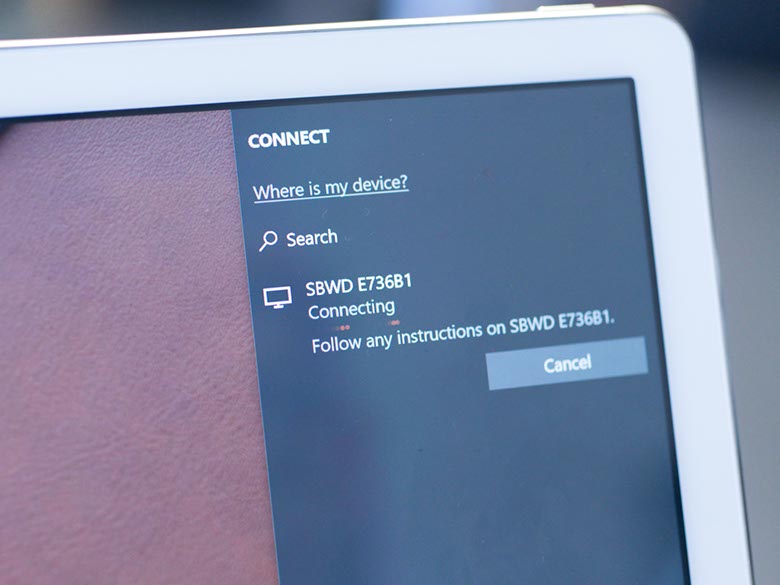 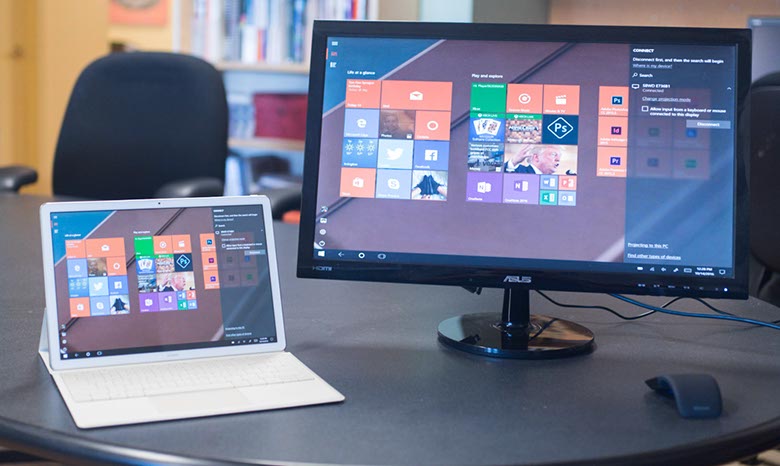 In fact, pairing a faster full Windows 10 device with the ScreenBeam Mini2 proved to be a much more responsive user experience compared to when my Lumia 950 wa 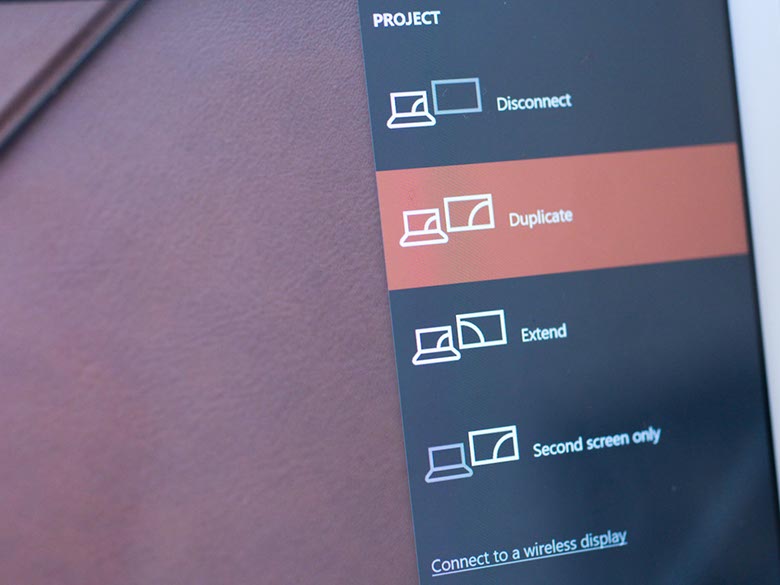 The ScreenBeam Mini2 Continuum Edition behaves just like any other secondary connect display would when connected to a Windows 10 tablet or PC. 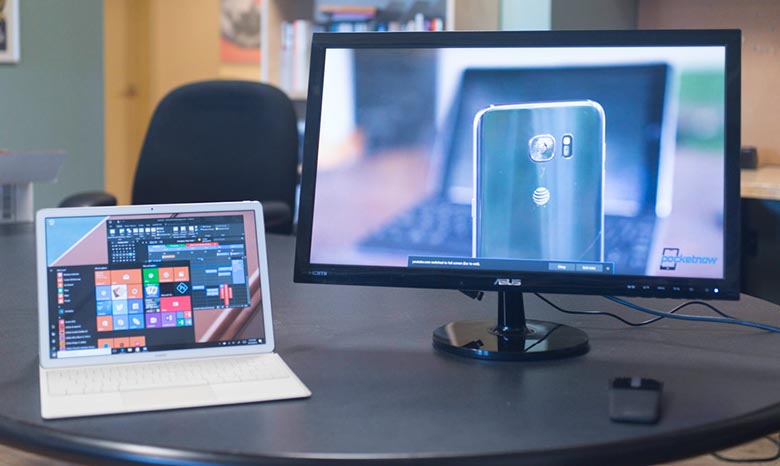 Multitasking works great. You can even stream video to the wireless display while using the regular display for other work. 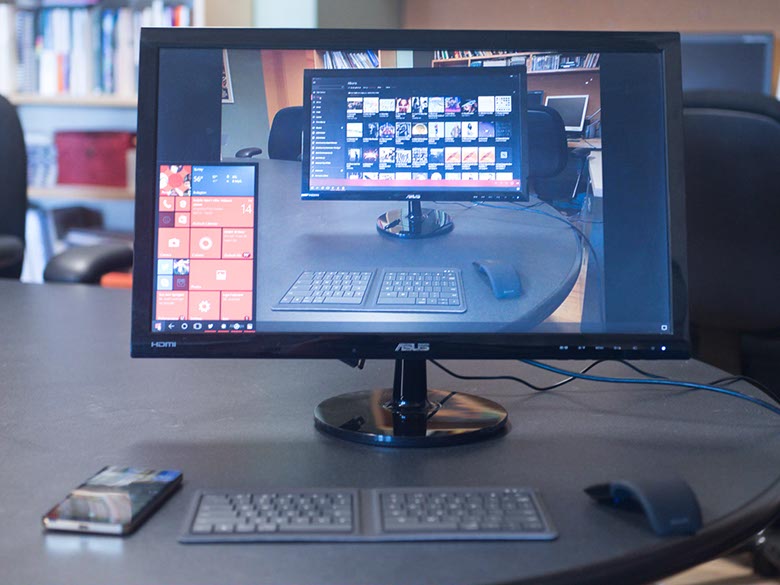 While the ScreenBeam Mini2 Continuum Edition is a very inexpensive (It’s about $50) and easy way to get your Windows 10 Mobile device working on a big screen with a keyboard an mouse, there are some drawbacks. For example, my Lumia 950 got awfully hot while using this. In fact, its battery started bulging and I had to replace it. The wireless display hardware itself also gets hot, so I’m thinking you should only use this for short periods of time. Continuum has limited utility as well since it doesn’t run real x86 programs like the full version of Windows 10 does. It would be so awesome if I could run the good version of Outlook on my phone and in Continuum! The lack of x86 support wouldn’t be so bad if the UWP versions of Microsoft programs were anywhere close to functional parity with the x86 versions, but they aren’t (Microsoft has a first party app problem too). Some of Microsoft’s own UWP apps don’t even support Continuum either, like the Xbox app. Those are really Microsoft’s problems though. The ScreenBeam Mini2 Continuum Edition does its job, but really what we need is a Windows 10 phone (and proper software) to make Continuum worth using.

It is powered by the Exynos 9825 SoC, which also powers the Galaxy Note10.