If you want a flip phone with a fingerprint sensor, wireless charging, a camera that can shoot 4K video and two full HD AMOLED screens… pay dearly.

While the US gets to see its first Android-powered flip phone in forever, Samsung has just made official another high-end clapper in China with a very uninspiring name. But it’s not about what it’s called — this is about what it can do.

It has a BIG.little quad-core processor (maximum clock of 2.15GHz or 1.6GHz) to power Android Marshmallow on a 4.2-inch full HD Super AMOLED display. If you’re keeping track, that’s 525 pixels per inch. Did we mention that there are two such displays on the same lip of the phone? The front one can be left Always On.

The other lip’s inset side houses a typical T9 setup with all the proper buttons for a regular phone. The selfie-camera is a 5-megapixel unit with f/1.9 aperture and flash. The rear camera can record 4K footage with its 12-megapixel sensor with pixel size of 1.4µm (lay man’s speak: fairly large), Dual Pixel focusing and f/1.7 aperture. 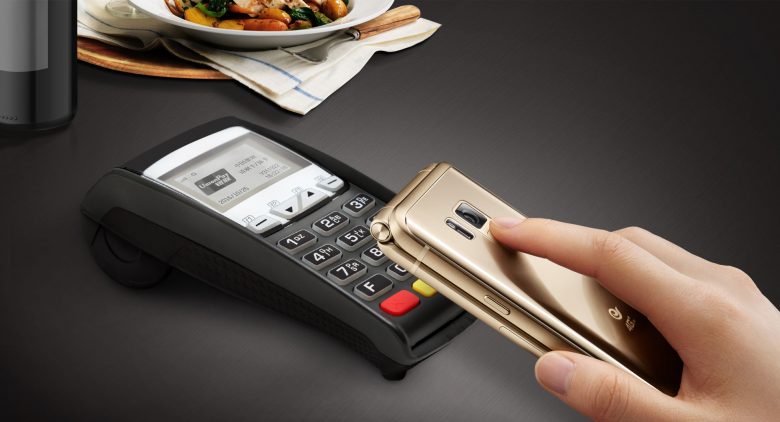 There’s a fingerprint sensor, NFC and MST technology, — why the hell not have Samsung Pay on this thing, why? — wireless charging, 4GB of RAM and 64GB of storage with a dual-SIM hybrid configuration that supports a microSD up to 256GB in capacity. Again, why the hell not? For rude word’s sake, there’s even Wi-Fi ac here!

One sacrifice you’ll have to make, though, is the lack of a headphone jack. Worse yet, the Micro-B standard will take its place — so no USB-C headphones, here. There is Bluetooth 4.1, if that’s any solace.

All of this to say that with a boar of a phone in a nostalgic form factor of dark blue or champagne gold, we’re talking maxed out dimensions: 127.8 x 61.4 x 15.8mm and 208 grams. A lot of that is supposed to accommodate the 2,300mAh battery inside.

No word on pricing or availability just yet, but we tend to follow along with SamMobile‘s expectations that this device will be in limited quantities and around $3,000. Suits us right.