Success Seems to Be Driving Samsung a Little Manic

Read why we’re a little bit worried about some of the decisions Samsung has been making concerning its smartphone and tablet lineups.
Published 23 January 2013, 10:20 EST

I’m a little worried about Samsung. Not “very” worried, mind you, but after hearing about some of the company’s upcoming products, looking back on what it’s offered over the course of the past year, and considering the recent success its smartphones and tablets have been seeing, it’s all enough to make me start questioning some of Samsung’s product decisions.

You might think that success would cause a company to really look inward, to try and divine just what it did that was so popular, and then extrapolate from there to lay out a course for the future. There may be an aspect of that in Samsung’s plans, but I’m concerned that success might be starting to go to its head, and a newly-bolstered ego could be driving it to make some bad decisions.

Samsung’s closing in on being the company behind a good third of all new smartphone shipments, and if it continues to grab market share at the pace it has in 2012, that goal could be well within its grasp later this year. This didn’t happen overnight, though, and I think a lot of its 2012 actions have been influenced by being the kind of company that’s well aware it’s crawling to the top, over its competitors.

Just look at the Galaxy S III announcement, arguably the most anticipated smartphone unveiling of 2012. Sure, there’s a strong case for the iPhone 5, but Apple enthusiasm is so expected at this point that it feels quite a bit less substantial. If you reflect on just how Samsung broke the news, without any carrier sharing the spotlight, or to a crowd of expo attendees eager to get to the next press conference, you might start to see this growing awareness of its stature to which I refer.

But what of it? Surely, Samsung has earned the right to get a little cocky, right? Granted, but there’s a risk that at some point that kind of mentality can lead to illusions of having a Midas touch, where the company can do no wrong. I think the first devices to really get me thinking about Samsung’s choices were two that we saw debut at the IFA, the Galaxy Note II and the Galaxy Camera.

With the original Note, there was a lot to like, and the only real sticking point was its size. Now Samsung was talking about making it even larger? Not to get too hung up on references to Greek mythology, but was Samsung trying to fly too close to the sun? Ultimate, my fears were allayed by news that the Note II would see only a modest bump is screen size, and more importantly, would do so without forcing the phone’s physical dimensions to grow in an objectionable manner.

For the moment, things seemed fine, but now we’re hearing rumors about a 6.3-inch Note III; I’ve got this sick feeling that Samsung convinced itself that the Note wasn’t a success because of the stylus or the software, but because it was bigger that its competition, and that oddity ultimately piqued consumer interest. Now that we’re seeing five-inch phones become mainstream, could Samsung be worrying that the Note II is just too pedestrian a form factor, and that going even bigger will solve any problems? 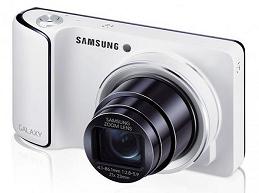 Then we’ve got the Galaxy Camera. While other manufacturers experimented with gimmicks like 3D displays in the past, Samsung generally seemed pretty grounded – it knew it wanted to make your standard phones and tablets, and didn’t venture too far outside the box. This hybrid was a bit of a gamble, but to Samsung’s credit, releasing the Galaxy Camera seems like it’s going to pay off; it’s a solid Android device (which we even got some use out of as a full-on smartphone replacement) as well as a quality camera.

What bothers me, though, are some of the assumptions Samsung made. It asks users to drop a lot of coin on the device, and without the benefit of heavy subsidies. It also presumes that users are going to be comfortable paying the full cost of a mobile data plan for a product that might only see irregular use. Sony’s also got big smartphone and camera businesses, and I can’t see it making the same sort of decisions that Samsung did here; in contrast, its market position results in a much more conservative, predictable device lineup.

OK, now so far I might have convinced you that Samsung’s behavior has been bordering on reckless, but how’s that manic? Well, in addition to some of these oddball product decisions, I can’t help but notice the furious pace at which Samsung seems to keep releasing… well, anything.

Samsung’s always had a lot of subtly different Android models in its stable, but when I look at some of the ones the company has coming up next, I struggle to understand why it’s releasing them, short of some sort of compulsion that is simply HAS to keep pumping-out phones – like if it stops to catch its breath, it’s suddenly going to lose its momentum.

Thinking about some of the models in the recently-leaked Samsung roadmap, my problem isn’t just that they’re a bit rubbish, but that they’re barely-rehashed old rubbish. The Galaxy Pocket Pro is probably the most glaring example. That’s a shame, because I really like the idea of super-small smartphones. What I can’t stand, though, is when manufacturers equate small sizes with underpowered hardware. That was the Galaxy Pocket’s original sin, so I was hopeful that the Pocket Pro would keep the same dimensions and really supercharge the handset’s performance.

Instead, there’s no big storage bump, the same two-megapixel camera, and another sub-1GHz processor. Samsung did manage to make the smart choice of raising the screen resolution up to HVGA, but ultimately the handset feels less like a well-thought-out sequel, and more like a compulsion to just introduce another model.

In the end, I don’t know if that sort of drive is really so bad. If Samsung’s got the money to throw at such projects, more power to it, and if some of these shots in the dark really pay off, so much the better. I just wish it seemed like Samsung was being a little more thoughtful in the products it releases, because it’s only going to take a few flops to really undo all the hard work Samsung has put into firming-up its reputation as king of the smartphone mountain.