Samsung schedules next Unpacked event; get ready for the Galaxy Note III

Find out all of what we’re expecting to see revealed at the Samsung Unpacked event next month.

Back at the beginning of July, we caught wind of a rumor suggesting that Samsung’s next phablet, the Galaxy Note III, would make its debut on September 4. Really, that was all sorts of not surprising, since we’ve been looking forward to the Android launching during this year’s IFA in Berlin. Still, it was nice to have a precise date rather than the whole of the expo to anticipate the Note III. Then just a few days ago we heard that very same date mentioned again for the phablet’s unveiling – while still nothing official, it was sounding more and more likely. Today we get all the convincing we’re going to need, upon Samsung sending out invites for its next Unpacked event – scheduled for September 4.

Technically, this is just a save-the-date, but the important bit is that this event is now a lock. There’s just the slightest hint at what to expect for the event: NOTE the date? Obviously, we’re hoping to get news of the Note III. Beyond that, there’s also been word that the manufacturer may use this venue to introduce us to a new smartwatch.

As for any new Galaxy S 4 variants, we’d say the odds are a lot less likely, but we’d love to be surprised. In just over a month, we’ll have all the answers we’ve been looking for. 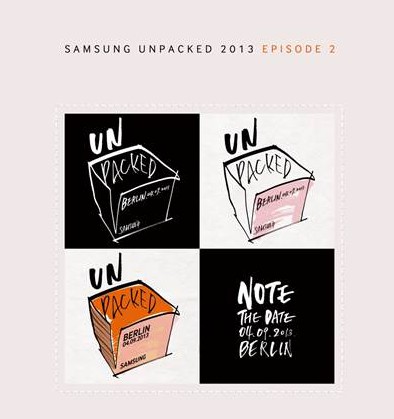