Samsung, the Galaxy S 4 Active is not as rugged as we want

Phones are expensive. It’s ironic but true. I find it odd that the average computer can be much more affordable than the average smartphone. Shouldn’t this be the other way around? If we were to judge the cost of building a computer in comparison to a smartphone, computers are bigger; they require more powerful technology to work, so in basic but un-researched logic, smartphones shouldn’t be as expensive as they are. The reason why we pay so much money for them is because there are too many third parties involved in the smartphone industry, and because they’re the new thing that everybody wants to buy now. Computers had that stage, and now it’s shifted.

Probably the biggest reason why the price tag of a smartphone disappoints me is because their basic usage makes them prone to damage. Not every smartphone survives after the first drop, and the survival rate is also dependent on the height of the fall or where it falls. Don’t expect it to be of much use to you if it falls on a pool or a toilet. We carry them in our pockets and sweat can easily get to them, or the unexpected rain that caught us in the middle of the sidewalk. All in all, I feel that for the amount of money that I pay for a phone, it shouldn’t be as fragile as it is.

Most people buy the oddest and ugliest cases you can think of in order to protect their investment. I’ve always been against cases, and most of us at Pocketnow feel the same way. Slipping a case on a phone is like going to buy seat covers in order to protect the leather on your brand-new BMW. What’s the point of spending so much money on a car if you wont’ be able to enjoy it in the way it was designed and intended? I laugh every time I see my brother’s Galaxy S III covered in enough rubber to make the Motorola DynaTAC seem thin, but hey, he paid $700 for that phone, so I don’t blame him for trying to protect it.

2013 was promising to be my year when it came to this department. I’ve always wanted a rugged phone that doesn’t look like a tank, just like waterproof watches have become quite elegant in the last two decades. I tried my luck with a couple of Motorola phones last year because of their nano-coating technology, but splash proof isn’t waterproof sadly. Sony’s launch of the Xperia Z marked the moment where I finally said; this is it! Sadly, after Taylor reviewed it, I decided that its shortcomings were enough for me to wait for another good solution.

Then came the Samsung Galaxy S 4 Active. I know not all of you like Samsung’s design language, but beauty lies in the eye of the beholder, and I loved it the first moment I saw it. For me this was a sexy phone with all the necessary qualifications to become a true companion for my daily routine. I do a lot of working out during the week, so my ability to track my workouts and play some music is always a must. My biggest problem is that I sweat more than the average human, and armbands weren’t enough to protect any phone. Running and being caught by rain on mile 4 out of 6 is also a common problem, so I needed this phone, and I needed it bad.

To my bad luck, as Tony had a chance to play with one in London recently, I can’t tell you enough how disappointed I was when he gave me the full skinny on what rugged meant for Samsung. I think these guys don’t get the point, and here’s why:

The whole idea behind a rugged gadget is for it to be usable when in stressful situations, right? I don’t need a phone that’s only able to protect itself when wet. I have pockets; a jacket or I can buy a case for it if all I wanted to do was protect it when wet. In my specific usage scenario, I need for my phone to actually work as I run, and as Tony shows us in his hands-on experience with the Galaxy S 4 Active, the phone just survives, but you can’t use it.

Surely survival for some is enough. It’s great to know that if your phone got wet today, you can just wipe it off and start using it again regardless, but it’s not really what most of us were expecting from this device. This is like buying a waterproof watch and have it not work when it rains, or buying a pair of sweat-proof headphones that will stall when you do sweat.

Competitors are doing a better job 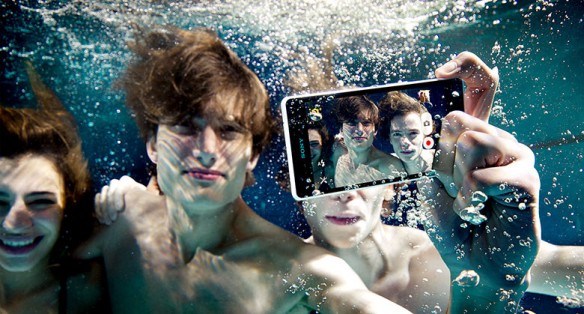 As disappointed as I was with Sony’s display on the Xperia Z, they haven’t necessarily been sitting in their laurels. The Xperia ZR isn’t just a waterproof phone, but you can actually operate it underwater and even use it for filming a video, taking photos, etc. I’m sure that Samsung could’ve really wowed us with the Galaxy S 4 Active by taking the concept of the Xperia Z even further and making this device actually better, but instead, they took a step back.

Nobody buys a candle to hide it under the table. You bought it because you need its light and you want to be able to use it, right? I really wanted the Galaxy S 4 Active to be my daily driver. I love the design, and it would’ve been perfect if it only delivered on its promise. I hate it when companies don’t get it right. Lot’s of great ideas with terrible execution all lend to having specific products fail instead of succeed.

What about you? Are you interested in a Galaxy S 4 Active, or any device in particular just for its rugged specifications? What would you use the device for mainly? Do you want a phone that just survives, or that you can actually use under the rain? Leave us a comment and share your needs.