Samsung tablets are a dime a dozen, and most of them are as forgettable as the last. Read why Samsung would be better off making fewer, better tablets.

In the tablet space, Samsung is a quickly growing giant. Almost single-handed, Samsung has cut Apple’s tablet market share in half – from over 60 percent in 2012 to 30 percent in Q1 this year – while snapping up 23 percent of the global tablet share in Q1.

We never had any doubt this would be the case, even with how half-baked the first two or three generations of its tablets were. Take the original Galaxy Tab, for example. It was a 7-inch knee-jerk reaction to the iPad. It ran Android, of course, but it was a stretched version of the phone-based OS. Google had not yet developed a home screen layout for tablets, so Samsung custom built a larger version of its TouchWiz UI. Applications developed for phones worked on the tablet, but they were stretched to fit the display, the hardware was unimpressive, and the overall experience felt exactly like what the tablet was: an unfinished product which was rushed out the door.

I’d like to say Samsung realized how unpolished the Galaxy Tab was and drastically improved the dozens of tablets which followed. Unfortunately, that wasn’t the case. Here we are three and a half years later and Samsung is only now beginning to offer refined, powerful, reliable tablets.

Granted, part of that latency in releasing polished tablets is Google’s fault, as well as third-party developers.

Google didn’t release a version of Android which officially supported tablets and other larger displays until February 2011. Version 3.0 was called Honeycomb and it was made specifically for tablets, not phones. It was the turning point for Google’s mobile OS in terms of design. It was the first time the world got to see what Matias Duarte, one of the masterminds behind webOS design, was able to do with the monstrosity that was Android in 2009. 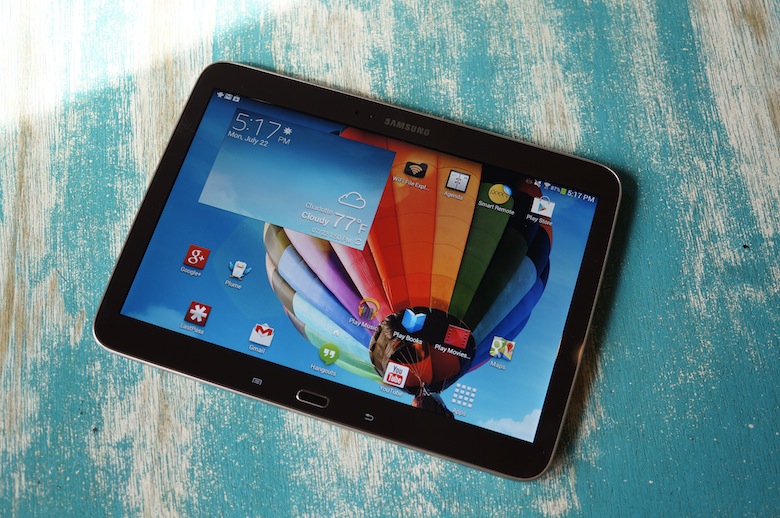 Third-party developers also watered down the Android experience on larger devices by not properly coding their applications with efficient and flexible layouts. Applications coded to work well on phones stretched to fit much larger displays. The result was a lot of wasted space and a terrible user experience.

Still, Samsung didn’t do much to fix the issue on its end. It continued to produce varying sizes of its Galaxy Tabs, all with ill-conceived and poorly optimized software. TouchWiz, especially at the time, brought little to no added value to the tablets while only increasing bugs, glitches, and performance stutters.

All the while, Samsung seemingly had trouble keeping up with its competitors in terms of specifications and build quality.

Take the Galaxy Tab 3 10.1 I reviewed last year. I felt I was being generous by giving the tablet a six out of 10. The hardware scratched remarkably easy. Our review unit arrived somewhat scratched. (That happens from time to time – other reviewers are a little rough on equipment.) No harm done. But by the time I was done with the tablet, the front and back of the Galaxy Tab 3 10.1 was horrendously scratched. And I assure you, I’m always extra careful with equipment that isn’t mine.

Aside from that, this tablet could not be more generic, mundane, and boring. It was one of the first Android tablets powered by an Intel Atom processor, but it was a 1.6GHz dual-core CPU with 1GB RAM and 16 or 32GB storage. The display was 10.1-inches diagonally with an unimpressive resolution of 1,280 by 800 pixels. Its 6,800mAh (25.84Wh) battery was the only truly respectable feature on the long, drab list.

For comparison, take the Transformer Pad Infinity 700 from ASUS. It came with a 10.1-inch display with a resolution of 1,920 by 1,200 pixels, the same RAM, but the storage options were doubled (32 or 64GB), a Tegra 3 chipset made of a 1.6GHz quad-core CPU, and a 25Wh battery. Minus the display and storage, the specs are comparable, right? Sure, except for the fact that at the time of the Tab 3 10.1 launch, the Transformer Pad Infinity was nearly a year old, they both launched at roughly the same price, and the Transformer Pad was made of a high-grade aluminum and built very well, whereas the Galaxy Tab 3 10.1 was made of a cheap, flimsy, slimy plastic. 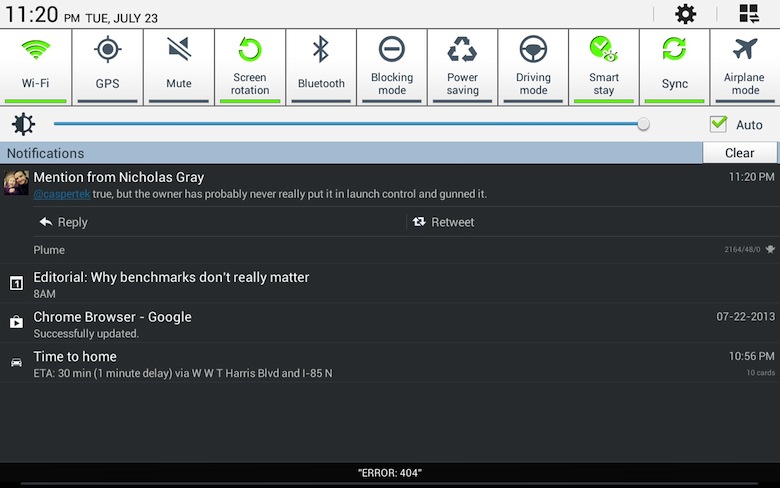 And even in 2013, Samsung was still releasing tablets with full-screen notification shades, leaving over half the display unused when the shade was pulled down. 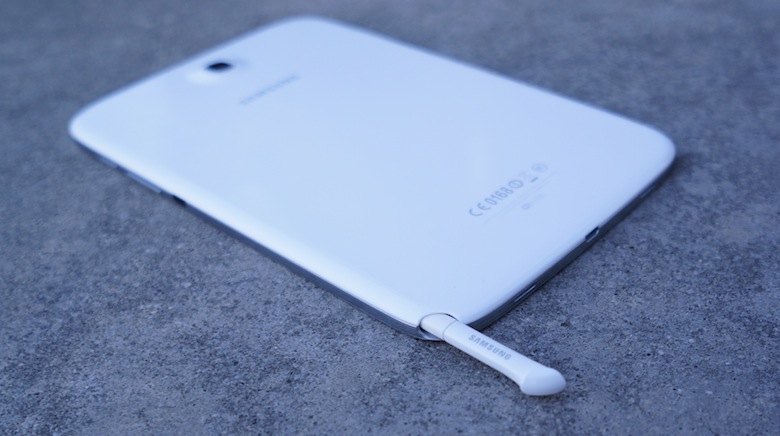 My short time with the Galaxy Tab 3 10.1 perfectly corroborated my feelings with every Samsung-made tablet before that, save for the Nexus 10. The Galaxy Note 8.0 was yet another sub-par, iterative tablet that didn’t really have a place among the competition at the time. The Galaxy Tab 2 10.1 was a lagfest with many of the same problems above – cluttered software, poor performance, and cheap hardware.

For whatever reason, Samsung continues to make tablet after tablet, most of which overlap one another and most which are not nearly as polished as Samsung would have us believe.

I used the first Galaxy-branded Samsung tablet I would ever recommend to those in search of a nice Android tablet in March: the Galaxy TabPRO 8.4. (That award could have gone to the Galaxy Note 10.1 2014 Edition, had it been powered by the Snapdragon 800 like the LTE instead of the stutter-happy Exynos 5 Octa.) By the 8.5 out of 10 rating I gave it in my full review, you would likely assume the Galaxy TabPRO 10.1 would garner the same recommendation, right? Wrong. Michael found the Exynos 5 Octa to be a poorly optimized chipset that, paired with that disjointed and incomplete software, made for a particularly forgettable user experience and tablet.

Unfortunately, we didn’t have a chance to give the larger Galaxy TabPRO or Galaxy NotePRO a go, but chances are, those are just as hit or miss as any previous Galaxy-branded tablet.

The worst part is, rather than going back to the drawing board and getting the next tablet right, Samsung is continuing to bake up new models and toss them out to retail shelves to move a few hundred thousand units. Ultimately, the company will ignore the laments of those who were misled – likely by the familiar Galaxy brand which, in its defense, is reliable and and highly commendable in the smartphone space – to buy one. That’s been the standard operating procedure for the last four years. Why change now?

Last week alone, Samsung found itself in headlines four times over new or upcoming tablets. It made the 7-inch Galaxy W  tablet official. Barnes & Noble announced it would be teaming up with Samsung to co-brand some of the upcoming Nook tablets as Galaxy Tab Nook tablets. (That name, though.) And two rumored tablets surfaced: the Galaxy Tab S and an unnamed, 12-inch tablet prototype with a 4K display and Snapdragon 801 SoC.

My point? Unlike with its smartphone business, where it constantly knocks a few home runs every year (ex: Galaxy S3, Galaxy S4, Galaxy S5, Galaxy Note, Galaxy Note II, Galaxy Note 3, Galaxy S5 Active, etc.), its tablet lineup has way more misses than hits. Yet Samsung isn’t slowing down its tablet production to get it right, but ramping up production instead. 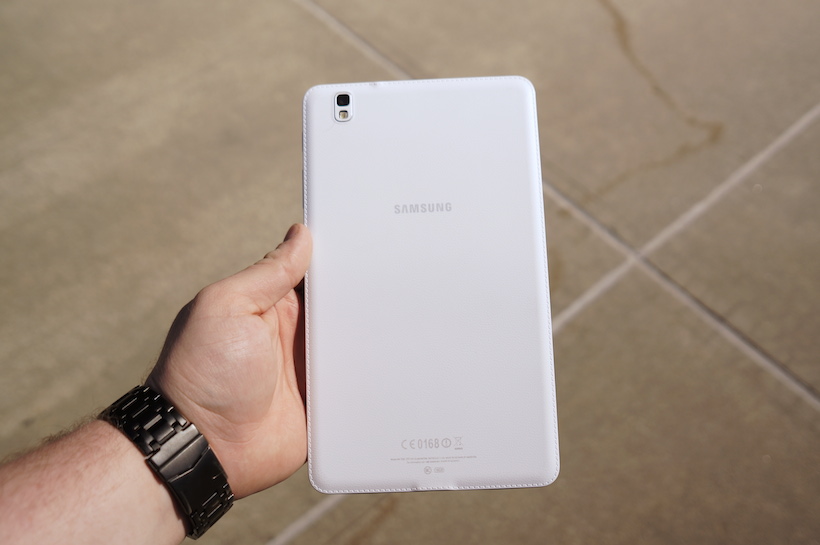 I’d be money that most of these products launch half-baked, come with poor support for software updates, and stutter and lag far worse than any comparable stock Android tablet.

To top all this off, Samsung is holding an event later this week where it will supposedly announce even more tablets. Joy.

The fact of the matter is, while Samsung’s way of saturating the market with every last possible spec, form factor, and feature combination possible may help boost market share, we could all stand to see fewer, better Samsung tablets. Samsung could largely benefit from consolidated efforts, fewer projects to focus on, and a better overall product.

Like Michael and I both said after reviewing the Galaxy TabPROs, Samsung was headed in a great direction with the new Samsung software. While it felt unfinished and rushed, it was cleaner, smoother, and more coherent than past versions. The hardware is better than ever, inside and out. And most of its newer tablets are turning quite a few heads. 4K displays? Insanity. Top notch specs? About time. Pair those things with the improved software, and Samsung finally seems to be honing in on a recipe that really works.

But that doesn’t change the fact that this year alone, Samsung will have a half dozen tablets that have no place in this world. The Galaxy Tab S and Galaxy TabPRO 10.1 will have similar display resolutions and sizes, similar specs, and likely similar builds and designs, yet they both will exist side by side. Such is the case for a handful of Samsung’s models. 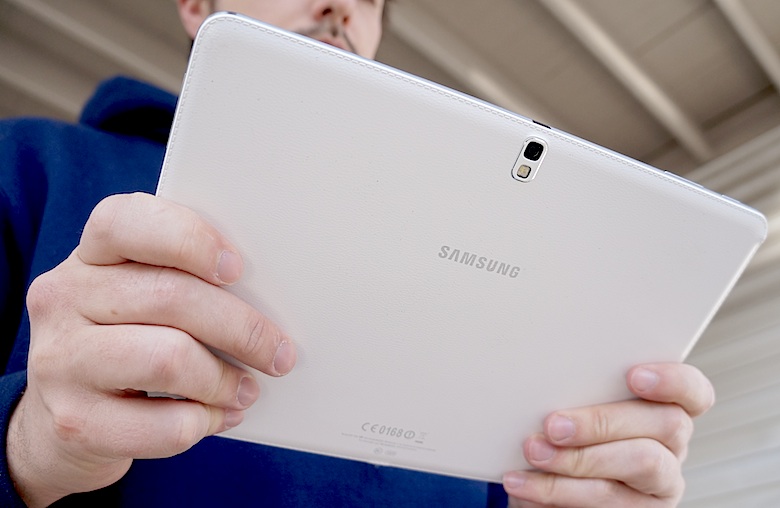 The thing is, if Samsung got it right in the first place, it wouldn’t need two dozen tablets each year to accomplish what Apple or other manufacturers can accomplish with two or three different models. It keeps introducing new models and new lineups rather than fixing the few that already exist. And its lead to a market full of Samsung tablets most are (or should be) too afraid to buy.

Samsung has nailed down its smartphone business pretty well, even if its still launches countless phones every year. Its tablet business and products aren’t mature, polished, or reliable enough, as a whole, to sell themselves quite like the Galaxy S5 or Galaxy Note 4 will. In fact, it’s quite the contrary.