Confusion continues to swirl around a cryptic SM-G8850 device many initially expected Samsung to release as a diminutive sibling of the Galaxy S9 and S9+. The S9 Mini theory was of course debunked by Tenaa’s detailed spec sheet, which appeared to include a “full-sized” 5.8-inch screen with 2960 x 1440 pixel resolution, up to 6GB RAM, a 3000mAh battery, and dual 12MP rear-facing cameras.

But now we’re starting to doubt this is a “regular” China-first S9 on steroids as well, since AnTuTu has revealed the ultra-high-end Snapdragon 845 processor is actually being replaced by a mid-range Snapdragon 660. What’s odd is that Tenaa didn’t list the SoC’s make and model, but it did hint at something much more impressive, with CPU cores clocked at up to 2.8 GHz. The 660 is instead an octa-core combination of 2.2 and 1.8 GHz Kryo 260s, which isn’t exactly humble, but it doesn’t qualify for flagship classification either. 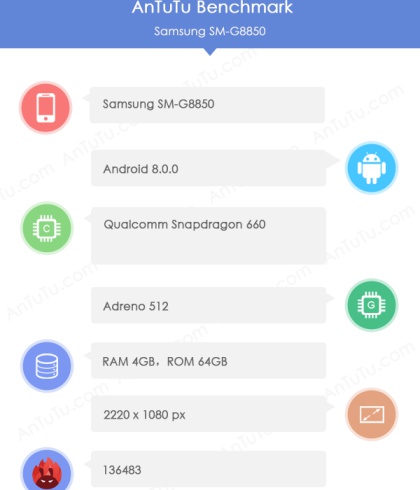 A good guess would be the SM-G8850 will in fact end up branded as part of the upper mid-end Galaxy C family, although the model number doesn’t fit that premise either. Our guessing game is further complicated by the 2220 x 1080 display resolution listed in the AnTuTu benchmark file. Then again, that doesn’t necessarily mean Tenaa’s figures are incorrect, as the WQHD+ (1440p)-capable S9 and S9 Plus actually default to FHD+, aka 2220 x 1080 pixels.

Bottom line, even if the Snapdragon 660 is indeed onboard the SM-G8850, we have plenty of reasons to remain excited about this mysterious phone. Android 8.0 Oreo definitely runs the software show, and odds are you’ll be able to choose between 4 and 6GB RAM options, with at least 64GB storage space in tow.