Samsung really did something right at their #poweron tent at an all-day music fest in Chicago and showed why it’s great to have a removable battery.
Published 08 August 2013, 07:00 EDT

We try to keep things on the level here folks. Despite what many claim, tech writers in general try to keep bias off the keyboard when writing. Sure we all have our favorite devices, and some devices we’d just as soon feed to an angry squirrel than use as a daily driver. That’s because we’re passionate about technology. You can’t have passion without some amount of preference. But that preference is channeled into useful and constructive criticism and praise which makes us the phone ninjas you read every day.

But every now and then, something comes across the feeds that throws off the delicate balance of equity we maintain and makes us swing one way or another, even if briefly. Here’s a glimpse at just such a moment.

Last week, I saw a tweet that made me just point at the screen and say “Now HERE’S a company that GETS IT.” Samsung tweeted about their #poweron campaign in my sweet home, Chicago. Lollapalooza, for those of you who hate music, is a multi-day multi-stage festival of who’s who in the trendy music industry. Events typically last all day with musician after musician hitting the stage and blowing your ears out. 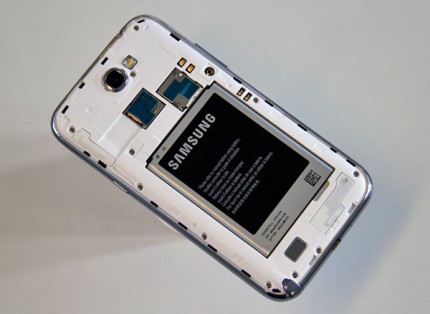 Samsung was there and for the price of a tweet and a hashtag, they allowed you to swap your old battery in your Galaxy device for a brand new one. Instantly, a full battery and you’re off to tweeting and texting and photographing all of your favorite artists in a New York minute.  This folks, is genius and in my world deserves a big thumbs up for marketing epicosity. As a matter of fact, at the SXSW festival in Texas, they even delivered the batteries to you. Now THAT’S epic.

Better to have it and not need it…

But it also says something for swappable batteries. HTC, Nokia, and Apple could not run such promotions for their flagships. Sure, they could offer charging stations which would become clogged in minutes while phones got tethered for 30-50 minutes to get a half charge or so. But with Samsung and their removable battery packs, you’re back in the mosh pit in time for Head Like A Hole and March of the Pigs.

Sure this is an extreme example. We don’t all go to festivals with Samsung battery swaps every day. But for those times that you do, you can. Everyone else has to go into power-saving mode and save their photo uploads until they get back home at 1:00 in the morning when everyone’s asleep.

The Pocketnow TLDR is a series of sub-500-word editorials aimed at getting you in, out, and back to life. Comment is always invited below, as well as on Facebook, Twitter, and Google Plus.