Last fall we heard about a crazy Android design from Samsung, mirroring some dumbphone designs of years past. The SCH-W999, unlike the vast majority of smartphones out there, was a flip phone with a standard numerical keypad. While highly unusual and more than capable of piquing our interest, the phone never made headway outside of China, and we quickly forgot about it. Now, its successor’s on the way, and while we similarly won’t see it released outside China, its modern specs and sky-high price have definitely managed to capture our attention once again.

The SCH-W2013 keeps the same basic design of the W999, with a fold-open flip-phone construction featuring both internal and external displays. While both here are only in a WVGA resolution, at only 3.7 inches each we really wouldn’t expect to see a much higher-res figure. The phone runs a quad-core 1.4GHz SoC (presumed to be an Exynos 4 Quad) and has 2GB of RAM, putting it on solid footing when compared to devices like the Note II. The W2013 has 16GB internal storage, expandable via microSD, and will arrive running Ice Cream Sandwich.

Make no mistake: this is not a smartphone for your average user. While Samsung has yet to confirm the W2013’s price, it’s expected to be somewhere around the $3000 mark. Honestly, for that kind of money we’d expect these already good specs to be even a little better (you couldn’t spring for 64GB flash, Samsung?), but when you’ve got that kind of money to throw around on phones, you probably aren’t sweating the details. 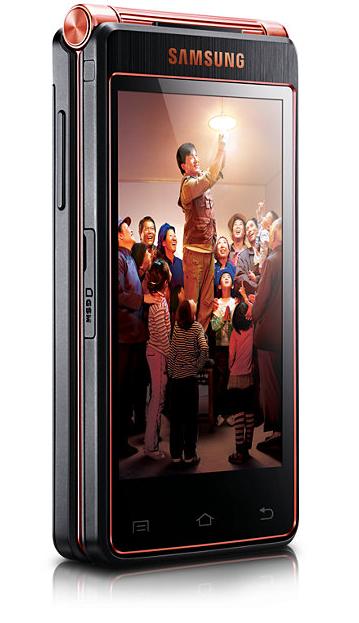 We keep getting more information about the upcoming Samsung Galaxy S21 series, which now also includes color options for all three variants

Can’t pick one between Apple’s new iPhones? This iPhone 12 Mini vs iPhone 12 comparison will help ease the dilemma!

It seems that 5G won’t be so great after all in the latest iPhone 12 lineup, as new tests show that it has a massive impact on battery life
YouTube 1.8M
Facebook 570K
Twitter 197K
Instagram 133K
RSS