Hopping off the beaten path for a second, we heard a quick mention during Samsung’s Unpacked event this year (you know, the one with the Note 5 and S6 edge+) about the company pouring more investment into wireless charging. Of course, what would help the cause out is a bump up in charging rates and more device compatibility for the standard. While we’ve solved one red-line device compatibility issue, it would be Samsung to provide a prominent solution to the other with its Fast Charge Qi Wireless Charging Pad.

Thing is, while the Qi standard already heats your device and the charging pad up, we’re talking about “Fast Charge,” here. As in, 30 percent faster than normal Qi chargers “Fast Charge.” And with more heat, comes more responsibility. And fans. The admiration, the adoration- well, actually just one of them (and of the spinny type, too), as hinted in the manual below. If you want a hint, look at the “Device layout” section before the diagram. 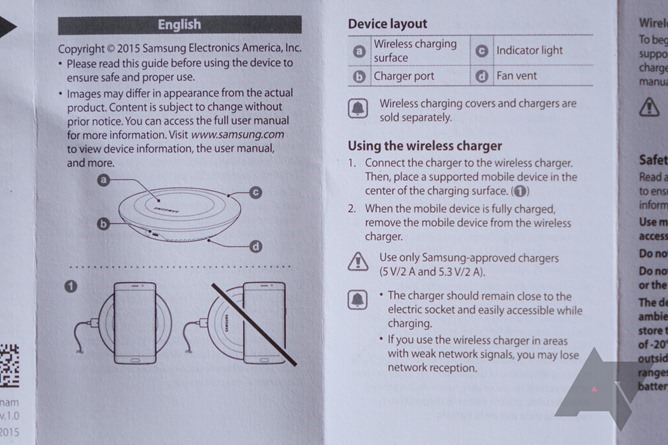 It’s reportedly quiet, even in close proximity. And it could as well be a necessity, if not just a cooling aide. But hey, we think it’s pretty cool.

Today’s best deals come from Amazon, where you will find the LG Gram laptop, Apple’s M1 Mac mini, and more devices on sale

The new Galaxy S22 may support 65W fast charging on some of the highest-end models, which would likely be the Ultra variant.