Samsung may have finally nailed a decent Galaxy Note tablet

Samsung may be the king of smartphones, but every single time they’ve launched a tablet in the past, I cringe. You can bet they’ve made me cringe continuously as well, since I’ve lost count of the amount of Galaxy tablets in the market. Some people argue that the only reason why Samsung sells so many smartphones is because of their marketing, and even though there’s a high level of accuracy to that remark, that’s not as easy as you think. If the product is not good, customers have a window of return, and we do know a ton of cases of people that have returned products because of that. Marketing a product is not as easy as just filling TV with ads. Palm did that, and they failed terribly, even with a good product. Both the product and the marketing plan have to know exactly what a user wants, and in the case of Samsung, as much as you debate their excessive use of gimmicks and plastic, I guess their bottom line speaks highly of their knowledge of what their users want.

It took me a while to understand why Samsung has had such good luck with phones, and such bad luck with tablets. It actually required me to know some people that have owned both Samsung tablets, and Samsung smartphones, to understand why there’s such a disparity. As a good friend once told me: “I love my GS4 to death, it works and is very reliable in the things that I want, but every time I pull out the Galaxy Tab 10.1, I become frustrated. Going from 1080p on a phone to 1080p on a tablet is terrible. The tablet is always crashing, and the user experience is sometimes for a phone, and sometimes for a tablet. Thus, there’s no added benefit in being in this Galaxy ecosystem, and worst of all, this Galaxy Tab is in no way better than an iPad mini that’s less expensive”.

Some of you may find those words harsh, but they’re true. If you try to use any Android tablet that’s not a Nexus 7, there’s tons of room for frustration. It’s funny how Google mocked the original Galaxy Tab for its 7-inch form-factor, but the disparity in landscape Android apps is still a problem big enough to even make the Nexus 10 look bad. The only difference in the case of the Nexus 10 is that the screen resolution makes the viewing experience pleasant, as long you use it for consuming content that’s optimized for it.

So why is it that yesterday’s announcement of the 2014 edition of the Galaxy Note 10.1 gives us a positive vibe? Well, even though pen-input on a tablet is more than a decade old, we’ve got to give props to Samsung for their Galaxy Note smartphone. It’s not only the only phablet that gets it right, but Samsung also bundles the phone with added functionality that allows you to take advantage of the S Pen, with or without third party apps. Our biggest issue with the tablet variants was mainly that their screen resolution was terrible, and that the implementation of TouchWiz has never been the most reliable on a tablet. This would actually be the first Samsung tablet that I ever praise, and these are the reasons why:

TouchWiz can sometimes be a good productivity tool

I got myself a Galaxy Note II for more than just the S Pen. I honestly find it pointless to have a phablet if the only thing you get is a bigger version of Android, with less pixel density. That’s mainly the reason why I stayed away from the original Galaxy Note. What the Note II nailed best for me was in the little things like Multi-screen support. I found it to be genius, since hey, you have a big screen that makes multi-tasking a pleasant experience.

I’ve always desired a tablet with that same functionality, but screen resolution is also a big deal for me on large tablets. I read a lot of magazines, and do my fair share of book reading as well, and if a tablet has the intention of replacing printed versions of anything for me, pixels should never be part of the experience.

The new Note 10.1 fixes the pixel problem, and even though I’m not really big on using the stylus, I’ll admit I’m always happy to have the option to use it whenever I need it. Don’t get me wrong though, I hate the visual aspect of TouchWiz as it is, since I find it too convoluted, but I have to admit there are things to praise about it.

The apps may or may not be an issue 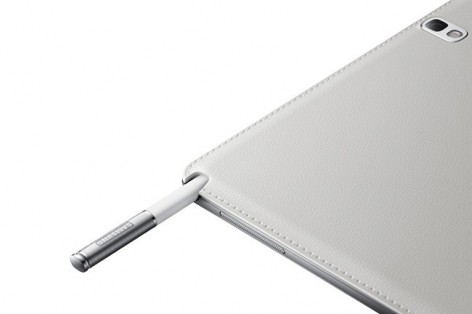 One of the things I love and hate the most about the Galaxy Note II, is that the S Pen was designed for TouchWiz. I love it because that forced Samsung to build the device with enough apps to allow the phablet to be useful without the need of third party apps supporting it. And then I obviously hate it because not every one of the apps I need is supported.

Still, with the Nexus 10 and now this new Galaxy Note 10.1, you could say we finally have two great tablets that make 10.1-inch Android tablets interesting. The more these sell, the more developers will be compelled to support them.

Obviously, as my title states in this editorial, “Samsung may have finally nailed it”. It’s still a product we need to test and review before we can recommend it to anyone. I feel Samsung is finally giving this a step in the right direction, but then again, it could also be that the software is not so great once we review it. Any Galaxy Note is one of those products that you can only buy if you actually like TouchWiz, since it’s pointless to have an S Pen outside of Samsung’s proprietary UI. Samsung’s improvements to the software are key to its success.

I guess my biggest question left to you is if you like the new Galaxy Note 10.1? Would you buy it if the price were right, when compared to the iPad 5 that’s about to launch? For me, it will all depend on our review, but leave us a comment.