However hard it might be to contain your indignation in regard to Samsung’s Android 6.0 upgrading sluggishness, it’s important to remember the Korean device manufacturer never actually issued any public deadlines or timelines.

Besides, things are finally starting to fall into place, as select Galaxy S6, S6 Edge, Edge+, and Note 5 owners in various global markets can now pull Marshmallow goodies over-the-air. With a bunch of TouchWiz tweaks on top, obviously, including a couple that look like they’ll improve the user experience instead of slowing down operations.

By the end of the month, the four 2015 flagships should leave Lollipop behind worldwide, probably followed by M promotions for the Galaxy Note 4 and Note Edge in April. The two late 2014-released phablets were previously tipped to score their OTA updates in Q1, but a newly leaked document dated February 29 suggests next month is now targeted. 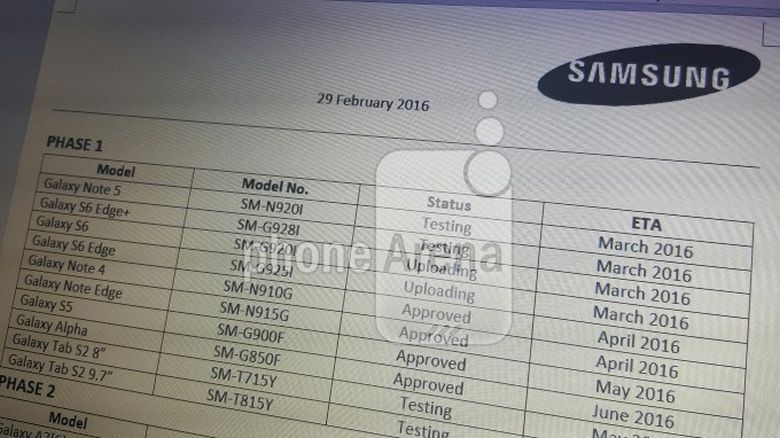 We can’t rule out the doc being fabricated, but if it’s legit, at least a couple more Android Marshmallow makeovers for Galaxy phones are already “approved.” They’re purportedly headed to the Galaxy S5 in May, and Galaxy Alpha in June, which isn’t half bad given the devices’ advanced age and withering popularity.

Meanwhile, tests for Galaxy Tab S2 updates are still ongoing, yet both the 8 and 9.7-inch variants could move away from Lollipop as early as May. Last but not least, the Galaxy A7 (2016) is weirdly listed all by its lonesome under phase 2 of Samsung’s M plans, no doubt set to be joined before long by the Galaxy A5 (2016), Tab A, A5, A7, J5 and J7. Man, that sounds like a lot of work!

You can directly open the suggested webpage or even check out the full Google Search results page, all within the YouTube app.