While the former research firm says around 393 million smartphones were shipped worldwide between July and September 2017, with the IDC’s tally standing at a significantly lower 373 million units, the overall industry trend noticed by both analysis companies is very similar.

The market has “settled into a steady rhythm of single-digit growth this year”, estimated at 5 percent compared to Q3 2016 by Strategy Analytics, and 2.7 percent in the IDC’s preliminary results. 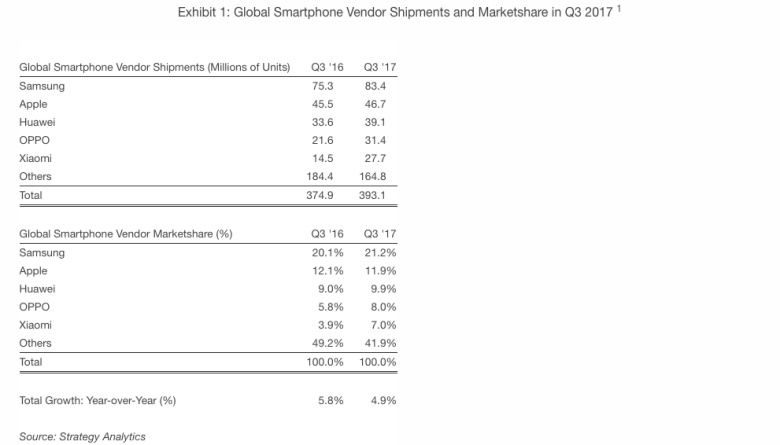 The top five vendors all consolidated their positions, boosting shipment numbers year-over-year to varying degrees, and widening the gap to the “others.” In first place, Samsung reported its “fastest growth rate for almost 4 years”, according to Strategy Analytics, rising 11 percent to over 83 million units, thanks to the hot new Galaxy Note 8, but also the steadily popular S8 and S8+ and lower-end A and J Series models.

Meanwhile, we already know the mobile industry’s silver medalist inched up from 45.5 to 46.7 million iPhones sold during the year’s third calendar quarter, followed closely by Huawei, at 39.1 mil.

China’s top export continues to grow at a remarkable pace, but it doesn’t look like the Mate 10 will be enough for a historical Q4 Apple defeat. Next year however, “the battle for second place” could be tighter yet. 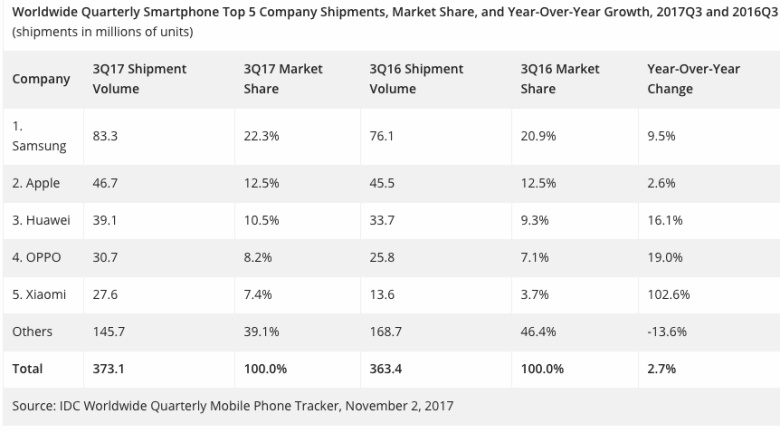 Believe it or not, Xiaomi could theoretically play a role in that battle as well, as long as it’s able to maintain current momentum. In addition to closing in on Samsung in India, the budget-focused Chinese OEM doubled its global Q3 sales, racking up almost 28 million units, just 3 mil or so behind OPPO.

But in fourth place, OPPO had a great quarter too, breaking its previous shipment record, as the R11 resonated with its domestic audience.