Check out what evidence has been arriving for the existence of a Samsung GT-I9507, presumably a new GS4 model.

Is Samsung ever going to be done with new Galaxy S 4 models? We saw that whole wave of variants of the original model, both running Exynos 5 Octa chips as well as Snapdragon 600s. We saw the special Google Play edition launch. Most recently, there’s been the Snapdragon 800-powered LTE-A model for South Korea. That introduction of a new SoC option had us wondering if a similarly enhanced GS4 could find its way to other markets, and recently saw evidence for a GT-I9506 that could be in the works for Europe. Today we’ve got more along the same line, with the first spotting of the GT-I9507.

No benchmark results this time – today’s find comes in the form of good old EXIF data. Now, right away, that’s possibly cause for concern, since it’s relatively trivial to fake such info before uploading an image – to Picasa, in this case.

We were curious to see if that model GT-I9507 showed up anywhere else, hoping to ease our concerns. Well, it doesn’t appear to have a UAProf file on Samsung’s servers (like the GT-I9505 and GT-I9506 do), but we did find a report from last month where GT-I9507 showed up in a drop-down box of model numbers on a Samsung webpage.

Of course, even if GT-I9507 is real, and an upcoming S4 model, we still have plenty of questions about it. A week ago, we might have assumed it would have a Snapdragon 800, but now with this launch of the Exynos 5420 – who knows? 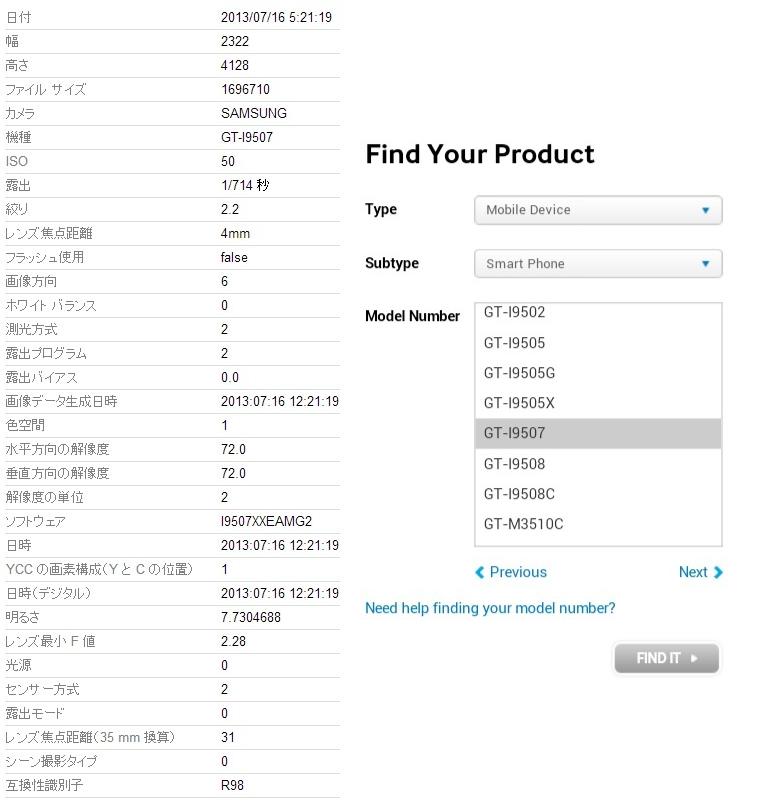