The “classically” designed Samsung Gear S3 will feature its own 4G LTE speeds soon, while those mouth-watering concepts look like a pipe dream.

With a spring collection of Apple Watch bands ranging from sporty to extravagant, and from cheap to outright prohibitive, plus literally more Android Wear 2.0 devices than we can count, Samsung looked outnumbered, overshadowed and largely focused on other things.

But the Tizen-powered Gear S3 is getting its own (small) update today, in a new LTE-enabled Classic incarnation for AT&T, T-Mobile and Verizon. Ma Bell and Magenta already sell the Gear S3 frontier with standalone LTE connectivity, while Big Red seems to have waited this long to pull the plug on its Gear S2 and swap it for a “classically” designed sequel.

Identical to the Frontier under the hood, the Samsung Gear S3 classic offers an added “touch of luxury” in a slightly lighter body, finally receiving the ability to call, pay “and more” without a phone nearby. We still need to hear from the manufacturer’s three carrier partners as far as release dates go, while pricing feels easy to guess. Around $250 on-contract, and between $350 and $400, no strings attached. 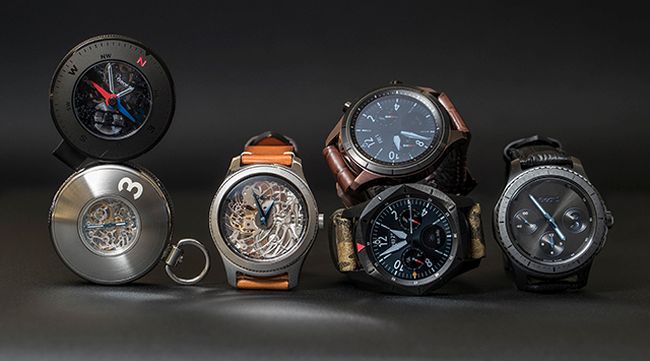 But wait, there’s more. Samsung actually traveled to Switzerland as well to “join the esteemed watch community at Baselworld 2017”, and unveil a trio of concepts based on the Gear S3 that are unlikely to ever become available for the masses.

Thanks a lot for making us drool over a “traditional watch” Gear S3 lookalike with “Swiss-made movement and detail”, an “updated take” on the Tizen smartwatch “taking premium finishes up a notch”, and above all, a “hybrid pocket watch version of the Gear S3.” Oh, well, there are also new colors actually coming to market, and a “Value Pack” software update rolling out for both the Gear S2 and S3 with Spotify and Nest apps, plus improved Alti/Barometer, Reminder capabilities, and S Health.