At IFA 2015, Samsung dropped the most compelling smartwatch we’ve seen from the company. Join us for a hands on look at the Samsung Gear S2!
Published 03 September 2015, 13:03 EDT

The original Gear S, which we reviewed late last year, was a hulking brute of a bracelet. For its sequel, Samsung sticks to the basics –Tizen OS, wristbound chassis– but almost everything else has been rebuilt, repackaged, or repainted into one of the most attractive wearables of IFA 2015. The company gave us a sneak peek into the new smartwatch here in Berlin, so join us for a quick look in our Samsung Gear S2 hands on!


Samsung actually announced two versions of its newest smartwatch here at IFA: the Gear S2 and the Gear S2 Classic. Each is a sleek round wristwatch rated to IP68 for water and dust resistance and topped with a 1.2-inch Super AMOLED display, but the Classic trades the sporty plastics of the stock S2 for ceramics and stitched leather. Each is built on a stainless steel frame with Gorilla Glass 3 screen protection, and the screens themselves are plenty colorful and crisp at 360×360 resolution (302ppi).

The Gear S2 packs all the sensors and radios we’ve come to expect from a modern smartwatch, and then some. Bluetooth 4.1 provides the wireless connection to the phone – and this time around, it’s any Android phone; you’re no longer consigned to using a Samsung smartphone in order to wear a Samsung smartwatch. As long as you’ve got at least 1.5 GB of RAM and you’re running Android 4.4 or higher, you’re good to go (for the most part, that is: Samsung tells us the Gear S2 may not work properly with devices using nonstandard APIs for calling or messaging functions). WiFi is here too in b/g/n flavors, as is NFC support for Samsung Pay. A separate “connected edition” of the standard Gear S2 will offer an independent 4G LTE radio that can support voice calls and data without the need to be connected to a handset (while the Bluetooth-only models do incorporate a microphone, it’s only used for apps like S Voice). Finally, the heart-rate sensor is still here along with its associated motion sensors to power S Health. The new version of Samsung’s fitness suite comes packing improved features like automatically logging when you’re running or walking, and telling you to stand up every now and then if you’ve been sedentary for a while. 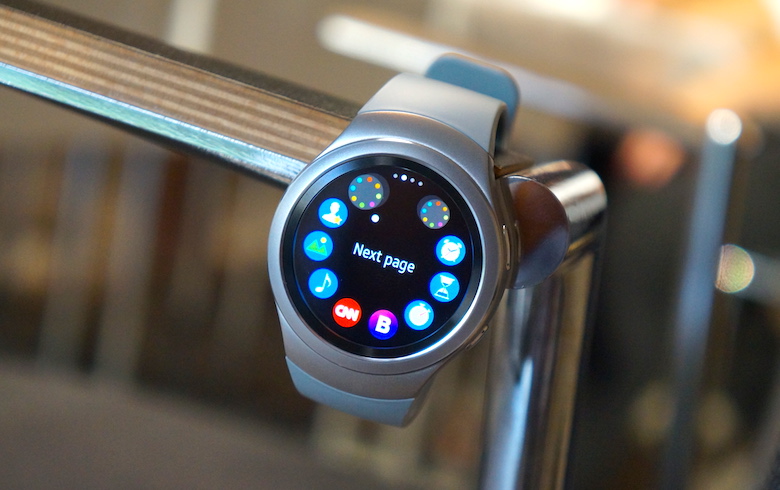 Probably the most widely leaked aspect of the Gear S2 is also one of the coolest. In addition to a capacitive touchscreen and side-mounted back and home buttons, the Gear S2 lets you control its software by rotating the bezel surrounding its display. Rather than some kind of capacitive swipe-pad, it’s a physical control that actually spins through mechanical detents, which adds a fun sense of tactility to the Gear S2 experience. The watch’s main menu is arranged in a series of circular pages, allowing you to navigate across apps just by spinning the ring. It’s also a shortcut control: from the watch face you turn the ring left to jump into notifications, or turn it right to access the built-in array of widgets. It takes some getting used to, but it’s no more complicated than, say, the Apple Watch. Our bigger concern is responsiveness: Samsung’s Tizen-powered watches are seldom as speedy as their Android Wear counterparts, and the Gear S2 did feel a bit slow on the whole. That’s to be expected with non-final software, but it did give us pause.

Samsung says the Gear S2 will last two to three days on a charge – a bold claim given its relatively small 250 mAh battery (by comparison, the Huawei Watch packs a 300 mAh power cell, and the larger 2nd-generation Moto 360 kicks it up to 400 mAh). Speaking of Motorola, Samsung takes a cue from its competitor when it comes to recharging: the Gear S2 ships with a Qi wireless charging dock for topping up, and this one uses magnets to keep the watch firmly in place. 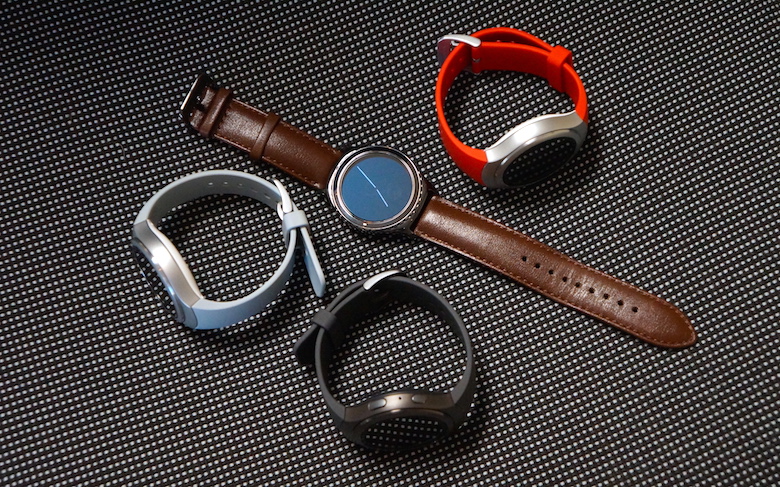 Each version of the watch offers removable bands, with the Classic bringing a standard 20mm attachment point and the standard model using a proprietary quick-release band. On the wrist, the watches feel quite small and light, with mass ranging from 42g to 47g depending on model – a far cry from the monstrous bracelet that kicked off the line last year. While Samsung will offer the standard Gear S2 in multiple colors, the Classic comes in any color you want … as long as it’s black.

Samsung is withholding pricing and availability for the moment, but you can expect the Classic to be priced a bit higher than its sibling when these hit stores. At press time, every major wireless carrier in the United States (other than Sprint) had committed to carry the Gear S2. 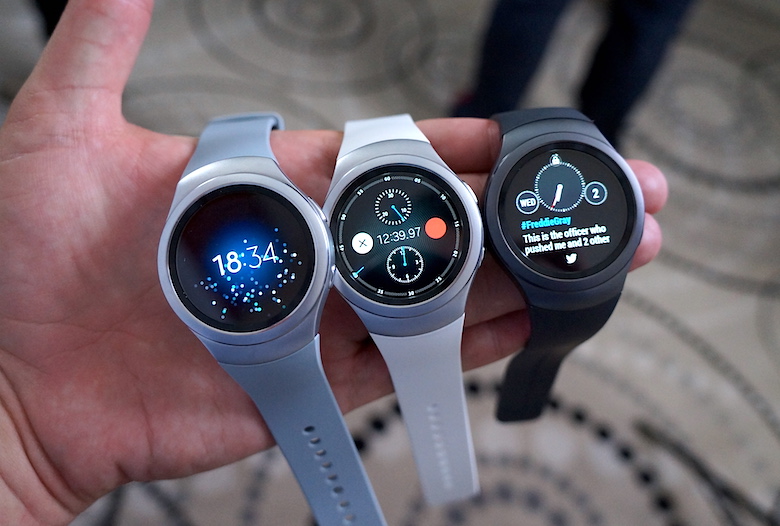 On the whole, the Gear S2 is a very compelling smartwatch from a company that seems determined to make 2015 its breakout year. Given its excellent hardware design, innovative software and newly broadened compatibility, it might very well be our favorite smartwatch from IFA 2015. Of course, the show’s just getting started: stick around for much more from Berlin as our coverage rolls on!

We may have to wait a bit longer for the official announcement of the new Google Pixel 4a, as new rumors suggest a new launch date in June