Now, that’s more like it! Finally, a rugged Galaxy Xcover-series device that won’t embarrass you in public and frustrate you every time you attempt any task a modern smartphone would treat as routine.

Following in the footsteps of the sub-par but super-strong 2015 Xcover 3 and 2016 Xcover 3 Value Edition, both of which featured 480p 4.5-inch screens, 5MP rear cameras and laggy processors, the 2017 Samsung Galaxy Xcover 4 looks like a breath of fresh air in pre-release benchmarks.

Not only is this SM-G390 fitted with a respectable 14nm-based quad-core Exynos 7570 SoC and contemporary Android 7.0 Nougat software, as revealed by Geekbench yesterday, but there’s also a 4.8-inch 720p display and 13MP main snapper in tow, according to preliminary GFXBench data. 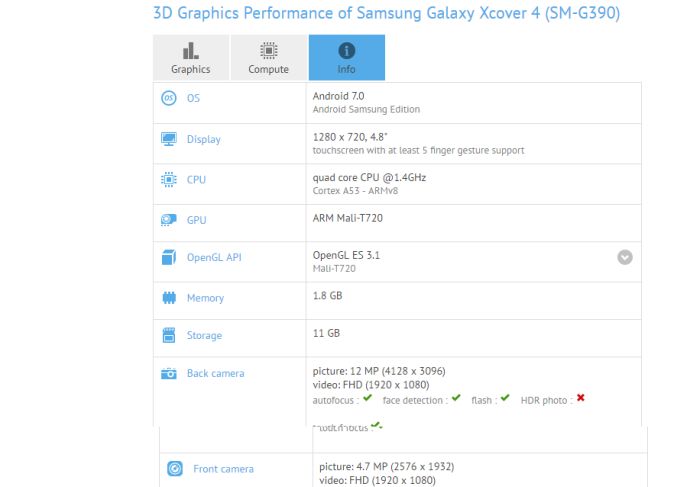 To be perfectly clear, the larger panel sports 1280 x 720 pixels resolution, up from 800 x 480 for past generations, producing a decent 306 ppi density instead of a lousy 207 count. Meanwhile, you get 8 extra rear camera megapixels, plus autofocus and face detection, a solid 5MP selfie shooter (up from just 2MP), double the old internal storage (16GB this time around), and 2GB RAM replacing the uneven 1.5 gigs tally.

All in all, you’d think we were looking at a pretty standard mid-ranger here, but remember, the Galaxy Xcover 4 should also retain its predecessors’ stellar resistance for everything from water to dust, shocks, drops, vibration and radiation.