Will Google effectively kill non-convertible Android tablets by making a more touch-friendly Chrome OS user interface, and expanding mobile app support to all Chromebooks launching in 2017 and “after”? It remains to be seen, but suffice to say it’s not looking good especially for high-end, costly slates like existing and future members of Samsung’s Galaxy Tab S family.

Still, there’s definitely at least one more premium Super AMOLED 9.6-incher in the pipeline, as confirmed by the GFXBench database today. The Samsung Galaxy Tab S3 carries SM-T820 and T825 model numbers for Wi-Fi-only and cellular-enabled configurations, thus following directly in the footsteps of the 2015-released SM-T810/T815, aka Tab S2.

We probably shouldn’t forget about lightly revised 2016 SM-T813N and T819N versions either, although this is clearly a long overdue bona fide upgrade. One that doesn’t appear to enhance the already sharp 2048 x 1536 screen resolution of the 2015 generation, substantially beefing up the processor under the hood however to a Qualcomm Snapdragon 820. 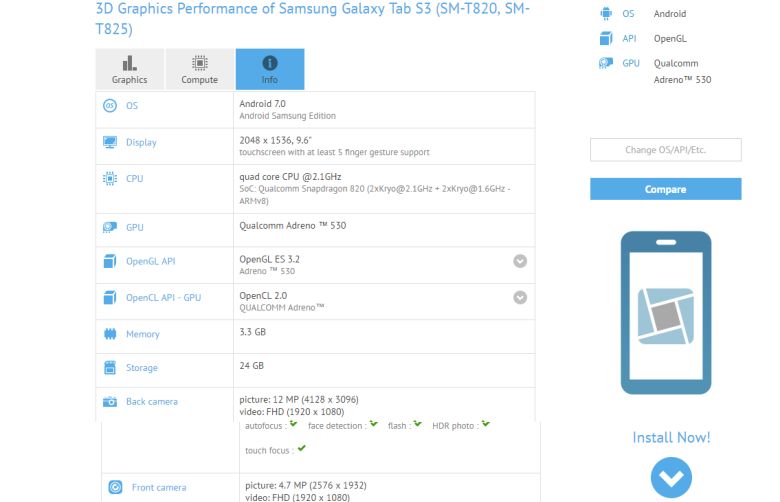 An 835 or even 821 would have been way better, but let’s keep in mind the Galaxy Tab S3 was rumored to pack a far humbler Exynos 7420 silicon just a few days ago. Besides, we want this to be good, but maybe not too good, and ergo still relatively affordable. On that note, 4GB RAM, 32GB internal storage, Android 7.0 Nougat, 12 and 5MP cameras sound pretty much ideal.