Between the highly anticipated Galaxy S7 and S7 Edge, the mysterious Gear 360 VR camera, and the imminent European expansion of Samsung Pay, next Sunday’s Unpacked event is already shaping up to be quite jam-packed (pun intended) with high-profile announcements.

Could there still be room for one more product introduction? We doubt it, but Galaxy Tab S2 follow-ups are also nigh, and they don’t look so special to merit their own dedicated unveils. In fact, they really don’t look like full-on sequels on paper, but rather underwhelming reiterations of the originals.

First uncovered by Zauba as they covertly made their way into India for last-minute testing, the SM-T819 and SM-T719 have moved one step closer to commercial releases with speed-probing benchmark visits. The two seem slightly beefier than their SM-T815 and SM-T715 predecessors, courtesy of octa-core Qualcomm Snapdragon 652 processors, but one must wonder why Samsung is fearful of adopting even higher-end chips.

Or at least bump up the RAM count from 3 to 4GB. Or further enhance the 2,048 x 1,536 pixel count on the “new” 9.7 and 8-incher. On second thought, the screens are probably sharp enough, the rehashed Galaxy Tab S2 pair instead badly needing a battery capacity boost. 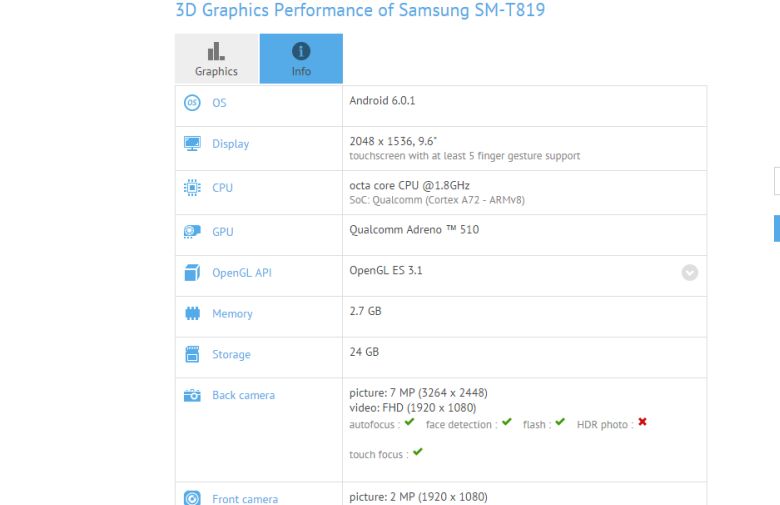 Granted, that would come at the expense of record-breaking slimness, which doesn’t bother us at all. We could definitely live with Tab S3s or Tab S2 Pros measuring 7 or 8mm in thickness, and touting 6,000 to 8,000 mAh cells.