The new ruggedized Samsung Galaxy Tab Active2 may not be your typical Android powerhouse, but it comes with plenty of compelling business features.

Benchmarked not too long ago, inadvertently detailed earlier this week, and even prematurely put up for sale a couple of days back in Europe, the Samsung Galaxy Tab Active2 is only now fully, officially and properly announced on the chaebol’s global newsroom website.

Available in “select markets from October 2017” (so, fairly soon), the ruggedized 8-incher uses a “customer-centric design inspired by professionals” to cater to various business segments and “industrial environments.”

On the surface, this is a pretty humdrum Android 7.1 Nougat slate wrapped in a protective rubber cover out the box, powered by a nearly two year-old mid-range processor and a not-very-impressive battery. 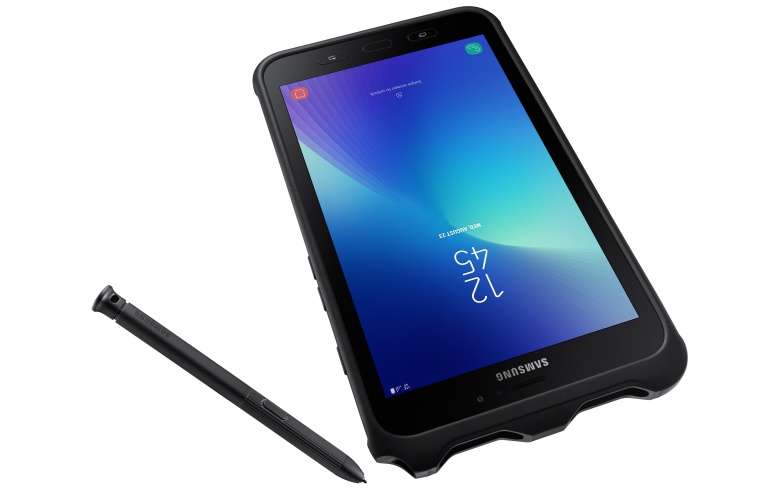 On the bright (and surprising) side, future enterprise users of the Galaxy Tab Active2 should know they can easily replace the battery if they so desire. Protected against water immersion (with IP68 rating), as well as “excessive pressure”, temperatures, environments, vibration and drops (courtesy of MIL-STD-810 certification), the new tab also packs a respectable 3GB RAM.

The 8-inch WXGA TFT screen with 1280 x 800 resolution is perhaps not ideal, but the product’s target audience may care more about the support for “gloved and wet touch” than pixel density.

Speaking of pixels, you get decent 8 and 5MP rear and front cameras, as well as LTE connectivity, fingerprint and facial recognition, and even the same bundled S Pen sold alongside the high-end Galaxy Note 8.

Through collaborations with IBM, Gamber-Johnson, Komatac, Otterbox, iKey and other “leading industry players”, Samsung can also hook you up with asset management software, explosion protection, optional portable barcode scanners and hand straps for enhanced workplace productivity. No words on pricing in this press release, but we already know the basic Galaxy Tab Active2 package costs around €500 on the old continent.

Google Pixel 4a will pack a single 12.2MP camera that shoots 4K videos at 30FPS, and thankfully, it will retain the 3.5mm headphone jack.

On today’s Pocketnow Daily, we talk about the new iPhone 12 leaks that tease a possible new design, OnePlus 8 series with wireless charging and more