Samsung’s taking a page from Apple’s design book with the 4:3 Samsung Galaxy Tab A.

Samsung’s MWC launches may have been all about new flagship phones, but even if nothing new debuted on the tablet front, it’s also been clear that the company is up to something there. Over the past few months we’ve checked out numerous leaks and rumors offering evidence for the development of quite a few distinct models, including some new OLED-screen tablets. We’re still waiting on those, but this week Samsung is going official with plans for several other new tablets, revealing the Galaxy Tab A series and the new Galaxy Tab 3 V.

The Galaxy Tab A (above) first appeared on our radar back in January, with the revelation of several model numbers. What we actually get is a pair of new mid-rangers, an eight-incher as well as a 9.7-inch model, both moving from the widescreen displays traditionally used by Samsung tablets to ones with 4:3 aspect ratios – at a 1024 x 768 resolution. Hardware specs include a quad-core 1.2GHz SoC, 2GB RAM, 5MP main camera (2MP front-facer), 16GB native storage, and microSD expansion. The pair will offer versions with LTE connectivity, and both will arrive running Android Lollipop.

Then we have the Galaxy Tab 3 V (below), launching in Malaysia as a new budget-priced offering. The seven-inch slate gets a 1024 x 600 resolution, 1.3GHz quad-core SoC, 1GB of RAM, 8GB storage (again with microSD), and pair of 2MP cameras. This time, however, Samsung’s releasing the tablet with KitKat installed. Sales are set to start for the equivalent of about $135. 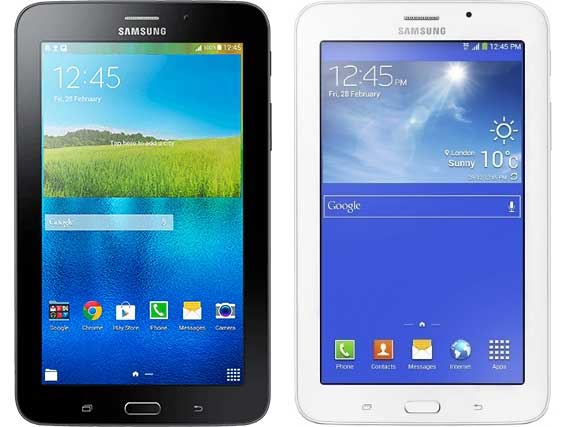