As long as the Galaxy S9 and S9+ are technically not out, Samsung might as well try to build even more buzz around the fast-approaching Unpacked event in Barcelona. Enter a fresh trio of short videos previewing some of the things the chaebol is likely to highlight at its pre-MWC February 25 press conference.

The three 15-second clips are up on the company’s Mobile Korea YouTube channel, and although they come with no text or narration, they’re still pretty self-explanatory. One of them appears to focus on speed, another does a great job teasing top-notch low-light camera performance, while the third and last one essentially confirms Samsung’s Animoji-challenging efforts.

3D Emoji features, or however Samsung’s animated emojis may be called, are definitely coming with support for a wide range of facial expressions, movements and emotions. The primary shooter on the back of both the S9 and S9 Plus should offer variable f/1.5 – f/2.4 aperture, with the former value no doubt capable of producing exceptionally crisp night shots.

As for the speed part of the Galaxy S9 improvement equation over last year’s already snappy S8 and S8+, we coincidentally have a new benchmark to share with you today as well. This further confirms the S9+, aka SM-G9650, will provide 6GB RAM in combination with a Snapdragon 845 processor, a super-high-end configuration awarded a total of over 265,000 AnTuTu points.

That’s significantly speedier than any of the world’s existing phones, at least on paper, and Android 8.0 Oreo also plays its part. As does an 18:9 screen listed with native 2220 x 1080 pixel resolution, which you’ll obviously be able to elevate to a maximum of 2960 x 1440 pixels. 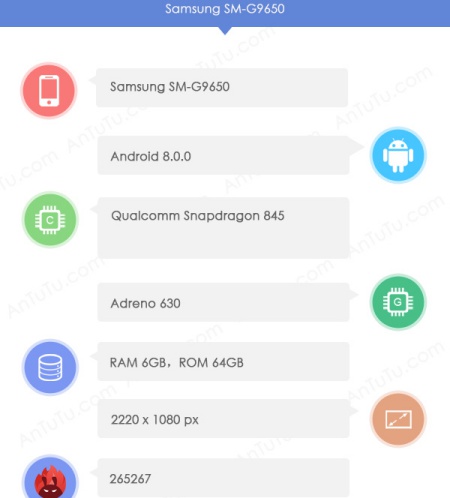