Samsung had lofty initial expectations for Galaxy S9 and S9+ sales, which didn’t exactly get off to a flying start in the company’s own backyard. But even though high-end smartphone competition is constantly intensifying, and several key markets are showing clear signs of stagnation, the latest “Infinity Display” flagship duo has reportedly pulled off a strong launch month showing.

The most recent Canalys estimates put the GS9 pair at a solid 8 million shipments after just four weeks of global availability, essentially on par with the S8 and S8+ a year ago, but roughly one million units behind the first-month performance of the S7 family back in 2016.

That probably means the Galaxy S9 series is looking at lower total shipments of around 45 million units compared to the 48 mil or so racked up by the S7 and S7 Edge in their launch year. But combined S8 and S8+ shipments in 2017 only reached 41 million units, and beating the first “Infinity Display” generation would be quite an accomplishment for this year’s largely iterative S-series upgrades. 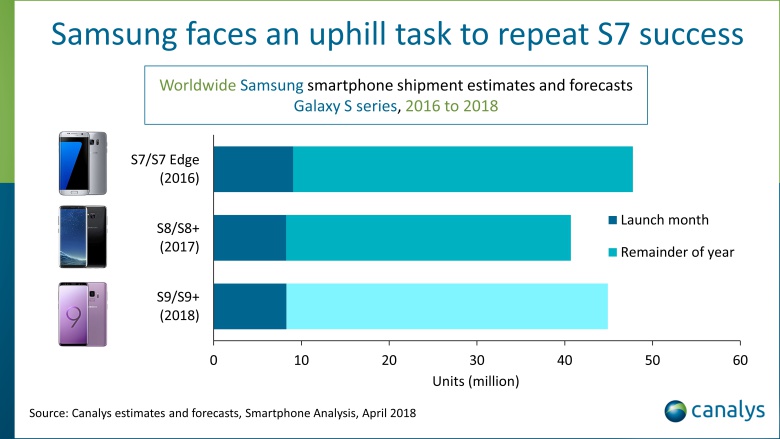 Back to the 8 mil score posted in a single month, Samsung has one more reason to feel proud about the early popularity of the Galaxy S9 and S9+, as Apple shipped less than 14 million iPhone X units worldwide over 2018’s entire first calendar quarter. That’s down substantially from a Q4 2017 tally of 29 mil which merely included November and December sales.

Obviously, Samsung’s Android flagships are enjoying far stronger momentum than Apple’s “dead” and buried X, which is guaranteed to be outsold by the S9 duo in Q2. By the way, the plus-sized, dual camera version is significantly more successful than both the “regular” Galaxy S9 and last year’s S8+.