Samsung Galaxy S9 Plus vs Note 8: A tough one… (video)

Calling out a winner for this Galaxy S9 Plus vs Note 8 comparison really depends on your needs. If you depend on the S Pen, then there’s no way around it, you need the Galaxy Note 8. If you don’t, which is the reality of most people, then I’d recommend you go for the newer Galaxy S9+.
Published 13 March 2018, 15:58 EDT

Yes, it’s about that time for our Galaxy S9 Plus vs Note 8 comparison! One of the most important questions we get on social media is whether it’s worth upgrading to a new Galaxy S9+. Our review was mostly focused on answering this from a Galaxy S perspective, but that wasn’t really the hottest Galaxy in town.

Phablets, phablets… They’ve got their benefits, and their complications. These two are some of the most expensive money can buy, but also the most useful.

In the hand, both devices feel literally the same. The Note 8 has sharper corners, but the aluminum trim feels just as pronounced on both, though I do hear the Galaxy S9 brings a stronger build of aluminum. Same glass on glass sandwich across the board, same love for fingerprints and smudges, so I’d stick to another color variant that’s not black if I were you. On either phone.

Dimension wise the Galaxy Note 8 is actually the larger phone overall. We’re talking 4mm taller, 1mm wider, 0.01mm thicker, and 6 grams heavier. A complete oddity since the Galaxy S9+ has a 6% larger battery. The Note 8’s gorgeous Infinity Display is also slightly larger at 6.3-inches diagonal vs 6.2 on the S9 Plus, but both sport the same Super AMOLED technology, the same QuadHD+ resolution capabilities, and also Corning Gorilla Glass 5. 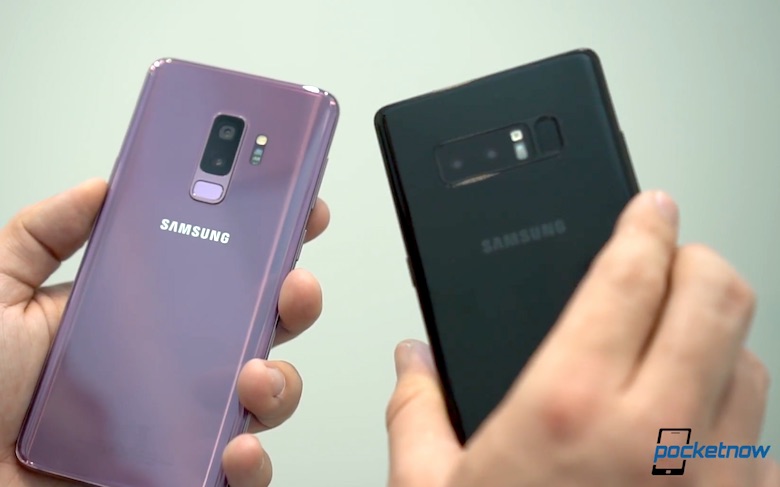 Storage options start at 64GB (expandable), and the 6 gigs of RAM are also the same. Wi-Fi and Bluetooth antennas are the same spec at A/C and 5GHz respectively. Both devices are also IP68 water and dust resistant, and support fast and wireless charging.

Really what makes the Galaxy Note 8 stand out is the S Pen.  This feature alone turns this phone into that productivity workhorse that you’d like to bring around to doodle notes or sign a PDF… but… that’s it. After using a Galaxy Note for the past 6 generations, I will say that it’s nice to have the S Pen, but I rarely use.

The Galaxy S9+ on the other hand might look similar, but its benefits are significant. The new Qualcomm Snapdragon 845 processor is not just 25% faster, but also more battery efficient. It also supports faster Gigabit LTE speeds.

It also solves our main complaints about the Note 8. The Galaxy S9 finally brings stereo speakers for more immersive content consumption, with support for Dolby ATMOS. The fingerprint scanner is now placed where regular human hands can reach, where that proves to be a serious chore on the Galaxy Note 8. The Galaxy S9 even has Intelligent Scan to blend facial recognition with the Iris Scanner, where the Note 8 only has the later. 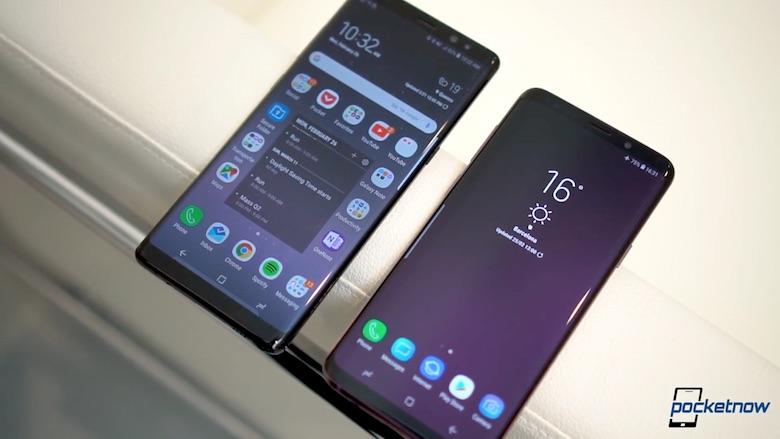 Hardware isn’t the only thing that improved. One of our biggest complaints about Galaxy Notes is software updates. Sure the Galaxy S9+ is still a version behind in Oreo, but I’d call that a better option than being a year behind with Nougat on the Note 8.

Other than that we have AR Emoji on the Galaxy S9+, which I sadly still can’t recommend given its terrible implementation.

As for Bixby, it seems the Note 8 is still stuck a version behind, so features like Bixby Vision do work, and they even claim AR capabilities, but only the S9 can go further with features like translation and makeup. 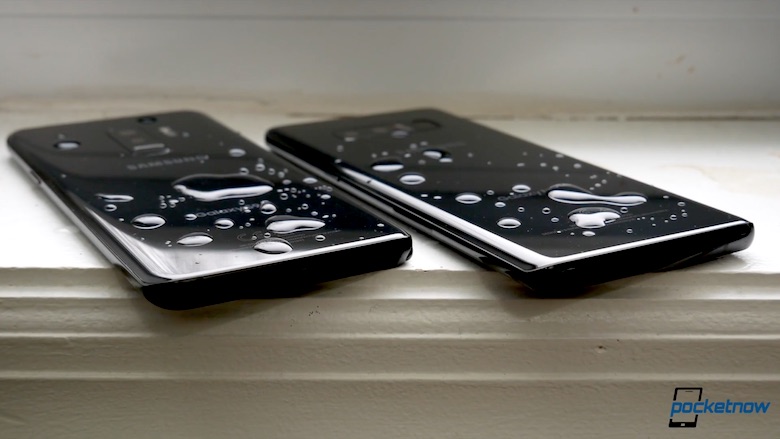 The Galaxy Note 8 was my primary Daily Driver pretty much until the Pixel 2 XL replaced it, and now the Galaxy S9+. Performance feels smoother on the Galaxy S9+ by a meager margin. It’s as if the Note 8 sometimes waits an extra second to respond to a gesture. You won’t notice any differences when playing games, though. Both devices feel just as powerful.

When it comes to phone calls, I seriously feel the Galaxy S9+ has a louder earpiece. The Note 8 isn’t bad, but not as clear as the newer smartphone.

Things like battery life are also better on the Galaxy S9+. I wouldn’t say by a long shot, but at least I know the S9+ will end the day with at least 30% to spare, where the Galaxy Note 8 is just ok. 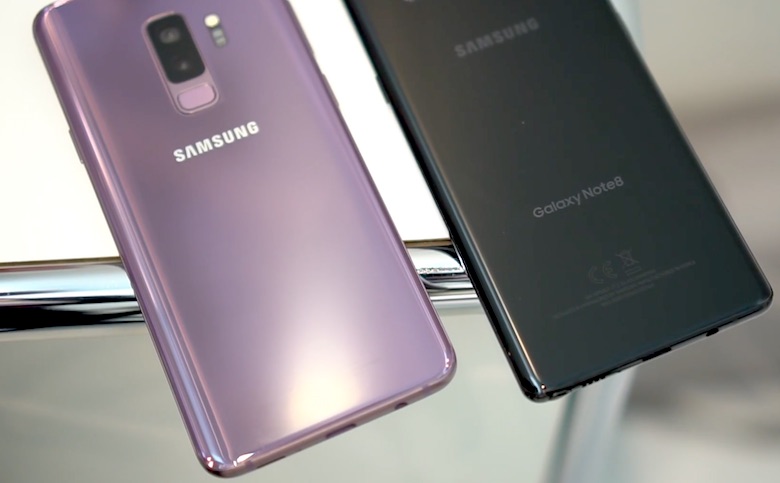 The camera is where things become interesting. Technically, the new Dual Camera system on the Galaxy S9+ is more versatile, with variable f/1.5 or f/2.4 aperture for low light and bright scenarios respectively. Every other technical specification is similar, with the same megapixel count, the same specs for the telephoto lens, the same specs for the front facing camera. In theory, the improvements on the Galaxy S9 should mean better photos overall, but honestly, I can’t tell much of a difference. I do notice the brighter aperture brings better low light on the S9, but it has proven to be sluggish with moving subjects.

I love that the Galaxy S9 brought the same Live photo capabilities of the Note 8. Apply effects after the fact, or stick to the wide shot if things went bad.

What I will praise about the Galaxy S9+ is its capabilities as a video machine. It can record 4K video at 60fps, 1080p at 240fps, and even Super Slow Mo video at 960fps at 720p – all features that the camera I use for this video can’t do. The Note 8 is obviously no slouch, and stabilization on both phones is great, but the Galaxy S9 clearly has significant improvements in this department. 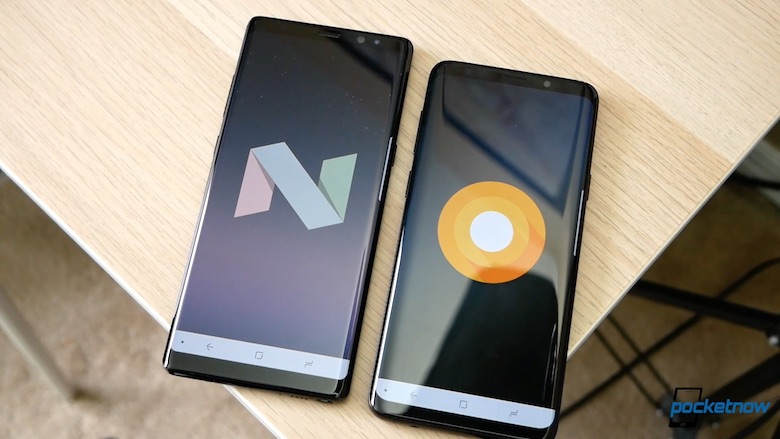 To conclude, it would seem that the Galaxy S9+ is a more complete phone. We have significant improvements in the processor with the Qualcomm Snapdargon 845, newer software, stereo speakers, and enhancements in the camera system.

Calling out a winner really depends on your needs, though. If you depend on the S Pen, then there’s no way around it, you need the Galaxy Note 8. If you don’t, which is the reality of most people, then I’d recommend you go for the newer Galaxy S9+.

It’s the overall better buy, where you get some unique features that many phones today don’t have. Obviously you could wait for the next Galaxy Note that’ll most likely bring all these improvements, but that’s still a good 6 to 8 months away.

Today’s deals come from Samsung and Amazon, where we can find the latest Samsung Galaxy S21 series, the Google Pixel 4a 5G, and more on sale