A no doubt advanced but unfinished prototype of the upcoming Samsung Galaxy S9+ has just paid Geekbench a fresh visit with Snapdragon 845 inside.

Whether Samsung plans to unveil its “next big thing” at CES 2018 in January or February’s MWC (most likely, the latter), the Galaxy S9 and S9 Plus are surely drawing near. Hence, speculation is running wild over the design and specifications of quite possibly the biggest threats to the iPhone X’s ascending popularity.

Internal hardware development must be pretty much finished, with a number of last-minute software optimizations now probably in charge of squeezing the most out of a Snapdragon 845 or Exynos 9810 processor backed by 4 or 6GB RAM.

The first appearance about a month ago by an Exynos-powered Galaxy S9+ variant at one of the world’s top benchmarking authorities was far from encouraging, but a “regular” Galaxy S9 also stopped by Geekbench shortly thereafter, posting considerably higher CPU performance scores.

Now it’s time to assess the pre-release muscle of a Samsung SM-G965U1 model, aka a Galaxy S9+ with a Snapdragon 845 inside. Also, 4954 MB of memory, which will likely translate into a real-life 6GB RAM count once some system resources are maximized. 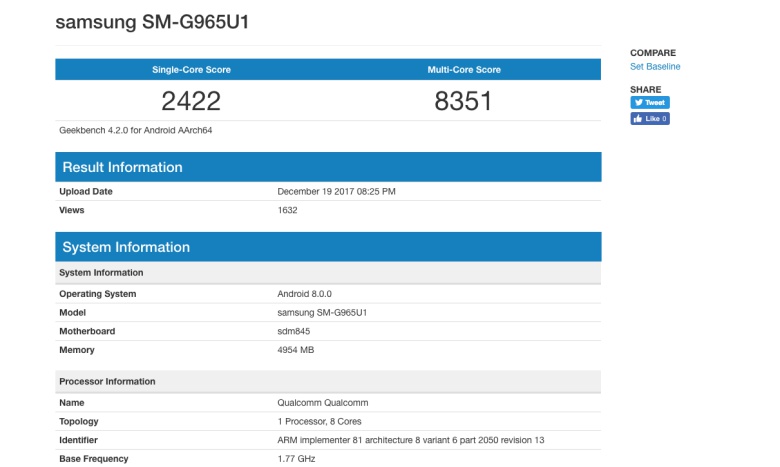 We’re fairly certain this is not the final product, running a commercial OS and all that, but Android 8.0 Oreo is already on board. As far as synthetic test results go, the no doubt advanced Galaxy S9 Plus prototype easily beats the Galaxy Note 8 in both SD835 and Exynos 8895 derivations.

We’re looking at 2,400+ and 8,300+ single and multi-core scores respectively, which are significantly higher than any Snapdragon 835 phone on the market today. But they’re still short of Apple’s chart-topping 4,000+ and 10,000+ A11 totals across the entire 2018 iPhone family. Yup, at least on paper, and in this particular benchmark, the Galaxy S9+ has nothing on the iPhone 8, 8 Plus or X.