Samsung’s “next big thing” is still at least two months away from an official announcement (probably more like three or four), but “pilot production” has reportedly already begun, and we all know what that means.

The usual “supply chain sources” will soon ramp up their speculation, professional leakers may start receiving tips, schematics and even renders, while prototype benchmarking is already in full swing. Or so it seems, because it’s never easy to prove the legitimacy and accuracy of these pre-release performance tests.

But if the first purported Geekbench visit of the Galaxy S9+ looked sketchy due to terribly low single and multi-core speed scores of around 1200 and 3800 points, 2680 and 7787 totals respectively sound more in line with what we expect from Samsung’s new in-house Exynos 9810 SoC. 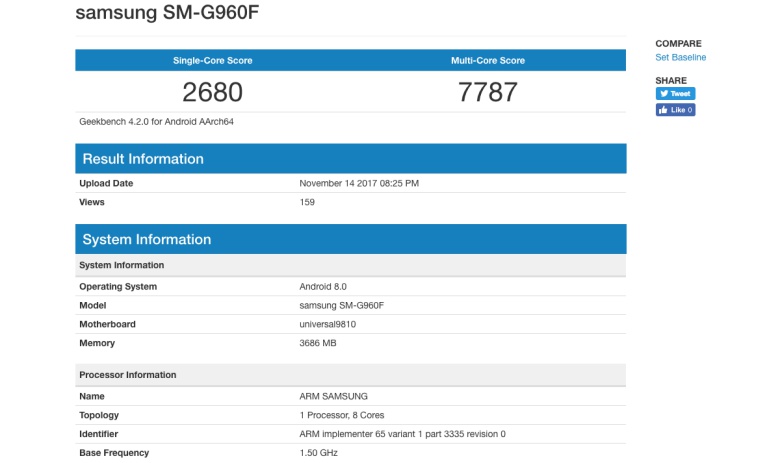 The beefed-up results belong to an SM-G960F device that clearly follows in the footsteps of the SM-G950F, aka 5.8-inch “Infinity Display” Galaxy S8. This presumably unpolished Galaxy S9 is already capable of posting significantly higher scores than commercial S8, S8+ and Note 8 units, which sounds encouraging… and logical.

But there’s still a lot of ground to cover until rivaling the towering (synthetic) performance of Apple’s iPhone X or 8. More importantly (and worryingly), this Galaxy S9 version packs the same 4GB RAM as the recently benchmarked S9+, down from 6 gigs of the good stuff on the Note 8. Could Samsung be really going back to 4GB memory, with 6 gig configurations either non-existent or restricted to a handful of markets? Let’s hope not.

On today’s Pocketnow Daily, we talk about what could be the end of the Samsung Galaxy Note series, new Apple event leaks, and more.