It should come as no surprise that a 5.8-inch Samsung Galaxy S9 Active is in the pipeline, packing an extra-large battery, and otherwise retaining the key specs of the “regular” GS9.
Published 25 April 2018, 10:56 EDT

It’s been a while since Samsung last released a diminutive version of a Galaxy S-series flagship, and what initially looked like a China-specific 5.8-inch S9 with a flat screen and dual rear-facing cameras may end up as a jumbo-sized Galaxy A8 Star.

But there still might be a derivation of the popular new hero devices in the pipeline. If history is any indication, the SM-G893 should see daylight stateside sometime in the summer, primarily targeting AT&T subscribers, and possibly expanding to other carriers shortly after launch.

No prizes for guessing the official branding of this 4000 mAh battery-packing 5.8-incher, following in the footsteps of the SM-G892, aka Galaxy S8 Active, and SM-G891, known to customers as the AT&T-exclusive S7 Active. 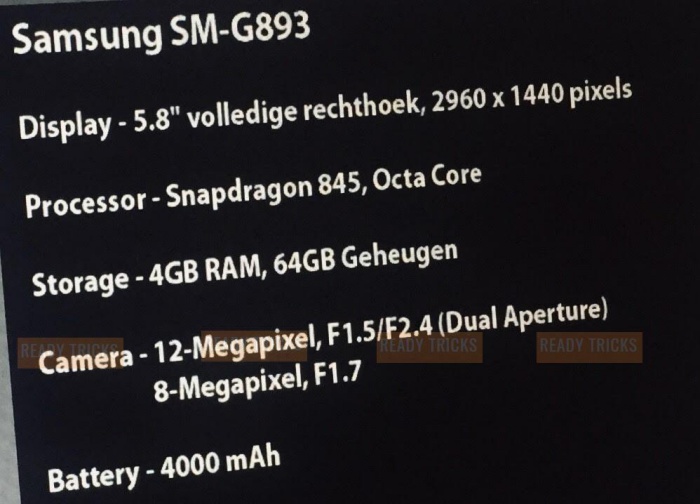 If that sounds familiar, it’s probably because the S9 Active is expected to borrow heavily from the “regular” GS9, just like the S8 Active and S7 Active strongly resembled their non-rugged cousins.

Basically, if you fancy a Galaxy S9 with minimal curves, some added bulk and muscle, as well as 1000 extra mAh juice, keep waiting a few more months. And yes, the Galaxy S9 Active should employ the same Dual Aperture tricks as the S9 to maximize the single rear shooter performance in all lighting conditions.

The upcoming Android TV-based streaming dongle from Google will come with a remote of its own, unlike its Chromecast predecessors.